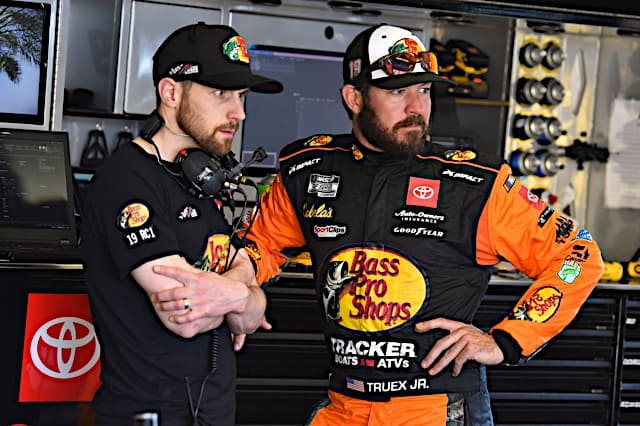 After a few days off, the NASCAR Cup Series heads to Charlotte Motor Speedway for the traditional Coca-Cola 600. The 400-lap race starts at 6 p.m. ET on Sunday, May 24, 2020 and will air on FOX. Get your daily fantasy NASCAR DraftKings roster ready to rumble!

The Coca-Cola 600 is a race held on Memorial Day weekend each year, typically the biggest Sunday in motorsports. It feels extra special to have this race when tradition has all but gone out the window due to the COVID-19 pandemic. (Both the Indy 500 and the Grand Prix of Monaco, the other big races run on this day, have been postponed.) Even though fans won’t be in attendance, it’s nice to see patriotic paint schemes abound throughout the cherished event.

Not only will Sunday be the Cup drivers’ third race in seven days, but it’s also the longest race of the season. Competitors will need to be in top physical shape, prepared to get through the challenge ahead.

Unlike the last two races at Darlington Raceway, there will be qualifying at 2 p.m. ET on Sunday. Be sure to check the qualifying results in case you need to make changes to your lineup. However, Wednesday’s Charlotte race will be based on how the field finishes in the Coca-Cola 600. The top 20 will invert, just like Darlington, while those who finished 21-40 will start in the same position.

Since Sunday’s race runs in the evening, the track will likely get cooler as the race goes on. This trend means some vehicles will be better and lead laps early on, while others should adapt to the temperature changes late in the race. Keep these factors in mind when creating your daily fantasy NASCAR DraftKings lineups.

Before I continue on with my picks, here’s a quick review of last Wednesday’s results from Darlington.

Ouch. Cole Custer really struggled again, and it left a big dent in my score. Kurt Busch also did not perform where I thought he would (or where he thought he would). Overall, though it wasn’t too far off from the points needed to cash despite those issues.

Truex has performed outstanding in recent years at Charlotte. The No. 19 Joe Gibbs Racing driver won three of the past six races there, including 2016 where he led all but eight laps. He also won this race last season after starting 14th and leading 116 circuits. In seven of the past eight Charlotte events, in fact, Truex has finished in the top five. I think it’s safe to say he’s good here.

Truex is still searching for his first victory of the season, but it could very well come at the Coca-Cola 600. It’s a great opportunity for him to capitalize on the growing chemistry with new crew chief James Small.

In case you missed it Wednesday, Elliott got the short end of the stick late in the Toyota 500. He was well on his way to a top-five finish before Kyle Busch turned him on the frontstretch.

Will Elliott issue some on-track payback? Prior to that incident, he had three consecutive top 10s, including two fourth-place results at Auto Club Speedway and Darlington. He also scored above 40 DraftKings points in every points-paying race except Wednesday.

Elliott’s history at Charlotte hasn’t been the best, but he did end last year’s Coca-Cola 600 in fourth. Additionally, in 2018, he gained 11 positions to finish 11th. Though he has crashed out early a couple times, Elliott has still led 158 laps in seven races at CMS.

If this Hendrick Motorsports driver can head to the front and obtain a good result, he should have a high DraftKings score. Keep in mind this four-car team showed strong speed across the board last week at Darlington.

Though Truex has been good at CMS, Johnson is no slouch, either. The seven-time Cup Series champ has won there eight times, with his most recent victory coming in 2016. He also won the 2014 Coca-Cola 600-mile race, an event where he led 164 laps.

Johnson, too has had good results recently here, earning five top 10s in the past six Charlotte events. Plus, the past three races, he started well outside the top 10. Can you say position differential points?

So far this year, Johnson has three top-10 finishes; that includes an eighth in Wednesday’s race at Darlington. He obtained 29 positions and scored 65 DraftKings points for those who rostered him. Johnson knows how to get a good result at Charlotte and should be in contention on Sunday.

Let’s face it: Charlotte is not Bowyer’s best oval track. However, he has shown a lot of speed this year. Last week, he led 71 laps and won the first two stages at Darlington before getting caught up in traffic, slamming the wall and cutting his tire down. He still scored 45.8 DraftKings points; those bonuses from laps led and fastest laps really helped.

Additionally, in the FanShield 500 at Phoenix Raceway, Bowyer finished fifth and scored 52 DraftKings points. If his team brings another fast racecar Sunday or if pit strategy can get him near the front late, Bowyer could get his first top 10 at CMS since 2013.

I really don’t know why Newman is priced this low. Set at only $6,500, he’ll probably be one of the highest-owned drivers on the slate. That’s OK, though; as long as Rocket Man doesn’t qualify inside the top 10, he should easily score enough DraftKings points to get you in the green. That’s because of his ability to end races better than where he started. Remember, each position gained adds a bonus point to your overall score.

In his first race back last Sunday (May 17), Newman finished 15th after starting 21st, which gave him 35 DraftKings points. And though Wednesday’s pit strategy didn’t work out in his favor, Newman still crossed the line in 14th place. (The team stayed out later than others hoping a rain shower would give them the win.)

The Coca-Cola 600 will be a real challenge for Newman, still recovering from his Daytona 500 crash. Hopefully, the No. 6 Roush Fenway Racing pilot will qualify in the teens and earn a top-10 result on Sunday.

LaJoie generally doesn’t have good results at Charlotte, but there are exceptions. Last season, he started 30th and ended 12th, his best result at this track. Also, in the Pennzoil 400 at Las Vegas Motor Speedway earlier this year, he gained 14 spots and finished 16th. Lajoie earned 43 DraftKings points as a result, one of his best career daily fantasy performances.

Even if Lajoie only gets a few extra spots from his starting position, that’s really all he needs to help you win at NASCAR DraftKings. His price allows you to fit one or two top-tier drivers in your lineup.