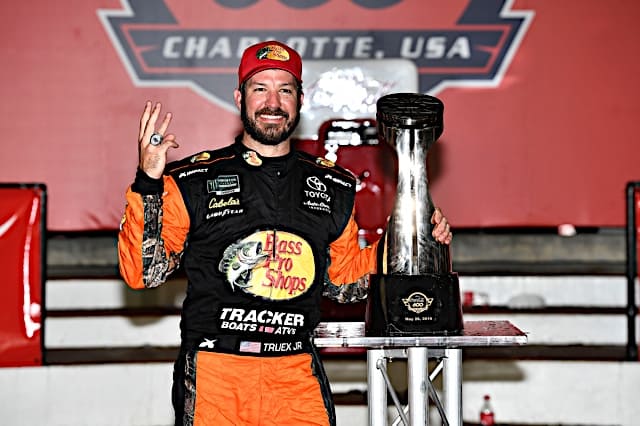 For surprisingly just the second time this season, the NASCAR Cup Series is going 1.5-mile racing.

The Coca-Cola 600 has been one of the sport’s premier events since the first iteration in 1960. Although there were other 600-mile Cup races here and there in the late 1960s, none ever stuck to the wall like the then-World 600 did at Charlotte Motor Speedway.

The 600 has almost always been scheduled to run on the same day as the Indianapolis 500, and in recent years the two events had been joined in the morning for Americans with the Monaco Grand Prix, the crown jewel of the Formula 1 season.

However, this year has been decimated by COVID-19, and the 600 is the last race of the three standing for this weekend; Monaco has been completely cancelled, while the Indianapolis 500 is now scheduled to run in mid-August of this year. All eyes will be on NASCAR on Sunday night.

Unlike the other races that NASCAR has held without fans this past week, there will be a single-car qualifying session earlier in the day to determine starting order. However, due to health and safety guidelines, teams have already made pit stall selections based off of finishing order of Wednesday’s Cup race.

Also, with only 0.1 points awarded for each lap led by a driver, the need for a dominator is less important when building a winning lineup. The 400-lap race will have a total of 40 points up for grabs in this category. Take note when building your roster and focus on mid-pack competitors who can climb up toward the front on race day.

Here’s my team for Sunday afternoon’s race. Note: the following Charlotte-specific statistics cited are on the oval layout, not on the ROVAL layout used in the track’s fall event the past couple of years.

It’s fair to say that Truex has been hot-and-cold this season, in part due to having a new crew chief after years of working with Cole Pearn, and has struggled to develop the same chemistry he had with Pearn with James Small due to the months long break this spring. Toyota has also been very up-and-down itself this season, with Truex himself not even being in the pole drawing last week for the first race back due to being 15th in points at the time.

That being said, Truex has been very good at Charlotte very recently, with top-three finishes in all but one of his past seven starts there and all three of his wins have came in that span as well.

Surprisingly, Hamlin has actually never won at Charlotte. Which is such a strange statistic; Hamlin has always been known for good performances at physically-enduring racetracks, like Pocono Raceway back when those races were 500 miles or 500-lappers at Martinsville Speedway. You’d think he’d have some trophies in the sport’s longest race in his cabinet, but that just hasn’t been the case.

What’s more is that Hamlin has the best pit stall for the 600 as a courtesy of winning Wednesday’s race. With aero push, this could prove to be a very crucial element to Hamlin’s game late in the going of Sunday’s race.

The best Cup driver this season without a victory has easily been Elliott. If one or two tiny things hadn’t happened at Phoenix and at Darlington this year, Elliott could have potentially been walking into this track with two wins on the season. Alas, mistakes that weren’t necessarily his has cost him a pair of victories.

Hendrick Motorsports has a very good 1.5-mile program, with Alex Bowman finding a lot of success in the discipline. While it wouldn’t be a stretch at all to go with Bowman over Elliott, it would be dumb not to at least take one of these drivers. Elliott is just due for a win at this point.

For having no practice time, Kenseth hasn’t been that bad at all in his shocking return to the sport. He got a top-10 finish last weekend, then had another solid night on Wednesday before spinning coming out of the pits on cold tires at full speed. Which really can’t be held against him, because that can be tricky enough without going a year-and-a-half between doing it.

Kenseth should be a solid pick here. He knows how to pace himself in long races such as this, and while I don’t think he’s going to get a win this weekend, he could get another lead-lap top-10 finish. Which would make him an excellent value at this price.

Preece doesn’t have a lot of experience at Charlotte. But I’ve liked the speed this driver has shown this year; he just hasn’t had the results to back it up. Preece is a much better driver than his 32nd-place ranking in points would indicate, and if this team can just start finishing some races, he isn’t going to be in this tier for much longer.