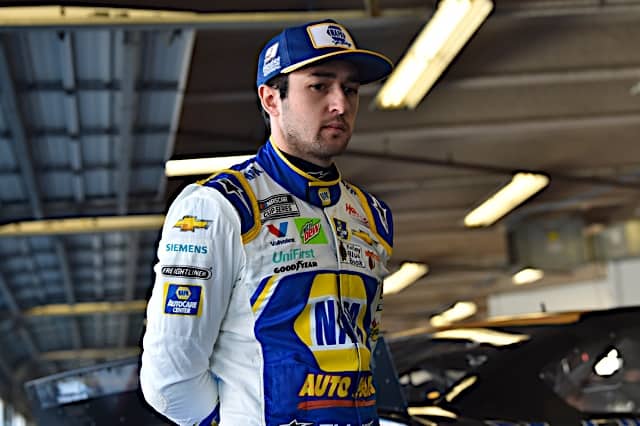 Did You Notice? Chase Elliott‘s most famous NASCAR moments are being on the losing end of battles with two Joe Gibbs Racing rivals? NASCAR’s Most Popular Driver is finding out no amount of screaming fans can keep him from being nudged out of the way in crunch time.

The second incident occurred Wednesday night (May 20) at Darlington Raceway with reigning Cup Series champion Kyle Busch. Busch and Elliott were fighting hard with Denny Hamlin for the lead on a green-flag restart. Busch’s No. 18 Toyota dove hard into the inside in turn 3 but didn’t have the momentum to complete the pass. As often happens here, Busch lost speed pinched off the corner, a line which had Elliott blowing by him on the frontstretch for second.

That is, of course, until Busch’s hard right turn into Elliott’s rear bumper.

Elliott’s initial response was a middle-finger salute. The No. 9 crew chief, Alan Gustafson, who once wrenched for Busch during his HMS tenure, had an expletive-laced conversation with Busch after the race.

“I mean, this is right in the middle of the straightaway,” FOX play-by-play man Mike Joy said on replay.

“That’s more than just a misjudge by an inch,” added Jeff Gordon. “That’s not even close.”

“I know I made a mistake and misjudged the gap,” Busch admitted, exasperated. “I got too many friends on that team to do anything like that on purpose.”

But it took less than two days for anger to melt in the face of apologies. Busch called Elliott “a class act” in a conversation one-on-one. Then, in front of reporters, the young driver mellowed out relating his respect for the two-time champion.

“I learned that he made a mistake and I was on the wrong end of it,” Elliott said. “But he apologized to me… Kyle and I have gotten along for many years. I feel like I’ve raced him with a lot of respect because I respect him. I think he’s really good, and he is.

“A two-time champion should be respected, in my opinion. I think he’s earned that right.”

Sound familiar? Back in the fall of 2017, Hamlin hit Elliott’s back bumper during the fall race at Martinsville Speedway. It kept the second-year driver from victory lane and a spot in the sport’s Championship 4 that came with it.

After the race, Hamlin was handed the mic and hit a racetrack packed full of race fans with… honesty.

“I’m not sitting here saying I wrecked him on purpose. I moved him out of the way and he spun out.”

Hamlin followed up with an apology letter, but in that case Elliott chose not to talk.

“I’m still pretty frustrated about it,” Elliott said about the incident a week later. “I’m definitely not happy.”

Two weeks after the crash, at Phoenix Raceway, Elliott wound up retaliating and putting Hamlin in the wall. However, both drivers wound up missing out on the 2017 Championship 4 as a result of their squabble.

Fast-forward to 2020, and it’s possible the same eye-for-an-eye will happen again. Elliott has shown Busch more respect and the wreck happened during the regular season, both mitigating factors. But it doesn’t erase the fact Elliott has gotten the short end of the stick.

The tough luck is magnified when you recognize Elliott’s the front man for NASCAR’s version of the New York Yankees: Hendrick Motorsports. HMS, like the Yankees dynasty, has always had an aura of racing royalty surrounding it, setting a NASCAR record with 12 championships while racking up 257 victories.

HMS drivers ushered in the corporate era of NASCAR: clean-cut, clean racers who let the strength of their equipment, not the bumper, do the talking. Jeff Gordon was the Wonderboy; he jazzed up Fortune 500 companies, his on-track incidents minimal compared to Dale Earnhardt Sr. bulldozing opponents as the Intimidator. From Gordon to “Iceman” Terry Labonte to Jimmie Johnson, wreckers for checkers was never really part of the HMS game plan to win a championship.

But just like the Yankees, who last won a World Series in 2009, the HMS juggernaut has fallen on tougher times. Gone are the days where they finished 1-2-3 in the Chase playoff back during the 2009 season. Johnson’s last title was in 2016; since then, no one has reached the Championship 4. It was JGR, not HMS, running circles around the competition last season with wins in over half the 36 races. They’re the ones who can breeze through the pack with superior equipment; it’s HMS who could use an extra dose of aggression to get ahead.

That’s never been in their makeup, leaving NASCAR’s Most Popular Driver frozen a step away from superstardom. The 24-year-old, now in his fifth full season, has just six career Cup victories and suffered from his first JGR mishap. He’s never again come that close to making a Championship 4. Popularity makes his success like a rearview mirror: achievements may be larger than they really are.

Since the Hamlin incident? Elliott’s rival became the hottest driver down the stretch last season, with Hamlin winning six times (Elliott’s career total). The No. 11 Toyota veteran was a sentimental favorite to win his first title in 2019 and reached the Championship 4 before falling short.

And Busch? The man Elliott calls “a class act?” Darlington’s contact was purely accidental, but he’s got a history of pushing drivers out of the way. Remember, this classy driver is the same one who intentionally wrecked a championship contender in another racing series (Ron Hornaday, Texas Motor Speedway, 2011). Busch has had run-ins with everyone from Joey Logano (2017) to current teammate Martin Truex Jr. (2014, among others).

Should Elliott take a lesson from the man sent him spinning at Darlington? Busch has mixed the best of both worlds: top-tier equipment with a chrome horn that moves, whether accidental or intentional. And you know what else Busch has on his resume? Two championships and over 200 career wins in NASCAR’s top three series, success that trumps Elliott’s any day. It’s a no-nonsense approach which, while some fans detest the comparison, has some similarities to Earnhardt.

Compare that to Elliott’s resume, yet to match the rich history of HMS. His biggest win so far is the April 2019 Talladega race, but he’s 0-for Daytona. Indianapolis. Darlington.

Now, he still has plenty of time to get there. Every champion went through these early, formative experiences to mold them into the driver they are today. Nice guys also don’t always finish last. Father Bill persevered through the Earnhardt era, winning the Winston Million in 1985 (three crown jewel races at Daytona, Charlotte and Talladega) along with the 1988 Cup championship.

Back in 2013, Elliott earned his first NASCAR win in any of the top three divisions by contact. He and Ty Dillon bumped on the final lap, with Elliott, then just 17, coming out on top in a Truck Series race out in Canada.

“We have only so many shots to win these things,” a teenaged Elliott said back then. “I really hate to win them like that, I really do. That’s not how I race and that’s never been how I’ve raced before. I had a shot. I was next to Ty and I knew he was going to try and chop me off. I tried to make up the difference.

Elliott has been a man of his word; we haven’t really since a move like that from him since. He’s a driver that’s gone about his business racing clean.

So how does he balance that philosophy when wins get replaced by wrecks? The punishments, in particular the first one, have pushed Elliott’s career back a notch. What would have happened if the second-year driver won that day? What if he could have propelled himself to a championship with that chance at Homestead-Miami Speedway?

We’ll never know. All Elliott has got instead are some apologies over what might have been.

“I got crashed on both occasions,” he said of the two JGR incidents Friday.” At the end of the day, it’s just unfortunate for me. And my team too, they deserve better.”

It’s up to Elliott how to do better from here.

Did You Notice? Quick hits before taking off.

Tom, did you notice that Chase Elliott has the same number of career Cup wins as media darling Kyle Larson? In fewer seasons and fewer starts? Larson was also the “beneficiary” of Rowdy’s bumper at Chicagoland a couple years ago. And unlike Busch’s mistake at Darlington, everything he did to Larson was purely intentional. And Larson accepted it meekly. Yet the media shills keep pushing him as the “next great thing.” And no doubt, you guys will be back at it next year proclaiming Larson the next great champion.

Did you notice that Tom Bowles interrupted his usual rant against Kyle Busch to bash Chase Elliott? I guess without Kyle Larson to be lauded as the “next great thing,” Bowles is at a loss for filler material. And I also assume Bowles doesn’t realize that Larson – in more seasons and more starts – has the same number of wins as Elliott. And further, that he forgot that Larson was also the “beneficiary” of Rowdy’s bumper at Chicagoland a couple years ago. And that Larson meekly walked away from that incident.

Did you notice that Bowles forgets a lot of stuff in padding his “commentary”?

Do you get a paycheck from the Yankees of Motorsports. Hell if he can buy a phony leukemia diagnosis to stay out of prison and a felony pardon from Clinton he can afford you too Bowles.

Wow. Some pent up anger here or what!

Nah. Karma took care of it.

I am not a fan of the Gibb Girls or the (Silver Spooned) Little Clyde. With that said, what the hell is Tom trying to say? Just asking…FOR ME!

The Gibb Girls always cause havoc with someone and then offer a weak ass apology. It truly seems to be a Bratz Girls crash crime spree! Willy Clyde is just overhyped as hell because of who his father is. And for the most popular driver BS. A marketing ploy, totally fake imo. But hey, bullshit sells to the sheep who care about that crap. Just like Danica. Now…settle down, I know little Willy Clyde has won! I don’t know one CLYDE fan but I do know the old folks still hang on to the glory days of YAWN…MILLION DOLLAR BILL. And I do have a wide berth of socialization with NASCAR fans, nobody that I talked to has him in their vocabulary. I just don’t buy the BS NASCAR is selling about HIS own popularity. If his father wasn’t who he is, if his father was not in the stock car business, HE would not be the purported “IT” guy. Sorry.

Watch the Gibb Girls, they are doing what they have done for years…look bug eyed and stand there and say “WHO ME, WHAT DID I DO”? LOL. Amazing shit right there, always!

Should be interesting when the Gibb Girls as history has shown start to do their opppsies (“my bad”) to their biggest competitors (READ PENSKE) when the season starts to wind down. THE GIRLS will just pick up where they left off last year. IMO.