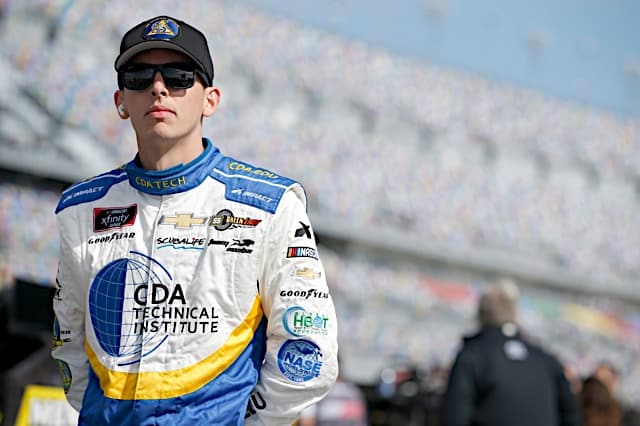 Prior to the 2020 NASCAR season kicking off at Daytona International Speedway in mid-February, Ray Black Jr. was scheduled to run the full Xfinity Series season for SS Green Light Racing. Less than one month later, the world was turned upside down by the COVID-19 pandemic.

This season, Black, 29, has been primarily funded by his family company, CDA (Commercial Diving Academy) Technical Institute. His father, Ray, founded the school in 1995.

CDA Technical Institute, located in Jacksonville, Fla., is the only accredited commercial diving school in the Southeast with on-campus housing and a full meal plan. In order to attend, students need to be at least 18 years old and only need to know how to swim. Upon enrolling in classes, students get a multitude of hours diving and are taught how to maritime weld in the ocean, among other criteria; working on bridges, pipelines, powerplants, etc.

When the coronavirus pandemic hit the United States, CDA shut its doors. Since mid-March, its had no students on campus with no income coming in. That’s a problem, especially when sponsoring a racecar.

NASCAR returned to the track this past week at Darlington Raceway, where Black finished 21st in Thursday’s (May 21) Xfinity race. But come Monday evening (May 25), the series’ next event, Garrett Smithley will be piloting the No. 07 Chevrolet, formerly driven by Black.

“We were shutdown for three months and that was huge for us,” Black recently told Frontstretch. “We had Darlington left on the list. After that, it was figuring out what was next.

“We talked to Bobby for a long time and we all kind of came to the conclusion where we had to focus on our school and getting back up and running, that way we can put the best budget out.

Black noted that his father is older in age and, after working his whole life needs help running the business. Recently, his sister, Emily, mother of two children, has been one of the focal points of being in charge.

Prior to getting into racing, Black worked for his father after turning 18 and graduating high school. He graduated from trade school before becoming a licensed scuba diver.

Black is hoping he can add value to the family business for the time being.

“The diving and the training, I’ve done most of it, so I feel like that’s going to be my main goal, to jump back into it,” Black added. “The whole business side of it isn’t my favorite part, but definitely want to get involved a little bit and see where it goes. … It’s definitely a tough time right now for people to have money or to go anywhere and travel and go to school out of state. There’s a lot of things we’ve got to figure out and work on.”

Black said he sat down with his father early into the pandemic, and the duo came to the conclusion that it would be best to step away from racing for the time being. Ultimately, the family would rather have the family business survive than spend a wad of cash on racing.

“We were just being realistic. At the end of the day, I was just like, ‘It’s not worth it,'” Black continued. “We could do it, but we don’t want to get in trouble to where we’re putting all of our money in racing if thing keeps going and going and going for six months. It just wasn’t a very smart move because you never know how things are going to pan out.

“Things are starting to get back to normal, but you never know what’s going to happen.”

“We just called him up and we were being honest with him,” Black said. “When you have a company that’s paying [to sponsor] you or something like that happening, you’re kind of cornered.”

Dotter, a longtime team owner, understood the situation Black was in.

“The biggest thing is, Ray is one of my drivers,” Dotter said. “His dad just said he thinks [the pandemic] hit him pretty hard and just didn’t see a recovery for the rest of this year.”

Because of that, Black is out as the full-time driver of the No. 07 car. However, he doesn’t plan on giving his racing career up because of an economic hiccup, though he’s the one getting the “brunt end of the deal.”

Black said: “I wouldn’t say we didn’t have enough funds, we definitely have the funds, but at the end of the day you want your sponsor to be in a comfortable spot. We didn’t have any income coming in, so straight up and down it doesn’t make any sense.

“We’ve got to do what we’ve got to do to survive and make sure that we’re here for the long run. … We’re just trying to think ahead and be smart and be prepared for it, that way if it does happen we’re not going to be standing there with our pants down.”

Through five races this season, Black was off to the best start of his career. He scored his first career top-10 finish at Daytona (eighth), posting an average finish of 18.6.

For Dotter, that makes this deal even more frustrating.

“We hate it,” he said. “He’s having his best year ever and we thought we stood a legitimate chance of making the [playoffs]. Just hate that we couldn’t go through it.”

Dotter confirmed he believes Black will be back in NASCAR, driving one of the team’s cars at some point. He doesn’t, however, see that happening for the remainder of 2020.

And though Black doesn’t know when he’ll return to the racetrack, he wants to stay “relevant.” In that case, he’s hoping to put enough funding together for even a couple races this year, whether it be in the Xfinity or Cup Series, where he has four career starts for Rick Ware Racing.

“I’m not worried about it,” he said. “It’s not like missing the final three-quarters of the year is going to affect me that much. … My main concern is we’ve got all the racing stuff figured out, now we’ve got to focus on the family, the family business and make sure we get comfortable enough to get back to where we can do what we want, like with racing and have a good budget.”

For now, Rick Ware has stuck a deal with Dotter to put drivers in the No. 07 car, beginning at Charlotte with Smithley. Expect Ware’s sons Cody Ware and Carson Ware, as well as other RWR drivers to see seat time at some point this season for SS Green Light.

Dotter and Ware have a longstanding friendship, helping each other along as both team owners navigate the hardships of the business side of motorsports.

“We’re working together for the rest of the year with the [No.] 07,” Dotter said of Ware. “Some of his drivers were wanting to run some Xfinity races, so they were talking to me. Rick’s kids want to run some Xfinity, so it was something we were able to put together without me having to be out there beating the bush every week trying to find drivers. Rick is helping me fill the seat.”

SS Green Light becomes the latest team that Ware is associated with. Earlier this month it was reported he had a purchase agreement in place to buy Premium Motorsports, becoming the control person of the No. 15 Cup charter. RWR also has ties to Spire Motorsports, Tommy Baldwin Racing and B.J. McLeod Motorsports at the Cup level.