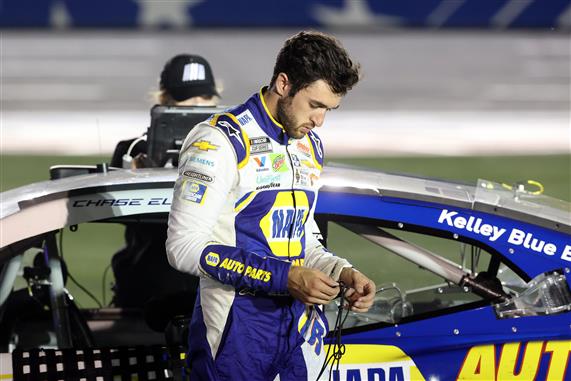 ONE: Chase Elliott and the Terrible, Horrible, No Good, Very Bad Week

Chase Elliott’s potential race-winning Sunday night at the Coca-Cola 600 was foiled by a few factors. Leading with less than three laps to go at Charlotte Motor Speedway, his Hendrick Motorsports teammate William Byron suffered a flat tire and spun. The ensuing caution sent some cars to pit road – and bizarrely, Elliott was one of them. Crew chief Alan Gustafson elected to play tire strategy for a two-lap sprint to the finish, possibly banking on another caution, but the race stayed green and Elliott raced up to only third place – the pit call drawing ire and confusion from many in the NASCAR world.

If the caution had happened earlier with the restart coming with three, four, five laps to go, the move might have paid off. The same goes for Kyle Busch and Martin Truex Jr., who, despite also running well, also decided to pit and managed fourth and sixth, respectively.

It was the second time in five days that unfortunate circumstances befell Elliott at the end of a race – the aforementioned pit call on Sunday, and the incident with Busch at Darlington on Wednesday night (more on that below).

Elliott will be hoping that something different happens this upcoming Wednesday night – namely putting his No. 9 in victory lane.

Last Wednesday night’s race, that feels like forever ago, ended with both clouds of rain and controversy. The rain ended the race with Denny Hamlin scoring his second win of the season and Joe Gibbs Racing teammate Busch finishing second. Busch, however, was also embroiled in an incident near the end of the race. Hamlin, Elliott, Busch and Kevin Harvick were leading the field with less than 25 laps left when Busch hooked Elliott’s car, sending the No. 9 crashing into the inside wall and out of a race he had a chance to win. The move wasn’t intentional, at least in the eyes of this writer, but the clash between NASCAR’s most popular driver and its most recent champion (and to some, resident hothead) led some to believe the contact was intentional.

Elliott held his middle finger aloft as the No. 18 went by under caution, and post-race interviews exhibited nothing but frustration from the parties involved – Busch insisting it was a mistake, that he tried to slot in line and misjudged the gap, and Gustafson not outright blaming Busch but clearly upset and exasperated. Additionally, the two also had a heated discussion once the rain set in and Busch exited his car.

However, Sunday’s race was a different scene altogether. On the heels of news over the previous days that Busch and Elliott had talked and were on good terms, the two raced each other several times throughout the night (and morning, for that matter) – at one point nearly bump-drafting down the front straightaway. No payback from Elliott and no needless aggression from Busch later, both drivers finished in the top 10.

Busch went up to Elliott on pit road after the race (albeit with neither driver wearing a mask) and reportedly said he felt bad for Elliott after the aforementioned pit call. Regardless of the conversation, Sunday showed how quickly issues can be resolved, as well as the respect, and professionalism, these drivers have for one another at NASCAR’s top level.

THREE: Jimmie Johnson Finished Second… Or Did He?

Racing statistics are fickle, however, and can change in the blink of an eye. Sunday didn’t help Johnson’s case.

The night appeared to be great for the No. 48 team. Johnson ran well, led a few laps, and finished second, even getting close to the leader and eventual winner Brad Keselowski during the race’s final laps.

However, NASCAR’s 2 a.m. announcement revealed that Johnson’s car failed post-race inspection and was disqualified, wiping away the runner-up finish and placing him dead last in the results.

Johnson plummeted from fifth to 15th in the standings in three races as a result – he sat fifth after the March 8 race at Phoenix Raceway, the last race before the coronavirus pandemic halted the season. Upon resumption of the 2020 schedule, Johnson wrecked out while leading at Darlington, tried to atone for the mistake with an eighth-place on Wednesday at the same track, and seemed to be on the upswing with the second-place effort at Charlotte. That, of course, was negated, meaning the No. 48 team has a lot of work left to do in 2020.

Sunday’s 600-mile event was a night of what-ifs and what-could-have-beens for several drivers with NASCAR’s premier teams.

Alex Bowman led 164 laps, the most of any driver, and seemed to be on track for a rock-solid night and maybe even a win. His No. 88 was fast early, winning the first two stages, but fell off a cliff as the race wore on. Bowman finished 19th, a dismal result after relative dominance early on, and even worse, he was the last car on the lead lap.

It was a night that became a nightmare for Bowman and his Hendrick Motorsports teammates – Bowman was the only Chevrolet in the HMS stable not to have a clear-cut issue. Elliott’s pit call set him back in a race it seemed he would win; William Byron’s flat tire killed a solid race for the No. 24. Meanwhile, Johnson’s aforementioned disqualification came after it seemed like his and Elliott’s top-five finishes had maybe salvaged HMS’ rough night.

Joe Gibbs Racing, meanwhile, didn’t do much better. Truex Jr. led a number of laps, 87 to be exact, and seemed to have the dominant car as he did in 2016 and 2019. That quickly went away, as despite having a lot of speed, MTJ faded late in the race. The No. 19 finished sixth, but he never quite got the speed back from early in the race.

Busch had a good night, finishing fourth, and Erik Jones ran relatively well, bringing the No. 20 home 11th. However, it was Hamlin, the 2020 season’s most recent winner, who had the worst night when some of his car’s ballast, the tungsten blocks in the cars used to weigh it down, tumbled out on the pace laps and sent the No. 11 to pit road before the green flag waved. Hamlin went seven laps down and never recovered, finishing 29th.

Christopher Bell scored his first-ever top-10 finish in the Cup Series on Sunday night, finishing ninth after a spectacular save early on. Pushed a bit too hard by Ryan Blaney, Bell’s No. 95 skidded sideways in turn 3 and slid at an angle for pretty much the entirety of the third and fourth turns. Bell, using his dirt-racing skills and experience, managed to save the car and keep it from going around. Despite all the smoke, no caution came, but Bell saved the car and was somehow able to keep from going a lap down, getting back into the top 10 by the time the checkered flag flew.

Crossing under the checkered flag behind Bell was Chris Buescher, who inherited a top-10 spot after Johnson was disqualified. That’s not to say Buescher had a bad night, because 11th is still great for the No. 17 team. It’s Buescher’s second of the year and first on a non-superspeedway.

Speaking of Blaney, who inadvertently created a highlight by pushing Bell into that slide, he finished third after an up-and-down night. Matt DiBenedetto led a few laps in the middle of the race but fell to 17th by race’s end, and rookie Cole Custer improved on a so-so night with a 12th-place effort. Front Row Motorsports also had a solid race, with both drivers finishing in the top 20 – John Hunter Nemechek and Michael McDowell crossed the line 16th and 18th, respectively.

Finally, Richard Childress Racing had their second-best overall race of the season. Tyler Reddick and Austin Dillon ran in or close to the top-10 much of the night, Reddick as high as fourth early in the race and eighth at the finish. Dillon, who won the 600 on fuel mileage in 2017, wasn’t as lucky, falling into the clutches of the field late and finishing 14th. It’s a positive note for Reddick, who’s finished in the top 20 all but two races this season and has two top-10 finishes since the season resumed at Darlington.

As a closing note, when will the rain stop? So far, inclement weather has affected some part of every race week or weekend except Phoenix, and more precipitation is scheduled for this week’s events at Charlotte. I’m keeping my fingers crossed that bluer skies (or, at the very least, just cloudy ones) are in store for the weeks ahead.

Chase has to start wondering of the JGR teams are out to get him, since most of his ‘very bad, unfortunate happenings seem to come off the front end of a JGR car.

WHO IS GOING TO BE THE FIRST WRITER TO ACTUALLY REPORT WHAT JIMMIE JOHNSON’S DISQUALIFICATION WAS FOR ??

Previously written and not noticed:

NASCAR Cup Series managing director Jay Fabian in a press conference stated that the rear alignment on the car was off when the car went through the optical scanning station. Fabian said, “There is a pre-race number and a post-race number that does give a pretty decent tolerance. It was outside of those post-race numbers.”

Read what is there.

Once again the media treating Chase with kids gloves. Interesting how nobody in the Nascar media is calling out Chase for his lack of professionalism giving the middle finger during the race and Nascar apparently isn’t fining him either (unless I missed it). In fact, one of you actually praised him for his professionalism because him and Kyle made nice? Give me a break!!!