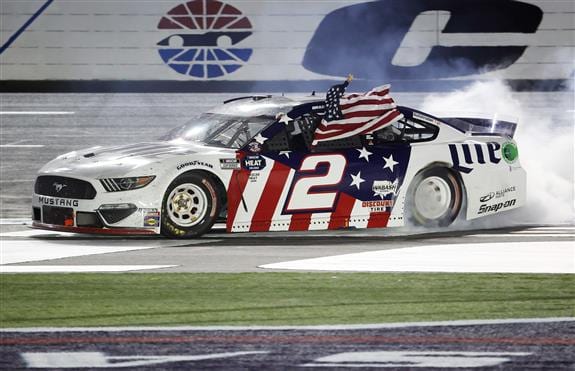 For the second time in less than a week, late-race heartbreak found its way to Chase Elliott in Sunday’s (May 24) Coca-Cola 600.

This time, it was Brad Keselowski getting the victor’s spoils.

Keselowski chose to stay out under the final caution at Charlotte Motor Speedway to take the lead when Elliott chose to pit for four tires. From there, he held off Jimmie Johnson to take his first Coca-Cola 600 victory. Johnson was later disqualified as his car failed post-race inspection.

“I feel like I’ve thrown this race away a handful of times and I felt like we were going to lose it today,” Keselowski said. “I know we’ve lost if the way Chase lost it, and today, we finally won it that way. I’m so happy for my team… I wish my wife and daughters were here.”

Elliott, who took the lead with 37 laps to go, appeared to have a win in one of NASCAR’s crown jewel events sewn up. But Hendrick Motorsports teammate William Byron blew his left rear tire and spun to the inside of the track with two laps to go, bringing out the caution flag.

Elliott’s crew chief Alan Gustafson opted to bring the No. 9 car down pit road for tires, dropping the No. 9 back to 10th on the restart. It was too much ground for Elliott to make up as Keselowski, who started from the rear of Sunday’s race due to unapproved adjustments on his car, took the win.

“Just trying to make the best decision you can. Those guys are going to do the opposite of whatever you do,” Elliott said of the strategy. “That’s just part of it. You make decisions and live with them.”

Johnson, who had a chance to win coming to the final restart, got a runner-up finish that would later be disallowed after starting the race from the same position. It was a painful way to continue his now 102-race winless streak.

“Second’s OK, very proud of the effort we are putting in,” Johnson said. “But second stinks, it’s tough to be this close to victory lane, but we’re knocking hard on the door and we’ll get there.”

Those quotes were before the rear end of Johnson’s car was found to be outside tolerances in the NASCAR rule book. The resulting last-place finish dropped him to 15th in the championship standings. The team, who has yet to announce an appeal, claimed a part broke to cause the problem.

“The allowance is built in for parts that move,” said NASCAR Cup Series Director Jay Fabian in announcing the penalty. “There’s an allowance for that. But if parts break, you know, the number is the number. There is no real parameter outside of that.”

Ryan Blaney and Kyle Busch moved up to third and fourth in the final running order. Points leader Kevin Harvick finished fifth, followed by Martin Truex Jr. and pole sitter Kurt Busch. Rookies Tyler Reddick and Christopher Bell were joined by Chris Buescher to round out the top 10. For Bell, it marks his first career top-10 finish in the NASCAR Cup Series.

Track position was king during the course of a race that, 50 laps in, was delayed for an hour and eight minutes due to rain. The race’s first 170 circuits were led by either Kurt Busch or Alex Bowman. Bowman won the first two stages and led a race-high 164 laps. The first on-track pass for the lead didn’t come until the 224th lap when Truex took the lead from Bowman. In total, Truex, Bowman and Kurt Busch led for 305 of the race’s 405 laps.

The late-race pit call wasn’t Elliott’s only adversity of the night. While most of the field pitted on Lap 278, Joey Logano, Elliott and Harvick stayed out. While Logano took the lead on the restart and held on to win stage three, Harvick and Elliott fell to the rear of the lead lap. Elliott rallied back, however, moving ahead for what ended up being a chance at a win that came up short. He also clawed back earlier from having to make an additional pit stop for a spring rubber adjustment.

The one driver that came out of Sunday night looking the worst was Denny Hamlin. His trouble began before the race even went green when the ballast fell out of his FedEx Toyota right after Hamlin left pit road to begin the pace laps.  NASCAR forced him to pit in order for the ballast to be replaced and properly secured. By the time the weight was properly affixed on Hamlin’s car, he was eight laps down to the leaders, a margin that he would never make up. The No. 11 Toyota would eventually finish seven laps down in 30th. Additional penalties will be forthcoming.

The Hamlin penalty will probably be four-race suspension to crew chief, car chief and engineer but. that would be announced Monday or Tuesday … his car wouldn't need to be inspected postrace to determine a penalty for the weight coming out of his car. https://t.co/TnTR4XwlgM

Hamlin’s ballast issue was one of only a handful of mechanical problems in the sport’s longest race. There wasn’t a single engine failure over 600 miles and only three cars failed to finish. Bubba Wallace (brakes) retired before the halfway point while Clint Bowyer and JJ Yeley wrecked out.

There will not be a lot of time for teams to recover from this one.  NASCAR Cup Series teams will be back at Charlotte Motor Speedway Wednesday night, May 27, for the ALSCO Uniforms 500.  Coverage is scheduled to start with NASCAR RaceHub at 7 p.m. ET with race coverage beginning at 8 p.m. on FOX Sports 1.

KEITH: GUSTAFSON GIVES IT AWAY