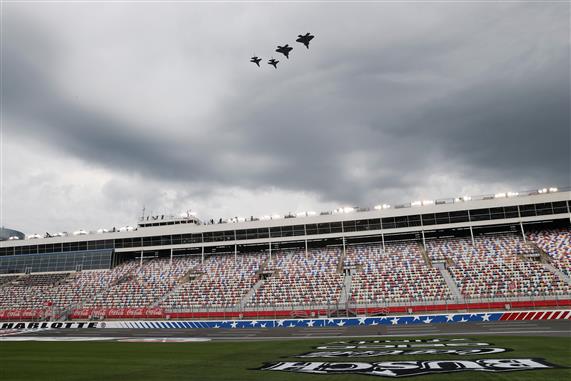 Charlotte Motor Speedway is normally a hive of activity on Memorial Day weekend, owing to its location just outside of Mecklenburg County (the track is just over the county line in Cabarrus County and reasonably close to a lot of shopping).  Sunday was not a normal day. In front of an audience of a couple of hundred people in trackside condos, NASCAR held it’s longest race of the year.

Going into the race, I was concerned that you might see another wreck-fest of a race, following Darlington’s pattern. That wasn’t really the case. Excluding the red flag for rain, the race was 22 minutes faster than last year’s four-hour, 50-minute epic that I happened to be in attendance for.

Ultimately, the race ended up being relatively boring at times. Unlike Darlington, there was little tire drop-off, which seems rather amazing for a track surface that’s 14 years old. The current car governances don’t help Charlotte, and the traction compound didn’t really add much. As a result, the race featured stretches where there wasn’t much in the way of activity, especially in the first half.

The first 300 miles saw no on-track passes for the lead (the changes occurred during pit-stop sequences). There was close racing upfront to an extent, but no one could really do anything until after halfway. When this scenario happens, FOX has to find as much decent racing as they can show viewers. If they don’t, you get the idea that nothing’s going on. I don’t think that FOX did a good enough job of that Sunday night.

The race saw a 68-minute rain delay 51 laps in and given the current restrictions, you would think that there would be very little rain delay coverage. Instead, viewers actually got 15 driver interviews, most of which were live on-camera interviews.  The exceptions were the Chase Elliott and Jimmie Johnson interviews, done via Skype. I’m happy with this coverage, but I really wish it didn’t rain. Then again, if you saw the radar I did Sunday prior to the start of the race, you should be happy the race ended just after midnight instead of 3 a.m.

The issues for Denny Hamlin before the race were covered decently. FOX diagnosed the issue and came up with replays of the ballast coming out to play. Now, this is a serious issue. Let’s be honest here. If there is a good time for a car to throw ballast, it’s at 35 mph at the very beginning of the pace laps. Regardless of the situation, it’s frightening dangerous. If it happens under green and someone hits it, it usually causes a pretty big crash. An example of this happened to Rusty Wallace in the 1998 Food City 500 at Bristol.

Wallace was already a lap down at the time of the crash due to engine issues. However, this crash put him out on the spot. Luckily, he was just frustrated afterward.

There’s also the possibility of the ballast breaking stuff on your car and ruining your day. That’s what happened to Rick Mast at Watkins Glen in 1994.

By now, you’re probably already aware of the stiff penalties that have been assessed to the No. 11 team. The broadcast team correctly predicted the penalties within five minutes of the ballast coming out to play. I’m not shocked at all.

As compared to Darlington, there was a lot less drone usage on the broadcast. Outside of when NASCAR held the moment of silence during the break after stage two, you didn’t really see it much.

Despite the race ending more than 90 minutes after the scheduled sign-off, there was still a decent amount of post-race coverage. Viewers got four post-race interviews, plus some analysis before FOX left Charlotte. Of course, this was long before Johnson got the big fat DQ. No one was thinking that was going to happen. I only found out after I got up Monday morning.

Once again, the Nexstar Media Group FOX affiliates WJZY (FOX 46 of Charlotte) and WGHP (FOX 8 of Greensboro) joined forces for a pre-race show, entitled Back to the Track, which was similar to Return to Racing from Darlington.

There were a number of features on the show, but two stood out. One saw a TV crew go over to Go FAS Racing in Mooresville to see how they’re handling the increased workload and decreased number of people working at the track. At Go FAS, it appears to be more or less be business as usual. A lot of the separation rules that NASCAR has put into effect really don’t work for this team since they just don’t have enough people on the payroll to differentiate. They have 17 employees. As team general manager Mason St. Hilaire stated in the feature, “we run lean and mean.” The current personnel limit at the track means that they could legitimately bring almost the entire team every week.

Another feature that aired on there was about what FOX’s pit reporters are facing with this current setup. Jamie Little described the current setup in the pits, where getting information is very difficult due to limited access. As a pit reporter, Little can no longer enter pit boxes to talk to crew chiefs during the races, something that was previously par for the course. I’ve previously stated in the column that texting is far from ideal because there’s no way that the crew chief would notice the incoming text due to the noise. Even if you have your phone on vibrate, you won’t hear or feel the vibration.

Honestly, I don’t see how you get any information from teams under the current setup at the track. Unless you’re doing it on the phone somewhere, you probably can’t do it at all due to the isolation rules. Add in the fact that even in these circumstances, everyone is still focused on confidentiality and intellectual property, and it’s pretty easy to see that you’ll never get anyone alone to talk about anything.

Luckily, Little appears to still have access to her monitor so that she can call pit stops. It is possible for Little (and other pit reporters) to still perform that part of their job without too many differences from normal. For Darlington, FOX only had one pit reporter on-site (Regan Smith for The Real Heroes 400 and Toyota 200, while Matt Yocum had the Toyota 500k), a setup that Little described as very difficult.

Things got a little better in that regard on Sunday as FOX had two pit reporters for the Coca-Cola 600. Little had one end of pit road, while Smith had the other end, plus the Infield Care Center. Charlotte actually has a decent setup, as the Infield Care Center is just beyond the north end of the pit lane. It’s a straight shot. I really felt lost at times last Sunday in Darlington in regards to the cars themselves because of the lack of information. That wasn’t the case at Charlotte.

Overall, I felt that the Coca-Cola 600 was light on action. It was nowhere near as enjoyable as either of the Cup races at Darlington. Last year’s race was more enjoyable as well, even though it took nearly five hours and was held in hot and humid weather. The on-track product made for a rather difficult event to cover successfully.  I was more informed Sunday night as compared to the 17th at Darlington, but I wasn’t quite as satisfied. A lot of that is not FOX’s fault, but simply the fault of the current rules and the traction compound that took far too long to come in. That said, there’s always something going on in a race. It’s on FOX to find the stories to make a race broadcast more interesting. The current situation makes it much harder to be able to do that.

That’s all for this weekend.  As of the posting of this article, the Xfinity Series ALSCO 300 will have already concluded. The Gander RV & Outdoors Truck Series season is scheduled to restart Tuesday night, while Cup teams will be back in action Wednesday night. Once that is done, Cup and Xfinity teams will travel to Bristol for the first short-track race of the year. TV Listings can be found in the TV tab.

Next week’s edition of Couch Potato Tuesday will cover the Cheddar’s 300 and Food City 500 from Bristol Motor Speedway here on Frontstretch. For the three remaining races in Charlotte this year, they will be covered in the Frontstretch Newsletter.  Wednesday’s Newsletter will cover the ALSCO 300 and the North Carolina Education Lottery 200. Thursday’s edition will cover FOX Sports 1’s broadcast of the ALSCO Uniforms 500k.

I think it’s time to go old school and the winner of the “event” goes straight to Victory Lane and cut out the crap at the finish line.

Agree with DoninAjax for once. Also add some Cup Trophy girls to give kisses to the winners, masks optional.