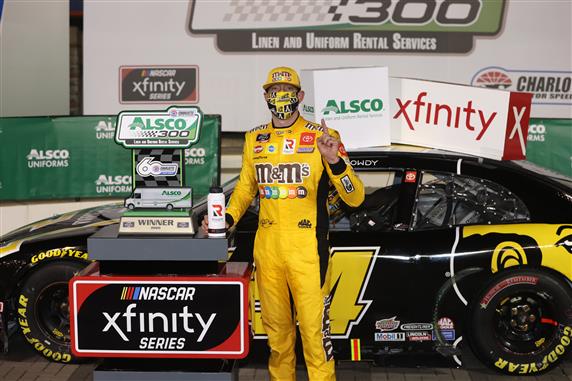 Kyle Busch won the ALSCO 300 Monday night (May 25), putting him three wins away from 100 triumphs in the Xfinity Series.

The win did not come without challenges though. Ross Chastain in his No. 10 car started on the pole and led the opening 31 laps. Busch started 18th and worked his way up through the field. Chastain battled back and forth with Busch for the lead until the second stage was complete. At the start of the final stage, Busch pulled away and then dominated – until he was caught speeding on pit road. The same penalty befell Brandon Jones and Chase Briscoe, who were also busted for speeding on pit road.

Everything changed on lap 155 in the middle of the pit road cycle. The No. 66 of Timmy Hill blew a motor and spilled oil all over Turns 3 and 4, causing Chastain and Briscoe to both hit the wall. Austin Cindric, who had already pitted and gotten back onto the lead lap before the yellow, became the race leader after the restart. The cars that had stopped, but were still a lap down took the wavearound. After the pit stops, a quick caution was caused by Briscoe hitting the wall again. Strategy over pitting came into play as Busch led his No. 54 car down pit road with other cars in tow.

Late cautions became the story as five cautions shook up the last 30 laps of the race. Myatt Synder, Brandon Jones, and Noah Gragson were all taken out while running in the top 10.

On the final restart, Cindric was able to get the jump on Busch to take the lead. Busch would not be denied, going side-by-side with Cindric entering Turn 3 on the final lap to get the advantage back. Daniel Hemric got by for second as well, forcing Cindric to settle for third. Chastain battled from being a lap down to a fourth-place finish with Justin Allgaier rounding out the top five.

Busch swept all three stages at Charlotte Motor Speedway and Jacob Canter, Kyle Busch’s crew chief, earned his first career win. The No. 54 team was in the same position as he was in Darlington with Busch coming back from a penalty. Canter said that he let Kyle Busch be Kyle Busch when trying to get him back to the lead and it worked out in the end.

Busch continues to add to his Xfinity resumé as this win marks eight straight seasons that he has won at least one Xfinity race. This is also the ninth win for Busch at Charlotte Motor Speedway.

The Xfinity Series will next be on the high banks at Bristol Motor Speedway on May 30th on Fox Sports 1 at 3:30 p.m. ET.

When Baby Busch gets to 201 CUP wins, he will have something to be proud of. Til then, not so much.