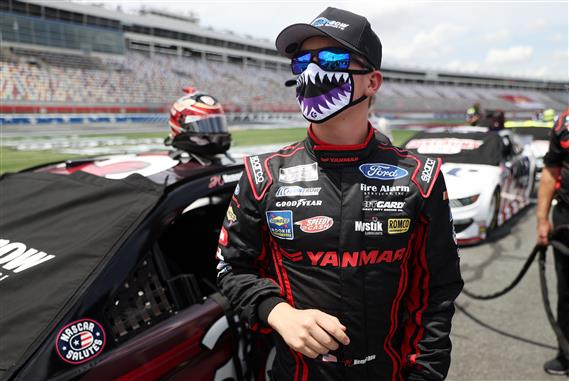 John Hunter Nemechek stole the show in the first NASCAR Cup Series race at Darlington last week. But that was just the beginning for his team at the top of the underdog class. Front Row Motorsports has really taken over the group, with Michael McDowell being the highest such finisher in race No. 2 at Darlington, followed by Nemechek regaining the podium spot this past Sunday at Charlotte Motor Speedway.

McDowell, the most tenured member of FRM, held his own at Darlington on Wednesday evening, finishing 17th. McDowell started the season fairly well and has picked up where he left off, as the veteran driver has finished 23rd or better in all but one race thus far in 2020. He may have been outdone by his rookie teammate in the first outing at the 1.366-mile oval, but McDowell actually wound up with the better average finish between the two races.

In Sunday’s Coca-Cola 600 at Charlotte, youth was served once again, as JHN bested his fellow Front Row wheelman by two spots in the final rundown, coming in 16th while McDowell was 18th. The two have been the highest finishing underdog in five of the eight races thus far, demonstrating that FRM might be the next team to lose its underdog status. I’m guessing that they’d be perfectly fine with that.

After the race, McDowell spoke about his team’s performance. “We got a bit behind but we fought all day long,” he said. “[Crew chief] Drew [Blickensderfer] and my guys on our No. 34 Love’s Travel Stops Ford Mustang team did a good job of getting us back on the lead lap and fighting for a top 20. It got wild and crazy on that final restart and I’m just thankful we made it through and got a solid finish. Both cars at Front Row Motorsports finished in the top 20, so it was another good race for our team and now we’ll get ready for Wednesday night. ”

Once again, the No. 13 Germain Racing team with Ty Dillon was steady and steered clear of trouble. Dillon wound up 19th in both races at Darlington and 25th at Charlotte. Dillon’s GEICO cars continue to hold their own among the top half of the field and this team seems to be on the cusp of becoming an occasional contender.

In the Xfinity Series race at Darlington, Ryan Sieg was the man to beat in the underdog category, as he often is. Sieg racked up a seventh-place finish, the lone such competitor to wind up in the top 10. Jeremy Clements and Brandon Brown finished 12th and 13th respectively, while BJ McLeod brought his car home in the 15th position. The Xfinity race at Charlotte will be featured in next week’s column.

The NASCAR Gander Outdoors Truck Series will take to the track Tuesday night for that series’ first race back since the Coronavirus outbreak.

For the second week in a row, the Cup teams will tackle a track twice in the span of four days. This time around, there’s another 500 kilometers on tap from Charlotte (just in case the 600 plus on Sunday night wasn’t enough for you). It’s easy to look at the FRM teammates or Dillon, but I’d keep an eye on Corey Lajoie. Lajoie started and finished in 24th place in the Coca Cola 600 and could potentially do better on the second go-around.

As for the Truck Series, Brennan Poole is a solid darkhorse candidate. Poole was the runner-up last year in the Steven Lane-owned No. 30 and could be in the mix again. Also, Cory Roper has shown a surprising ability to keep pace on similar racetracks, so he is another one who could turn a few heads when the checkered flag waves.

Finished 34th in the #CocaCola600! This can be a grueling race so hats off to @MBMMotorsports on getting us to the checkered flag. Had to recover from a couple unscheduled green flag pit stops with some loose wheels but very uneventful night other than that. XFINITY race tonight! pic.twitter.com/DpSbndDUmU

Well this weather puts a damper on things. But my dogs back home are staying enthusiastic!??? #z00m #CocaCola600 #starcomracing pic.twitter.com/cXo6uUhczY

Checking out that #38 Ford! pic.twitter.com/nilztVtJlt

And added this fun find in the stacks: Orlando Sentinel, 1/8/1998 headline, "The real Boy Wonder" as a 14-year-old McLeod declares his stock-car racing aims: "My goal is to be the best. Just like Jeff Gordon, all the way through. But better." pic.twitter.com/qqONaAni7K