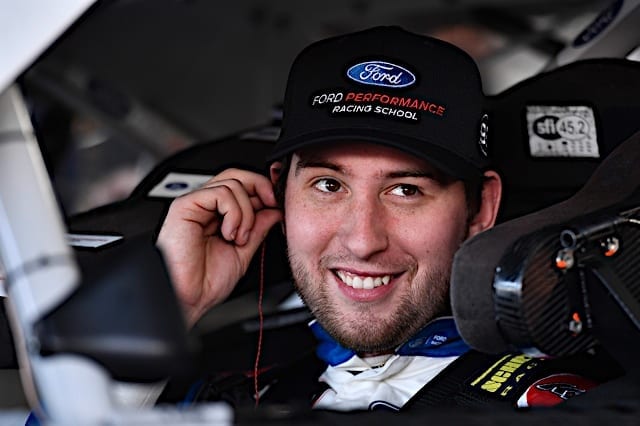 Chase Briscoe provided what will certainly be a highlight of the 2020 NASCAR season on Thursday evening (May 21).  Briscoe won the weather-delayed NASCAR Xfinity Series event at Darlington Raceway, beating Kyle Busch to the finish line after a last-lap battle that evoked memories of the Ricky Craven / Kurt Busch finish in 2003.  It was a hard-fought, emotional victory for the 25-year-old racer, who captured his second victory of the year.

Prior to the start of the 2020 season, Briscoe declared that he would need to win about eight Xfinity races this year to secure his future and potentially move up to the Cup Series.  Having won twice in the first five events of what was originally supposed to be a 33-race season, he’s well on his way to that goal.

Not that Briscoe’s early success or high expectations are a surprise.  Last year, the Indiana-born driver was the NXS Rookie of the Year and finished fifth in points.  Most of the drivers who finished ahead of him graduated to the Cup Series.  That left a clear opportunity for Briscoe to come back in 2020 and potentially win the Xfinity Series championship.

Yet Briscoe’s short-term future was up in the air when the 2019 season concluded.  Ford Performance has been Briscoe’s primary backer for the balance of his NASCAR career. However, it appeared that he might need additional sponsorship to keep his seat in the No. 98, a car fielded jointly by Stewart-Haas Racing and Biagi-DenBeste Racing.  SHR confirmed during the offseason that Briscoe would return, though Ford remains the No. 98’s biggest sponsor.

With finances coming into play, Briscoe’s goal of eight wins might seem lofty. But he is correct to suggest it may take such a high number to attract a sponsor or secure additional funding from Ford, especially in such tough economic times.

Suppose Briscoe does win around eight races and the Xfinity championship this year.  Would that guarantee him a ride in the Cup Series with SHR?  Briscoe is cut from the same mold as Tony Stewart – an Indiana dirt track racer with a passion for sprint car competition.  And, even though Briscoe does not have a major sponsor, SHR co-owner Gene Haas has demonstrated a willingness to fund teams out of pocket.  Surely, it would just be a matter of Briscoe signing on the dotted line, right?  Not necessarily.

Stewart-Haas Racing faced a similar problem one year ago when Cole Custer was lighting up the Xfinity Series.  Speculation abounded that the team would release veteran Clint Bowyer, who was in a contract year, and have Custer take his place.  However, Bowyer’s sponsor Rush Truck Centers interceded on his behalf, reaffirming that they wanted him to remain the driver of the No. 14.  In the end, SHR released Daniel Suarez after just one season with the team and had Custer take his spot. Bowyer and SHR extended their contract for one more season after the veteran made the playoffs.

Now, Bowyer once again finds himself in a contract season, as does SHR teammate Aric Almirola.  If Briscoe gets his big win season in the Xfinity Series, it is possible that he could replace either driver. But unless Briscoe gets a sponsor of his own, it would take some convincing to get Bowyer’s or Almirola’s backers on board with a driver change.  Rush could easily vouch for Bowyer again, and Smithfield has been Almirola’s primary sponsor since 2012, following him to SHR from Richard Petty Motorsports.  Meanwhile, Custer is racing the self-sponsored Haas car, and Kevin Harvick will not be leaving SHR anytime soon.

Adding Briscoe would also require SHR and its sponsors to accept another project driver while Custer gets up to speed.  That would be a difficult sell.  The days of Cup Series rookies jumping into good equipment and immediately winning races are over for the foreseeable future.  Even in our hypothetical scenario, an excellent Xfinity season, Briscoe would no doubt face a steep learning curve in the Cup Series. Need proof? Take a look at the struggle Custer is facing to start (22nd in the current standings).  Barring a major financial commitment from a current or new sponsor, Briscoe’s path forward with SHR will not be simple.

A different scenario that Briscoe might face is finding a ride with another Ford team if there is no room at SHR.  Fellow Xfinity racer Austin Cindric looks to be the next driver in line for a spot at Team Penske.  If Cindric were to move to the Cup Series in 2021, it’s possible that Ford could pull a few strings to have Briscoe replace him in the No. 22.  That said, the biggest piece of the puzzle regarding Penske’s 2021 lineup is Brad Keselowski.  If Keselowski re-signs with Penske, there would be no changes among the team’s Cup drivers short of adding a fourth car for Cindric.

But if Keselowski and Penske were to part ways, the No. 2 car would be open for Briscoe or more likely Cindric.  Throw Matt DiBenedetto into the mix as well, currently driving for the Penske-affiliated Wood Brothers Racing on a one-year contract.  If Keselowski stays put, Cindric or Briscoe could take that car if DiBenedetto gets released.  Of course, replacing DiBenedetto would also require convincing sponsor Menards to go for a new driver, too. Remember, Paul Menard recommended DiBenedetto as his own replacement less than a year ago.  So as much as Ford might want to keep Briscoe in its fold, there is no clear path forward for him at Penske, either.

With all that said, the biggest linchpin of the 2020 NASCAR Silly Season is what happens with Hendrick Motorsports’ No. 48 car.  With Jimmie Johnson reaffirming this season will be his last racing full-time in the Cup Series, is there any chance Briscoe could replace him?  At this point, he is probably a longshot for the No. 48.  His consideration for that car may depend entirely on whether or not Hendrick wants a rookie to fill the seat.  HMS will likely have its pick of available drivers, though Kyle Larson being out of play for now definitely complicates the team’s decision.  Choosing Briscoe would be a surprise unless he really distinguishes himself in the Xfinity Series.

If Briscoe’s goal is strictly to race somewhere in NASCAR next year, he will probably find a seat.  But competing full-time in a competitive Cup Series car would be another matter altogether.  It’s not that Briscoe faces a lack of options for next year; it’s that the good ones will require more funding than what he has available now.

For the time being, all that Briscoe can really do is keep chipping away at that eight-win goal.  Like the rest of us, he will be waiting for the next NASCAR free agency shoe to drop.