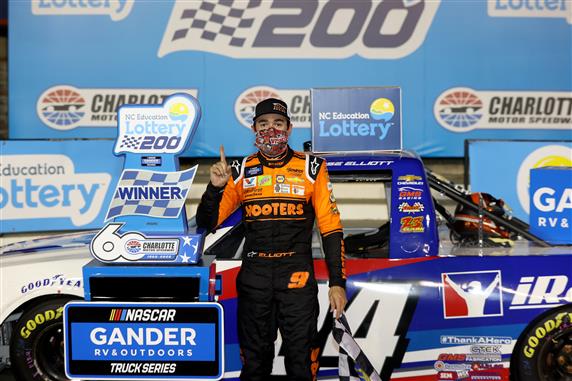 The North Carolina Education 200 was the division’s return to action. The last time the series held an event was on Feb. 21, 2020, 95 days prior due to the COVID-19 pandemic.

After its inception in the spring, Kevin Harvick‘s bounty ($50,000 to any Cup driver able to beat Busch in a Truck race) was scheduled to begin at Atlanta Motor Speedway — the race scheduled for March 14. That weekend was the first of six races postponed because of the coronavirus.

Elliott started 26th in a packed field of 40 trucks. Front row starters Ben Rhodes and Tyler Ankrum led the field to green, but a shaky start from Ankrum’s No. 26 allowed the inside line to jump out front. Austin Hill blew by the No. 99 to lead lap 1.

Busch’s self-owned No. 51 rocketed through the field from his 16th starting spot, moving up to eighth by the time four circuits had been completed and sixth by the lap 15 competition caution.

Hill led when the green flag dropped, but Ross Chastain, piloting Niece Motorsports’ No. 42, chased down the Hattori Racing Enterprises driver and won the first stage of the race.

Crafton, running in the top five at stage’s end, took the lead from Kyle Busch Motorsports driver Raphaël Lessard, but lost the top spot to Elliott on lap 45. Elliott went on to win the second stage.

Stewart Friesen and Brennan Poole were racing for position on lap 81 when, contact with Jesse Iwuji‘s lapped truck sent all three into the wall, also involving Ankrum’s No. 26 in the aftermath.

Poole’s damaged truck was caught up in another wreck two laps after the restart, with Decker’s spin ahead of him collecting the No. 30.

Two more cautions flew in quick succession, the first for Garrett Smithley‘s spin into the inside wall on the backstretch and then for Todd Gilliland slamming the wall. Gilliland finished 37th.

As the field came back to the green flag, Crafton — who had been running in the top 10 most of the night — suffered a trackbar mount malfunction, the piece breaking off of the Ford’s chassis. The problem resulted in the truck’s rear end sliding around, rendering it undrivable.

After making a late pit stop, Busch passed 10 trucks in two laps before the field slowed again for the Gilliland caution. All of the final 27 laps were contested under green flag conditions, with Busch fighting his way through traffic as Elliott secured the lead.

Busch traded spots with Zane Smith and Johnny Sauter as he fought towards the front, eventually taking second for good and setting his sights on Elliott. He got within three-tenths of a second from the leader, using up his tires and fading back. Busch closed up a little on the final lap, but could only watch as Elliott took the checkered flag first.

Smith, Brett Moffitt and Sheldon Creed rounded out the top five. Moffitt finished fourth in his first race since breaking both legs in March, injuries sustained in a motocross bike accident. GMS Racing had four of their five trucks finish in the top five, Ankrum the only outlier in 13th.

For the victory, Elliott won $50,000 from Harvick and the same amount from Camping World CEO Marcus Lemonis. The combined total will be donated to a COVID-19 relief charity of Elliott’s choice.

“It was a lot of fun,” Elliott said in his post-race interview. “[The truck] was really good from the get-go. … [My crew] did a nice job and made it easy on me to be able to move forward and try to get acclimated, it’d been a long time. Doesn’t make up for Sunday, but it was still a really good night and glad to win and do some good for the relief efforts for this virus.

The Truck Series will return on Saturday, June 6 at Atlanta Motor Speedway, the 200-mile event is slated to start shortly after 1 p.m. ET.

congrats to chase. boo to crybaby busch who finished runner up. his post-race comments i saw online….it’s your team, so your butt is the one to kick. if you don’t like losing, then maybe you shouldn’t race.

now i have to remember about race tonight.

At least we won’t have to hear about the bounty anymore.

Bill B – awww come on someone will come up with something to keep interest.

Nice run by Chase, he made some good moves at the end. Watching the race unfold I think lap traffic was the key at the end there and not tires tho.

According to Charlotteobserver something apparently broke on the 51 truck causing a major vibration all night so maybe that was the reason for the 2 long pit stops early in the race? Also according to the booth there were a few toyotas on pit road getting their front ends worked on to get the splitters off the track…thats a major miss by their camp imo.

Big congrats to GMS tho, they showed up. Those Chevy’s were ready to rock from the drop of the green flag.