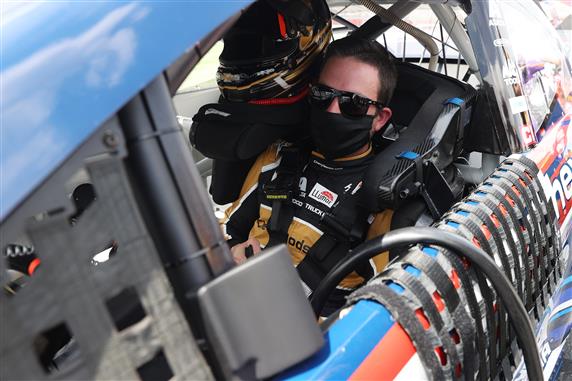 The fourth NASCAR Cup Series race in 11 days is scheduled to take place on Wednesday (May 27), when round eight of the 2020 season commences at Charlotte Motor Speedway.

The second oval race at Charlotte this week, Wednesday’s race will be significantly shorter than the 600-miler that was run on Sunday (May 24). In fact, the 500-kilometer race will be just eight more laps than Monday’s (May 25) NASCAR Xfinity Series race was scheduled for on the same track.

Similar to last week’s mid-week race, the starting lineup has already been determined based off the finishing order of the Coca-Cola 600. The top 20 have been inverted, while the bottom 20 will start where they finished the 600. For example, Brad Keselowski won on Sunday and will start the race in 20th on Wednesday, while Ryan Preece finished 22nd and will begin the next race in 22nd.

However, pit stall selections are still based off of Sunday’s finishing position, not Wednesday’s starting lineup. So Keselowski’s No. 2 Team Penske Ford has the first pick of the litter.

One final note about the starting lineup: Jimmie Johnson’s disqualification following the 600 scored him in 40th, which means that he will start last on Wednesday. I didn’t select Johnson to my team due to just not knowing if the No. 48 team is going to be able to recover from that in a few days, but Johnson should be a very attractive driver for any lineup due to a high position differential he’ll probably have if he can stay out of trouble.

FanDuel has put more emphasis on finishing position than other DFS sites. For this reason, it allows you to look at the entire field instead of just drivers that are known for leading laps and big movers.

Also, with only 0.1 points awarded for each lap led by a driver, the need for a dominator is less important when building a winning lineup. The 208-lap race will have a total of 20.8 points up for grabs in this category. Take note when building your roster and focus on mid-pack competitors who can climb up toward the front on race day.

Here’s my team for Wednesday night’s race. Note: the following Charlotte-specific statistics cited are on the oval layout, not on the ROVAL layout used in the track’s fall events the past couple of years.

I had Elliott on my fantasy team last week because I thought he was due. Well, Elliott is getting pretty darn close to end-of-the-semester levels of lateness.

Getting away from that pit call there by Crew Chief Alan Gustafson, Elliott did finish second when all was said and done. It was his second runner-up finish at Charlotte in his career, and he now goes into this race pissed with a great pit stall and a solid starting spot, 19th, from a fantasy perspective.

After finishing 19th, Bowman will be starting on the front row with teammate William Byron. Bowman was strong on Sunday night, leading more laps than any other driver in the race. However, Bowman was held up in a big way on the final restart and fell prey to the drivers who pitted with Elliott during the final caution, leading him to a mid-pack finish. With this pick, I’m banking on Bowman being able to drive off on the start, use the clean air to lead a lot of laps and maybe even get a win due to how short the race is.

Jones isn’t particularly impressive at Charlotte. But since NASCAR came back last weekend, Jones has been a very solid driver and a great pick at this price point. What has been most impressive in the past week and a half concerning this driver: he had a substitute crew chief last Wednesday due to a rules violation last Sunday, yet still led some laps before ending the night in fifth.

Bowyer is here for a very simple reason: he’s going to make a lot of ground up starting all the way back in 39th. At some point, there has to start to be a bit of pressure for Bowyer to start performing. Chase Briscoe is quickly becoming a human-highlight reel in the NASCAR Xfinity Series, and Bowyer is the most vulnerable driver right now at Stewart-Haas Racing. Just one top-five finish in the first eight races should make that seat very hot for Bowyer.

Like with Bowyer, Wallace is here because he’s starting in 38th and should be able to make some ground up. Wallace isn’t as sure of a thing as Bowyer is as far as improving on his starting position. But one thing a lot of people in the Richard Petty Motorsports camp probably liked was how well their engine/chassis supplier Richard Childress Racing performed for much of the 600.