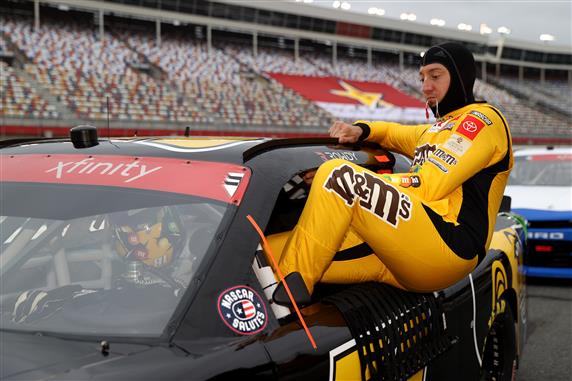 It was the Kyle Busch show once again in the Xfinity Series. Leading a race-high 94 laps, Busch, in his No. 54 Toyota Supra, won the first two stages with ease, bounced back from a speeding penalty in the final stage, and made a bold pass on Austin Cindric on the final lap to claim the victory in the Alsco 300 at Charlotte Motor Speedway.

CHECKERED FLAG: @KyleBusch takes the ? with a pass in the final turn of the #Alsco300 at @CLTMotorSpdwy!

Busch’s career in Xfinity began at the same racetrack as an 18-year-old in 2003. He led 33 laps and finished an impressive second that day. 97 wins and one series championship later, this kind of performance allowed Busch to once again solidify his G.O.A.T. status in NASCAR’s second-tier series.

While Busch made his pass on Cindric in turns 3 and 4, Daniel Hemric capitalized on Cindric’s slowing momentum, passing him to take second place across the line.

Busch somehow always finds a way to make an appearance at the front in time for a thrilling finish. Last Thursday at Darlington Raceway, Busch was on the losing end of the battle for the win against Chase Briscoe. But Monday night, it worked out the other way around for him. He increased his all-time series wins record to 97, as well as the wins total for him at Charlotte Motor Speedway across the three NASCAR national touring series to 18.

Hemric is patiently climbing back up the mountain towards NASCAR greatness in 2020. Although he may feel the stinging effects of earning the sixth runner-up finish of his Xfinity career, results like this are what will keep Hemric’s name floating around the garage area. And this result comes with a bit more significance, as Charlotte is essentially Hemric’s home track, being a native of nearby Kannapolis, N.C.

Although the upper groove of Charlotte Motor Speedway was coated with a grip-increasing PJ1 solution, pit road proved to be anything but grippy and stable. Many penalties were given to several drivers on a round of green-flag pit stops during the final stage. Hemric was penalized for an uncontrolled tire violation, while drivers such as Brandon Jones, Noah Gragson, Briscoe and eventual race winner Busch were given speeding penalties for failing to slow down in time before pit entry. Goes to show that making a green-flag pit stop at this racetrack is no easy task.

By far the ugliest sight of all was the frequent appearance of the yellow flag, which flew 11 times Monday night. Aside from the two stage breaks, the yellow flag remained mostly in the flagstand for the first three quarters of the race. Then after Timmy Hill’s blown engine on lap 155, the field was struck with yellow fever. Six additional cautions occurred in the final 45 laps due to accidents, with the most violent one coming on lap 198, involving five cars.

What seemed to be an easy-going, placid night at Charlotte turned out to be an expensive one for many teams whose cars fell victim to crashes.

Not even a month ago, Brett Moffitt was still recuperating from leg injuries suffered in a motocross accident in early March. Tonight, he was able to use pit strategy and avoided wrecks to bring his No. 02 Chevrolet Camaro to a sixth-place finish, a career-best finish for both he and the newly-formed Our Motorsports team. Brandon Brown also recorded his first ever top-10 finish on a non-superspeedway track, with an eighth-place finish in his No. 68 Brandonbilt Motorsports Chevrolet Camaro.

Honorable mention in this category goes to Tommy Joe Martins, who came close to nabbing his first ever top-10 finish, lining up 11th for the second-to-last restart. Instead, his No. 44 Chevrolet Camaro took a pounding into the inside wall on the backstretch in a multi-car wreck on lap 198. Fortunately he was not injured, but his underdog run was spoiled.

“Those guys put up a whale of a fight toinght on restarts. I was really surprised by that, I guess I’m not very good at it anymore… Pretty cool to score a win here at Charlotte as always.” – Kyle Busch, race winner

“To almost beat the best in the business on old tires, ah!… I never lifted into [turn] 3, until I knew I was done.” – Austin Cindric

Lowest I’ve ever been. 2 laps away from my first ever NASCAR top 10 with a guaranteed top12 & we wind up 5 laps down in 24th, totaling our best car, probably a 75k wreck. Feels like it’s just never gonna happen for me.

Thanks for all the texts & messages.

The Xfinity Series will head over to east Tennessee for the running of the Cheddar’s 300 at Bristol Motor Speedway on Saturday, May 30, the second short-track race of the 2020 season. Green flag is set for 3:30 p.m. ET, and the event will be televised on FOX Sports 1.

I started to watch the race, but once Kyle started dominating I found something more entertaining and less predictable to watch. Yawn.

Yay for another fair-weather Nascar fan. Don’t you think if you stuck with it and a few hundred thousand more people with attention span issues that sponsors world sit up, take notice and rejoin the sport, giving money to underfunded race teams and making the level of competition higher. Instead, it sounds all me me me cellphone instant gratification. Go watch bull fighting and stay away from my sport.

Bill B
Reply to  Josh

Just wondering… are you a Kyle fan by any chance?

glad i switched over when i did. i’m sorry he should not be running in lower series. not like he’s a cup rookie.

Same here. I remembered the race was on and figured I’d check it out. Busch in the lead. Nothing to see here. Simpsons reruns it is.

Shame you guys missed a good race. I only tuned in around when then last stage started cause I forgot it was on. Had a lot of hard racing throughout the field, crazy events unfold, watched Chase drive through the field thinking this is not something you would see done in a cup car only to get caught up in oil on the track. Lots of pit road speeding penalties during the only green flag stops of the race. caution in the middle of green flag stops. Lot more entertaining of a race than Sunday nights race where oh yea clean air was the dominant car yet again.

I tuned in after about a half hour and decided I didn’t want to watch another Baby Busch Benefit. Puts a whole new meaning on BBB. It was like taking candy out of the mouth of a baby.

Was actually a hard race. The competitors thought so. And how do you become a better driver without huge talent to race against? Used to be 10, 11 cup drivers in the races. I think all the cellphone army is running them off. Our sport needs support and you guys change the channel. Bet half of you are Sr fans and I guarantee he’d be disappointed.

What a surprise. One of the best cup drivers in nascar history, a two time cup champion with the very best equipment and pit crew a cup one at that ,wins his 97 th victory in a minor league division.
Forget the ego gratification this affords think of the hundreds of thousands of dollars he and Joe Gibbs have deprived lesser equipped and less experienced and less well funded non factory teams of not to mention the coveted trophies. Nascar can no longer excuse this invasion by saying the lower divisions need the cup guys to attract crowds. The way these Xfinity kids race they need no cup invaders stinking up the show to put on a very exciting event.

Just realized, by NASCAR allowing Kyle to run the lower series, they have been practicing social distancing for years! Attracting 3000 fans and putting them in stands with 75,000 seats, there is lots of room between everyone. Good job Kyle!

I’ve got to say that Kyle’s last lap pass was not entirely kosher. IMO, that was not a side draft, but an intentional move to try and take Cendric out. Had Cendric not moved a half lane to the left, Busch would have plowed into him. I’m not sure this falls into the bump-n-run or rubb’in is racing.

Maybe Baby Busch made a “mistake” again in timing the move. If there had been contact it would have been “accidental”… again.

Thats exactly how you side draft….watch Chase Elliot, Brad K., Ryan Blaney, Joey L., hell anyone else in the field today and you will see moves like this back in the middle of the pack. That move had been going on for years and if he didn’t move up half a lane Busch just stays on his quarter panel. My goodness the difference of NASCAR fans opinions based on a name is as hypocritical as NASCAR’s rule book.