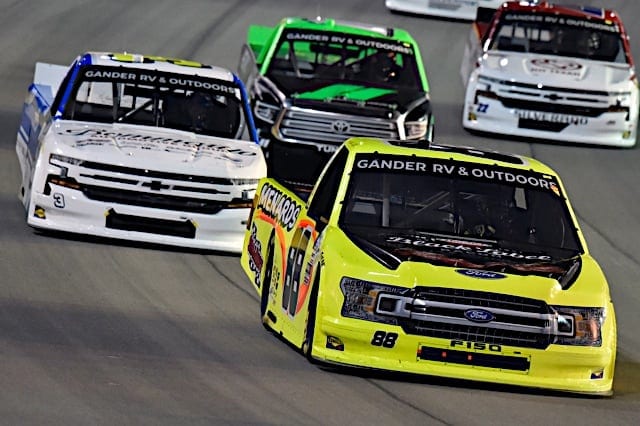 The NASCAR Gander RV & Outdoors Truck Series returned to action in its first race back since the beginning of the COVID-19 pandemic. Due to no practice or qualifying sessions for the races, NASCAR temporarily expanded the Truck Series field to 40 drivers. In actuality, 47 drivers attempted to compete in the race at Charlotte Motor Speedway, but NASCAR capped the field at 40.

With so many drivers entered in the first race back for the Truck Series, the question for this 2-Headed Monster is should the Truck Series field be permanently expanded to 36? Mark Kristl and Clayton Caldwell debate.

With changes by NASCAR, more teams will compete in races

The Truck Series field was capped at a maximum of 36 drivers until the 2015 season. NASCAR then reduced the starting field from 36 to 32. But it is time to go back to 36.

Why did 47 drivers attempt to compete in the 2020 North Carolina Education Lottery 200? First, the bounty on Kyle Busch attracted three full-time NASCAR Cup Series drivers, and a fourth, Erik Jones, did not make the starting field.

Second, the race was at Charlotte Motor Speedway, the epicenter of NASCAR. Teams did not have to travel far, so expenditures, especially on a one-day show without practice or qualifying, were low.

Unfortunately, the addition of eight more drivers meant the purses were lowered. Although NASCAR does not release those figures to either the public or the media, eight more entries earned a paycheck. Increased purses was one reason why NASCAR reduced the field size. It also attempted to court companies to become race entitlement sponsors at a cheaper cost.

Yes, Truck Series teams need to be profitable or at minimum break even. But the expansion of the field should not guarantee teams make less money.

NASCAR needs to continue to find ways to lower costs for Truck Series teams. If NASCAR can lower costs, then ideally more teams will compete.

One simple way to do this would be to change the schedule. NASCAR has not yet released the 2021 schedule. To aid the Truck Series, NASCAR should reduce the number of races on large tracks and add more short tracks.

I wrote about five tracks NASCAR should add to the Truck Series schedule. In addition to those five tracks, other possibilities are Five Flags Speedway, South Boston Speedway, Evergreen Speedway and Lucas Oil Raceway.

At a track such as Pocono Raceway, equipment and tires are a premium. For underfunded teams, it is an expensive and daunting weekend. Not only do new tires cost money, but the disparity in equipment can be an embarrassment for teams working with less money. So why should a part-time team compete there? But if NASCAR opted to move that race to South Boston Speedway, owned by the same family, there may be more entered drivers.

Drivers under age 18 can compete at short tracks. Would more Truck Series races at short tracks entice teams to field additional entries for drivers under age 18? The same could be said for late model stars Stephen Nasse and Bubba Pollard, both of whom have raced many times at Five Flags Speedway. If that track can host the prestigious Snowball Derby, it certainly could host a Truck Series race. Furthermore, the allure of contending at one of their best tracks may convince them to seek a Truck Series ride.

In addition to drivers under age 18 competing, short tracks generally are not as abrasive on tires and equipment as 1.5-mile tracks. Teams should thus save money long-term.

I am not extremely knowledgeable about the components of the Truck Series vehicles, but I think NASCAR should give the teams more leeway in the rule book. If a part-time team finds a way to save money and still be competitive, then it may compete more.

Outside of the schedule and the rule book, NASCAR can also save the teams money by hosting more one-day shows. Yes, traveling from teams’ shops to race tracks are often more than a one-day drive, but NASCAR could host the Truck Series races akin to many late model races. Practice, qualify and race all on the same day. This way, teams could leave the race shop later, saving money on additional overnight stays. Less money spent helps the teams’ bottom line.

For example, at Chicagoland Speedway last year, Truck Series teams practiced Thursday afternoon but qualified and raced on Friday night. So, the teams arrived at the track on Thursday morning and did not leave until late Friday night. If NASCAR held the practice, qualifying, and race all on Friday, teams could arrive either late Thursday or early Friday morning and leave after the race on Friday. For the part-time teams, less time spent at the racetrack is valuable as it allows them to save money and spend the extra time seeking sponsorships, preparing for the next race, etc. – all aspects which could lead them to compete in more races.

Lastly, NASCAR needs to inject more money into the Truck Series. Former Truck Series team owner-driver Tommy Joe Martins wrote a proposal on how NASCAR could help the financial well-being of Truck Series teams. The Triple Truck Challenge is also a good invention. More money will incentivize more teams to show up – look at the three Cup Series drivers who sought the bounty on Busch.

If NASCAR makes these changes, then more Truck Series teams will compete. These teams will be better off financially and will in turn reward NASCAR for its decision to expand the Truck Series field. – Mark Kristl

That Ship Has Sailed

The NASCAR Gander Outdoors & RV Truck Series is the favorite division of many NASCAR fans. It’s small enough to still have independent campaigners like Jordan Anderson and yet formidable enough to include the big-name drivers and teams NASCAR fans have become accustomed to over the last two decades.

From about the 2000 season to through the 2014 season, the maximum entries for a truck race was 36. Due to decreasing field sizes and expanded costs, NASCAR decided to subtract four entries from the field and narrow the maximum field size down to 32 trucks starting with the 2015 season. Since then, that’s been the limit.

The purse size stayed the same. This gave the 32 teams who made each race a bit more money because four less entries were now being paid and that money would be dispersed among the remaining teams.

That extra money has helped Truck Series teams compete without really impacting the competition. I prefer the quality of race teams over quantity. I love the idea of the Truck Series, but it is getting old watching some Truck Series teams never improve and always run over 10 laps down. All they do is clog up the racetrack and affect the show.

I get it. Teams need to start somewhere, and when you raise the bar too high, it’s hard for smaller, independent race teams to compete. However, it has been this way for over five seasons, and unfortunately, the 36-entry ship has sailed. Expanding it back to how is used to be would just worsen some underlying issues. When you think about who trimming the field hurt, is it really that big of a deal?

The Jordan Andersons of the world are not going away by limiting the field. Anderson has a pretty competitive race team. He’s not going to win a championship anytime soon, but he adds to the show and competes. He does the best he can with what he has. I am not sure that is the case with some other race teams in the Truck Series field. Instead of making them qualify for a spot on the grid, you are now locking them into the race and hurting the other teams who compete while you do it.

Brad Keselowski shut down a very competitive Truck Series team a few years ago. Red Horse Racing did the same. They had the extra money from trimming the field and still couldn’t find the funds to continue their operation. I would hate to see that happen again, but you are flirting with that if you expand the field back to 36.

What will happen if we suddenly tell these teams – sorry the extra money that you earn each week from trimming the field a few years back is now gone? Go find another way to earn that money. We need to get four more field fillers into the field, so good luck to you. That concept would hurt entertaining drivers like Jordan Anderson. It could hurt an organization like ThorSport Racing. It could hurt a team like GMS Racing. The list goes on and on.

All these teams that rely on the Truck Series dollars to compete will be hurt by reducing the amount of money they earn in each race. And for what? To add four more back-markers to the field? No thank you!

Sometimes it’s not bad to trim the fat. Expanding the field back to 36 would hurt the series more than it would help it. For someone who respects the independent teams more than anyone, those four extra spots wouldn’t make that much of a difference. – Clayton Caldwell

I’m in favor of any proposal that eliminates Kyle Busch from the Xfinity and Gander fields. I get he is a better driver than the series regulars. I get he has better equipment. What I don’t get is why NASCAR lets him destroy the race’s dynamic. Taking the potential for a good show and turning it into a no show.

Even I know there is maybe 20 competitive trucks and the rest are either start & parkers or back markers
with no hope of ever moving up since they end up several laps down every race.

your mother
Reply to  Matthew Marks

What you apparently don’t know is that the trucks may be a national touring series, but it is still really a quasi-pro amateur series. Everybody who shows up should start as long as there are enough pit stalls. If you are not satisfied with the quality, you know the alternatives.

40 drivers is way too many. So is 36. In Tuesday’s race, we saw good drivers tangle with incompetent and/or inexprienced drivers. Their night’s were ruined. Quality is better than quantity.

But now it isn’t about quality. It’s about drivers who bring more money and buy their ride who wouldn’t otherwise have the ride. There’s not enough quality in CUP for 40 cars. It’s the same drivers in Cup who seem to cause the problems.

These are the best articles – where there is debate over an issue and all sides are heard. Hope to see more of 2-sided.