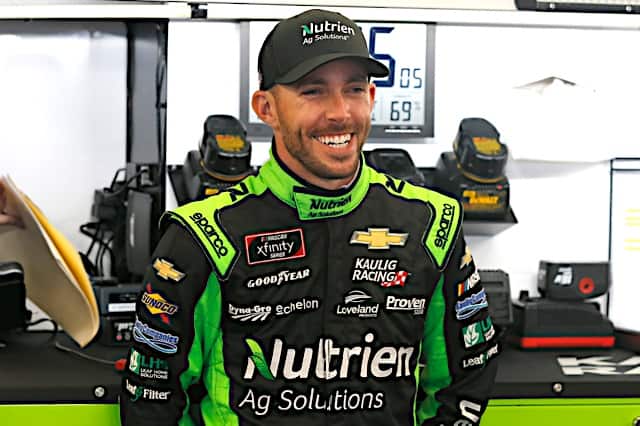 Over the course of his 10-year NASCAR career, Ross Chastain has never had stability for an extended period of time. Now, he’s found it.

Everything went haywire for Chastain following the DC Solar sponsorship debacle during the 2018-2019 offseason that left him without a ride at Chip Ganassi Racing in the NASCAR Xfinity Series. After regrouping, his plan was to run the full Xfinity Series schedule, split between JD Motorsports and a trio of races with Kaulig Racing.

Plans changed in June when Chastain declared for Gander RV & Outdoors Truck Series points running for Niece Motorsports, as he had run every race up to that point. He was eligible for the championship, where he went on to finish runner-up in the standings to Matt Crafton. Regardless, he had a standout year, winning three races and recording 19 top-10 finishes in 23 Truck Series races.

Meanwhile, his three races for Kaulig turned into six and even gave the organization its first career win at Daytona International Speedway in July. He had a second-place finish at Texas Motor Speedway and two other top 10s.

In mid-October, it was announced that Chastain would join Kaulig for the full 2020 Xfinity season, piloting the No. 10 Chevrolet, sponsored by Nutrien Ag Solutions. That, in itself, is a perfect match with Chastain’s watermelon farming background, as the team, owned by entrepreneur Matt Kaulig, is in the midst of its fifth season.

“I remember the night Elliott called me,” Chastain recently recalled to Frontstretch. “I was up in Dover, Delaware, doing some promotions, and I got a call from a blocked number. Normally I don’t answer, but I answered, and he goes, ‘Hey man, this is Elliott Sadler. We’re just letting you know we’ve got a sponsor here and they’re going to get behind you and you just do your job, you do what you do. I’m telling you, y’all don’t even know each other yet, but y’all are going to love each other and they’re going to sponsor you and take you places you’ve never even dreamed of.’

“I said, ‘Elliott, that’s you.’ He’s like, ‘I’m telling you, just answer the calls when they call, meet with them when they want to meet.'”

During his career, Chastain had never had a full-time sponsor. Last year, there were races where his truck was blank, even while he was competing for a championship.

Late last season, it appeared that there were many paths for Chastain to take in his career. However, he begs to differ, noting, “Not as many as everybody was talking about.” He is contracted to Chip Ganassi Racing, though, and as Ganassi has stated multiple times, there is a plan in place for Chastain with the team.

The decision to run the 2020 season with Kaulig was a no-brainer for Chastain, as he says it’s the highest-end Xfinity team he’s ever worked with: everything from the personnel to the haulers to the race shop is of better quality.

“Matt [Kaulig]’s not going to let us go without,” Chastain said. “Even sometimes when teams are funded, there’s something holding it back. Matt’s like, ‘I don’t care. As long as they look good, you build whatever you need to and you buy whatever you need to.’

“This is by far the most amount of dollars spent on a racecar, barring probably the Cup car now.”

In the past, Chastain has been known for building teams up, sometimes overstepping the equipment’s boundaries. Even while driving for Premium Motorsports in the Cup Series for the majority of 2018 and 2019, he would overachieve, finishing in the low-20s to high-30s.

With Kaulig, that’s not necessarily needed. In addition to winning at Daytona, Kaulig was victorious at the Charlotte Motor Speedway ROVAL in September with AJ Allmendinger. Justin Haley had a career season for the race team as its full-time driver, recording four top-five finishes and 20 top 10s. Austin Dillon also had a top-five run last spring at Las Vegas Motor Speedway, while Sadler had a top 10 in the fall. Combined, those five drivers had nine top fives and 29 top 10s in 2019. In its first three years of existence, the team had just 22 top 10s between Dillon, Blake Koch and Ryan Truex.

With the uptick in performance, Chastain has no worries with Kaulig, even while adding a second full-time team.

“They’re already here,” Chastain said. “They’re doing all of the right work. … I do take pride in [making teams better], but it’s all about those guys. I’m not the one determining what left rear spring we’re going to run at Vegas or how much packer we’re going to run in the right front at Phoenix. I’m not an engineer, I don’t know any of that.”

The Nos. 10 and 16 teams both failed to qualify in the season opener at Daytona. Kaulig elected to buy out the No. 38 of RSS Racing – scheduled to be driven by Jeff Green – in order to get Chastain into the show.

Six races in, and with the exception of the Daytona mishap, it’s been a solid start to the 2020 season for Chastain. Earlier this week at Charlotte, he led 68 laps (the most led in a single race by a Kaulig car) en route to a fourth-place finish. Dating back to the second race of the season at Las Vegas Motor Speedway, he has achieved five straight top 10s.

The goal, though, is to win the championship. And that would be a Hollywood storybook ending to Chastain’s past few years, where at one time, he was driving a show car around town to promote the Governor’s Traffic Safety Committee in New York and the Office of Highway Safety in Delaware.

Chastain said: “Chris [Rice, competition director] says, ‘Our job is to make these racecars win.’ That started last year and through the offseason. It’s unlike any Xfinity team because it’s a Cup caliber effort that they’re putting in.”