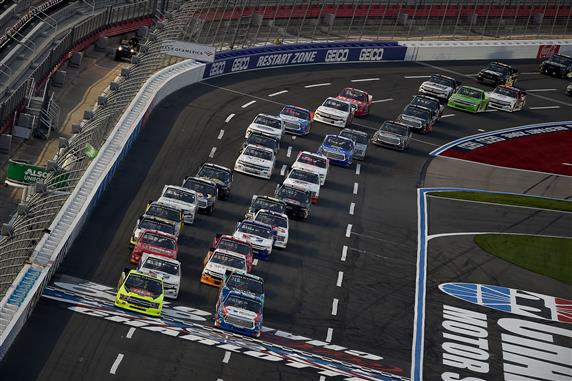 In a Nutshell: Despite the best efforts of Gander RV & Outdoors Truck Series regulars Johnny Sauter and Zane Smith, Tuesday’s (May 26) return to competition came down to the much-hyped battle of NASCAR Cup Series regulars Chase Elliott and Kyle Busch. And with a bow Bubba Wallace deemed “savage,” Elliott came out on top, breaking a seven-race winning streak for Busch and scoring his first Truck Series win of 2020, third of his Truck career and 14th overall victory in NASCAR’s national touring series.

Busch, Smith, Brett Moffitt and Sheldon Creed rounded out the top five. Elliott’s win over Busch allowed him to collect a $100,000 bounty, $50,000 from fellow Cup driver Kevin Harvick and another $50,000 from series sponsor Gander Outdoors via CEO Marcus Lemonis. The bounty funds will be donated to a charity of Elliott’s choice for COVID-19 response.

Look to the Short Tracks for Qualifying Revamp?

Given the shocking disregard that the short-track community of Altamahaw, N.C., just a few hours away showed for the progress NASCAR has made in getting racing back to operations, public safety and general common sense that individuals with an IQ comparable to Forrest Gump or a brick wall tend to have, it’s perhaps an odd time to look to short tracks for a way forward. But after seeing seven truck teams, including longtime series regular Norm Benning, shut out of Tuesday’s field with literally no opportunity to qualify on the merits, the question needs to be asked whether going to a short-track feature schedule in this current environment makes sense.

The Cup Series proved early Sunday afternoon that single-car qualifying could be handled with distancing protocols in place (though it was inexplicable to see the cars lined up side by side on pit road after the sessions were over).

So for the Truck Series, why not go to hot laps, then a last-chance open for trucks outside the top 25, 30 or whatever in owner points and giving open trucks a shot at the field? There’s no need to get wrapped up in backup trucks… run what ya brung. That can be done in a day, and if hot laps are limited to one run on track, it’d be easy to have drivers remove themselves from the cockpit and go back to isolation before the crews make any adjustments.

Get those trucks back to their roots!

Look to Formula 1 for Licensing Revamp?

What had been a clean opening two stages on Tuesday night melted down into a demolition derby for the first half of the final stage, and it was a lot of usual suspects involved in the incidents. Yellow fever first broke out on lap 78, when Jesse Iwuji, already black-flagged once for failure to meet minimum speed on-track, moved up as Stewart Friesen rapidly approached, triggering a three-truck wreck entering turn 1 that also collected Brennan Poole.

Iwuji, who’s no stranger to violent accidents, found Autoweek writer Matt Weaver (accurately) pointing out that this type of incident is not isolated (note the age of this tweet).

God bless Jesse Iwuji but he's a definition rolling chicane. It's an adventure when the leaders catch him.

Within a lap of the race restarting on lap 87, Natalie Decker joined in the fun, losing control of her truck in turn 2 and collecting what was left of Poole’s pickup. (Writer’s note: this tweet was chosen because the replay of said incident was conspicuously missing from both the NASCAR Trucks and NASCAR on FOX (en ingles) Twitter timelines. I’ll let y’all draw your own conclusions on that observation.)

Come lap 95, the yellow flew again for a spin on the backstretch. That spin came courtesy of Garrett Smithley, and while social media did indicate that debris on the track may have played a role, the fact remains that Smithley has been no stranger to trouble on intermediate ovals (see Las Vegas Motor Speedway in Cup, Kansas Speedway in the NASCAR Xfinity Series).

F1, while a different school of racing, may be onto something with their super license points system. Just like a civilian driver’s license, competitors involved in on-track incidents accrue points, with the penalty of being suspended from competition if they incur too many. This would be risky, because it could certainly give a manipulative sanctioning body a means to favor/protect its chosen few (license points if you bump Elliott!), but it also could start to hold back markers accountable for repeat issues on the track that have less to do with competing than they do simply making laps.

(Stop) Looking to Cup for Storylines?

As much as the Truck Series will get tons of attention for Elliott winning the now-famous “bounty” over fellow Cup regular Busch, the reality is Tuesday night’s race ended with no storylines to report for the regulars actually contesting the Truck circuit. This is bothersome on two levels. For one, this reliance on Cup stars to make minor-league races relevant was tried a decade ago ad nauseam in the now-Xfinity Series, with car counts and attendance suffering declines that will never be corrected during the same timeframe.

But, and this isn’t really the Truck Series’ problem, what does it say that a burgeoning rivalry between two of, if not the, two biggest names in Cup racing today is being played out on a AA-ball field? Wallace is right, Elliott’s trolling of Busch with a bow to celebrate on the start/finish line was savage, a true shot across the bow that demonstrates there might actually be something to this rivalry. Problem is, that’s a story racing needed to happen in Cup competition with a Cup audience watching.

Rookie of the Race: Smith. Smith drove a very solid race up until lap 112. A solid race became spectacular that lap, with Smith making a bold power move that saw him pass both Busch and Sauter to take the runner-up position on-track.

It was every bit the schooling that Ken Schrader put on Joey Logano at Rockingham Speedway in ARCA Menards Series competition back in 2008, only this time it was the rookie doing the schooling.

Points Update: Grant Enfinger has locked himself into the Truck Series playoffs with his win at Daytona. If the playoffs started today, Austin Hill, Sauter, Ben Rhodes, Moffitt, Creed, Smith, Eckes, Tyler Ankrum and Codie Rohrbaugh would point their way in. Rohrbaugh has a two-point advantage over Matt Crafton for the final playoff spot.

Up Next: The Truck Series is off for a week before returning to action in the Vet Tix/Camping World 200 at Atlanta Motor Speedway on Saturday, June 6. Coverage begins at 1 p.m. ET on FOX Sports 1; the race can also be heard on your local PRN affiliate or SiriusXM NASCAR Channel 90.