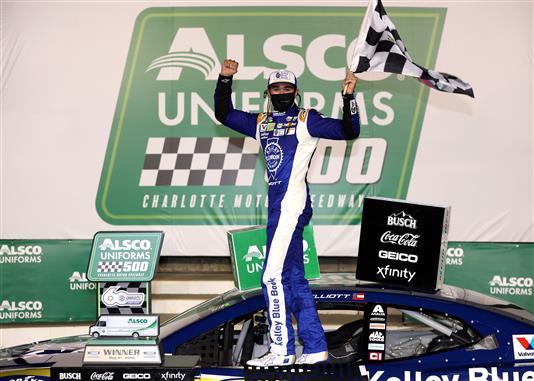 After heartbreak in the 2020 Coca-Cola 600 last Sunday, May 24, Chase Elliott found redemption at Charlotte Motor Speedway Thursday night, May 29.

With 27 laps to go, he took over the lead and drove to victory in the 2020 Alsco Uniforms 500, his seventh career NASCAR Cup Series win and first of this season.

Much like the Coke 600, Elliott led late in the race but admittedly was unsure whether luck would stay on his side.

“I was just waiting for a caution to come out, to be honest with you,” Elliott said post race. “The caution was going to come out, I was going to break something, or I was going to crash it. After the last couple of weeks, I thought surely it wasn’t going to go green to the end. Just glad it did, and we’re hopefully back on the right path.”

Elliott has now won twice at Charlotte over the past three days after also scoring the victory in the Gander RV & Outdoors Truck Series race on Tuesday, May 27.

“It’s been a tough week for sure,” he said. “We’ve had some tough losses, but that deal on Sunday night was a heartbreaker. It’s not the Coke 600, but any win in the Cup Series is really hard to get, and I appreciate everybody at Hendrick Motorsports. Just appreciate my team – Alan [Gustafson, crew chief] made a great call there at the end to get it tuned up. Luckily the run went long, and that fell in our favor.”

Elliott overtook Kevin Harvick with 27 laps to go. He had a fast No. 9 Chevrolet all race, finishing ninth and fourth in the first two respective stages.

The race was postponed due to weather after initially being planned to run on Wednesday, May 26, and the action immediately ensued when the green flag flew. Rick Ware Racing teammates Garrett Smithley and Joey Gase wrecked on turn 3 of the opening lap.

Mother Nature continued to affect NASCAR in its return to racing. On lap 30, Brad Keselowski, winner of Sunday’s race, slowed on the track. Matt Kenseth attempted to avoid him but ended up spinning. During the caution flag period, NASCAR detected nearby lightning, which forced a red-flag period of over an hour.

The second stage had an early caution but ended with a 39-lap green-flag run. Alex Bowman won the second stage ahead of Blaney, Logano, Elliott and Harvick.

With 72 laps to go, as he was leading, Bowman got loose, pounded the wall, and was forced to make a pit stop. The repair cost him laps and positions. He finished two laps down in 31st place, a disappointment after leading 51 laps.

Harvick led 54 of the next 55 laps before Elliott caught him.

Elliott then drove away to a 2.208-second win over Denny Hamlin. Blaney finished third. In fourth place, after gaining multiple positions on the final restart, was Ricky Stenhouse Jr. Kurt Busch rounded out the top five.

Elliott becomes the sixth different winner this Cup season. The Cup field will head next to Bristol Motor Speedway for the Supermarket Heroes 500 on Sunday, May 31.

The tracks might have to bring back some grandstands if they want fans, when allowed, to have the proper spacing. Some of the stands now have the same number of fans as before.