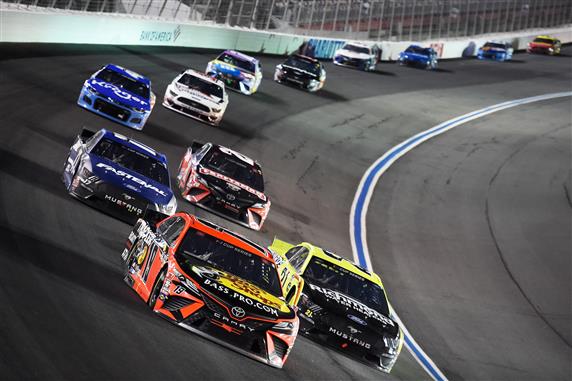 He might have won Darlington Raceway, but he got spun in the closing laps. He might have won the Coca-Cola 600, but a pit gamble left him just short. Thursday night, a day later than planned after rains at Charlotte Motor Speedway forced a delay, Chase Elliott would not be denied a third time.

Elliott started 19th based on his second-place finish Sunday, and he worked his way patiently forward. It seemed as though Kevin Harvick had an insurmountable lead late in the race, but the No. 4’s handling went south, and Elliott pounced, passing Harvick and getting smooth sailing to the finish this time out.

Ricky Stenhouse Jr. started 24th, but he had a rocket ship of a car. Stenhouse, known for his aggressive driving style, was able to channel that into some bold moves to take his No. 47 toward the front. After the final round of pit stops, Stenhouse powered into the top five, and there he stayed, finishing fourth. That’s a nice boost for JTG Daugherty Racing after some struggles in the last two weeks. Stenhouse is strong at Bristol Motor Speedway as well, and now he carries some momentum on his side.

It was early in the race, but one of the more fun-to-watch moments of the night came in the opening laps when William Byron and Matt DiBenedetto, two young drivers with their careers still in front of them, waged a terrific battle for the top position. The two raced hard and cleanly, with respect. It’s hard to ask for more than that in any on-track duel, and this is a pair we could see this more from as they both gain experience at the front of the pack.

Running up front is a skill, and it’s not easily learned, because it’s hard to get there, especially for a young driver facing experienced veterans who are used to running with the best of the field every week and finishing well consistently. Both Byron and DiBenedetto have the cars and are just now being able to use their experience to do that more and more often.

Polesitter Byron had a solid race, but after losing the lead on pit road under the competition caution, he had a top-10 car but that was about all. Contact with Corey LaJoie in the pits caused minor damage, which may have affected the handling of the No. 24, and by the end he couldn’t hang onto the top 10, coming home 12th.

600 winner Brad Keselowski had some handling issues early on, but his team was able to do a good job keeping up with mercurial Charlotte. That’s not so easily done, and as a result, Keselowski improved as day turned to night. He scored a solid top 10, finishing seventh. Keselowski hadn’t been as strong as his Team Penske teammates earlier this season, but while he still trails Joey Logano in wins and points, he’s showing why he’s still a valuable commodity for sponsors as he preps for free agency after the season.

All-time Charlotte win leader Jimmie Johnson started shotgun on the field after his second-place finish on Sunday was disallowed when the No. 48 failed post-race inspection for rear skew. Johnson gained ground fast early, moving up to 23rd by the lap 20 caution. Damage in the second half of the race hurt the handling of the racecar, and Johnson was frustrated with lapped traffic as the laps wound down, but he salvaged an 11th-place finish on the day. After the last couple of races, he’ll take it.

Defending Cup champ Kyle Busch might like to forget this one. He lost two laps after a cut tire send him to pit road for a change of rubber and repairs to his fender. He recovered one of those laps, but wasn’t able to regain the lead lap, and the handling on his car was affected by the damaged fender, leaving him with a 29th-place finish for his day. It’s Busch’s second finish of 26th or lower since NASCAR’s return, to go with a pair of top fives. Busch and co. need to straighten the ship; then the winds will be more favorable.

It might have come with just over 70 laps remaining. Alex Bowman, who had a car capable of winning and who has been strong since NASCAR’s return last week, scraped the wall, not bringing out the caution but causing enough damage to the No. 88 that he had to pit for repairs and would not contend for the win.

Given how Bowman has run of late, it may have given the other leaders a big sigh of relief. He’s turned himself into a weekly threat, currently sitting third in points. What Bowman still needs to do regularly is improve his finishes; he’s running better during the races than his finishes have shown on multiple occasions. If he can do that, the driver who once looked like his time in the Cup Series might be over before it really started could make himself a legitimate title contender. Time will tell.

One thing that’s come out of the no practice or qualifying format that NASCAR is using is that we’re seeing some different faces near the top of the pylon. John Hunter Nemechek had a surprising top 10 at Darlington, and at one point on Thursday, Nemechek and Bubba Wallace were inside the top 10. Nemechek finished a solid 13th Thursday night, the top rookie in the race. Tyler Reddick has shined at both tracks, finishing 14th this time out and extending his Rookie of the Year lead.

Maybe, just maybe, this is part of the answer to bringing the type of parity the sport actually needs. The cars may not be equal in terms of parts and pieces and fancy gewgaws, but some of these teams can race the tracks well. NASCAR would do well to remember going forward that this has improved the sport from a competition standpoint.

How… come there are no double-ups on short tracks?

Don’t get me wrong, Darlington and Charlotte made a lot of sense to start because of their proximity for teams, but why travel to Homestead-Miami Speedway in June? With the coronavirus still a large risk to the sport, why not stay close to home and run a Sunday-Wednesday special at Bristol or Martinsville Speedway, both of which are easy trips from Charlotte?

Even Atlanta Motor Speedway is a stretch at roughly four hours, and we’d certainly see better shows at a short track. Instead, NASCAR elected to actually remove one from the schedule, Richmond Raceway, that is still closer to Charlotte than Miami. It makes little sense on multiple levels.

be interesting to see what the state of ga does. they’re opening up a local raceway this weekend to fans. maybe by time they come to atlanta a limited number of fans might be permitted? ga is opening up large venues 6/1, but not concert venues, but the state has given green light to professional and non-professional teams to start practice.

i fell asleep. mother nature sure does not seem to like nascar much.

kind of glad elliott won. i wonder if the siren went off in the wee hours for his win.

“but why travel to Homestead-Miami Speedway in June?”

in hurricane season too! mother nature sure hasn’t liked nascar this year.

The Rain Gods still hate what Brian did.

It is interesting that the racing seems to be better w/o formal qualifying and practice. Personally I like it.

I agree, but I’m tired of these competition cautions at the start of these races. It does nothing but make these races longer and turns off the casual fans who tuned in to the start of the race, just to see it stopped multiple times before the 100 mile mark. I sure hope that Nascar will see that the shorter distances of these races is the smarter way to go moving forward, too.

Someone still needs to explain to me why a race that has no competition from other sports on a Sunday doesn’t start until 6pm. I still don’t get the thought process on that one.