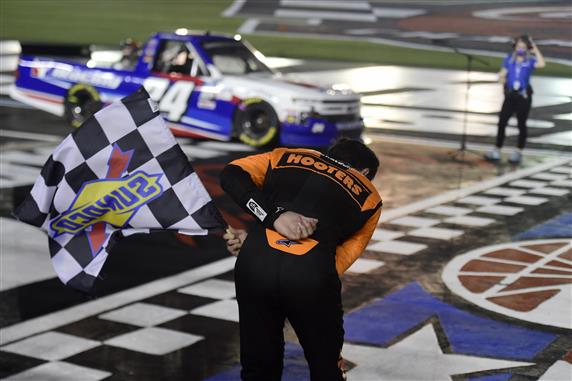 Chase Elliott’s blue, white and red Chevrolet flashed across the finish line less than a second before Kyle Busch’s red-and-black Toyota did in Tuesday night’s Gander RV & Outdoors Truck Series return at Charlotte Motor Speedway. In doing so, it took just one race for Elliott to win the bounty placed by Kevin Harvick, challenging any Cup driver to beat Busch.

The bounty proposition was set to award $50,000 from Harvick, an amount matched by Camping World CEO Marcus Lemonis, but before the Truck Series next race at Atlanta Motor Speedway, COVID-19 hit the world, putting racing and the bounty on hold. When the series finally got back on track, nearly three months after its last race, Harvick reiterated that he would still honor that bounty, albeit with a minor adjustment.

The bounty is still on for tonight’s @NASCAR_Trucks race. However, in the current environment, the $50,000 donation will be made in the name of the cup driver who is eligible and beats @KyleBusch to a covid-19 relief effort of their choice.

With Elliott claiming the bounty already, Lemonis put up a new challenge, this time dedicated to Truck Series crews.

While much focus was placed on the bounty throughout Tuesday’s race, there were a number of storylines going in, too.

The biggest storyline outside of the bounty was probably Brett Moffitt, who broke both legs in a motocross bike accident the week after the season was postponed. On the bright side, the two-month hiatus gave him time to recover and he was back in GMS Racing’s No. 23.

Also, there were three full-timers from the Cup Series in the event – Elliott and Busch, of course, along with John Hunter Nemechek. Front Row Joe’s son has had some solid runs with Front Row Motorsports so far in 2020.

Two other upper-series racers were also entered – Ross Chastain, now full-time in the Xfinity Series, debuted Niece Motorsports’ No. 42 entry on Tuesday with the familiar watermelon paint scheme. That No. 42 is so new, it still doesn’t have a tab on the team’s Wikipedia page.

Also running for Niece was NASCAR journeyman Garrett Smithley, who’s scheduled to race in all three of NASCAR’s main divisions in 2020.

It was a diverse night up front – Ben Rhodes led the field to green after the random draw set the starting order, but points leader Austin Hill quickly got by to take the lead. Chastain then used the competition caution to close in and pass Hill, winning the first stage.

Meanwhile, Matt Crafton and Todd Gilliland both ran well but suffered dramatic issues late in the race. Another notable regular, Stewart Friesen, was caught up in an incident with the lapped truck of Jesse Iwuji.

The intriguing race only got more enthralling with every passing lap. Busch had already had quite the week – this was his sixth race in ten days, having raced in every event since the sport returned at Darlington on May 17.

He was embroiled in controversy after a misjudged move sent fan-favorite Elliott into the wall last Wednesday, battled with Chase Briscoe all the way up until the checkered flag on Thursday and then had a solid run in Sunday night’s Coca-Cola 600.

Busch followed that up with a dramatic win on Monday. Leading much of the Xfinity Series’ race at Charlotte, he was hit with a pit road speeding penalty late and fought his way back through the pack. Driving like a madman on an overtime restart, Busch wheeled his No. 54 around Austin Cindric on the final lap to take the win.

And, to top it all off, the bounty on Tuesday night meant Rowdy returned to the spotlight once again and had his third run-in with Elliott in less than a week – after the contact at Darlington, he and Elliott ran bumper-to-bumper at times in the 600, Busch later paying Elliott a visit on pit road after a pit call cost the No. 9 the race.

Viewership certainly benefited from both the day of the week and quarantine itself. The Tuesday night race and the state of the country meant more viewers might be tuning in, and that paid off. Fox Sports 1 held the top spot in cable sports viewership that night, with 778,000 television sets displaying the Truck Series’ return. Last year’s event at Charlotte – on a Friday – sat at 559,000, a jump to 2020 of about 39%.

Whether it was the bounty, quarantine itself or simply because it was a Tuesday, the Charlotte race was a boon for the Truck Series and should spark even more interest in an already-exciting series.