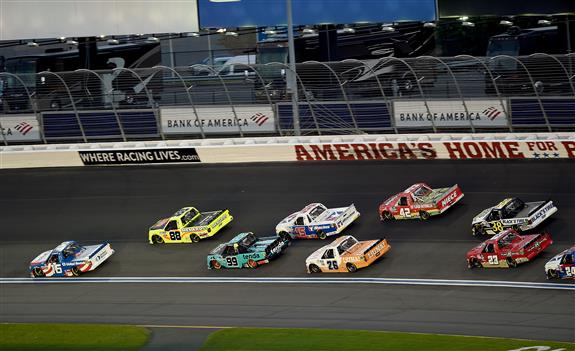 NASCAR is back and better than ever. Yes, all three series have finally returned to competition now and we have seen some excellent races in the return. One reason could be the shorter races we have seen in the NASCAR Cup Series. While the Xfinity and Truck series both have significantly shorter races than Cup, the midweek races have been an opportunity to test it at the top level. It has worked and in a big way too.

Are shorter races the way to go in the future? If they do that, should they do no practice for them? Or are the regular lengths just fine and it is more of a car and package aspect?

We are approaching the time of the season that NASCAR will have to make a decision. After Talladega in the middle of June, the schedule is slated to return to normal, for now. With what we have seen, there could be debates as to whether we should see changes to weekend schedules.

Should we keep the default three-day schedule with practice and qualifying? Would limiting practice time help the racing in the future? Should qualifying be the only event of the weekend?

Q: Will shorter races be a trend in future seasons or are the regular lengths fine the way they are? Tim D., Waco, TX

A: Shorter races have been great for the first two weeks at Darlington Raceway and Charlotte Motor Speedway. However, they should not be a common thing in the future. While others may love the shorter races, the regular length races are what we need. The exciting thing about short races though is they make the drivers push every lap versus using patience in the longer races.

Before this pandemic, shorter races were a discussion in Cup but they were not implemented and probably were not going to be. The only time we saw shortened Cup races this season was going to be the Pocono doubleheader coming up in June. Other than that, every Cup race is due to run full length.

Here is what the issue is or has been with long, drawn-out races and that is the car. We all may be tired of hearing about the package, but sadly it is what makes the cars race the way they do. This package has been great for restarts especially on intermediates, and sadly, some of the races become spread out and quite frankly, boring when that happens.

The reason fans may like the shorter races is not only for intensity but because this package creates crazy restarts, and with that comes shorter stages and less of a chance for the field to become spread out. However, short tracks and one-mile tracks do not have this issue. That is where everything is fine.

When you put all the pieces together, we are better off having the race lengths remain the way they are. As far as mid-week races go, maybe one or two could be shortened like they have been but do not make this a common thing. NASCAR’s top level has been all about long races and patience which is something you learn as you make it to Cup.

This discussion will probably not be something we will have to deal with in 2020 but for the schedule in 2021, that has yet to be determined what NASCAR will do. Race lengths are important to many fans and drivers and we know NASCAR will do what’s best for everyone involved.

Q: Should NASCAR cut out practice and qualifying for the future races this season? Or should it be limited practice plus qualifying? Allen R., Harrisburg, NC

A: The best thing NASCAR has done since returning has been the no practice aspect. Simply put, it has created some great racing. Practice is always a time where teams have multiple opportunities for hours to tune their cars and get them race-ready. Without practice, no one has a shot at the racing surface and the time to tweak their car to perfection. Instead, it becomes a battle of setups and adjustments throughout the race, which has led to more excitement on track.

However, with that said, limited practice is something NASCAR should look at in the future when everything goes back to normal. Three practices for more than an hour each is something all of us have learned we do not need. Qualifying should still remain though and, that is one thing that should not change.

The invert that we have seen too with the mid-week races is a fantastic format. We have seen drivers praise what NASCAR has done with that and it is almost the perfect storm. Rather than qualifying, the invert of the top 20 finishers has created quite a bit of chaos and that is what makes these races so great. The fast guys still find their way to the front as always but it takes time to come through the field.

Unloading and racing is not going to be something these drivers and teams will do much longer more than likely. At least for the time being, that is the norm. It appears that a lot of drivers do not hate it at all, but it will not last because everybody will need some sort of track time before the race every weekend.

I applaud everything the sanctioning body has done to get things back going. It has been so refreshing to see racing again, and the formats we have seen add to it. We have all been frustrated at one time or another with the sport but we can all agree that it is great that things have been up since returning. While this format may not last much longer, it has been fun to follow and watch. For the next few weeks at least, we are gonna see some more great racing and then hopefully by the time we reach the end of June, we will be closer to normal again.

Although I agree that the “new” format has made for excellent racing, I don’t expect it to remain this way for long. The lose of revenue that goes with not having practice, qualifying, and at some tracks an additional race (ARCA) will not happen for long.

I don’t like this article. You are presenting questions and answering it as if what your saying is fact. These are simply your opinions. Its misleading to me. But then again, I never liked reading a so called fact based article only to have the writer constantly giving his/her opinion on it, like it is fact.

I would like to see more shorter races in the future, even when we get back to normal. So this author doesn’t speak for everyone in the nascar community.

Since they are obviously asking questions that have no answer BUT a personal opinion, I don’t see the problem here. We all have opinions…as you so aptly expressed yours, and they are all equally valid. You are free to disagree with the opinions, or free not to read them, your choice.

Well the article says “Mailbox” which I take as he is answering questions from folks that are looking for factual answers. Since he’s giving his opinions on it, it could be easily construed as fact. Its misleading and that’s my issue.

The lines between fact and opinion in journalism aren’t clear anymore, no matter the source and I think that’s a problem and I am free to call writers out on it if I so choose. And I think its pretty clear when someone reads a comment section, they are reading people’s opinions, so I don’t understand your point there.