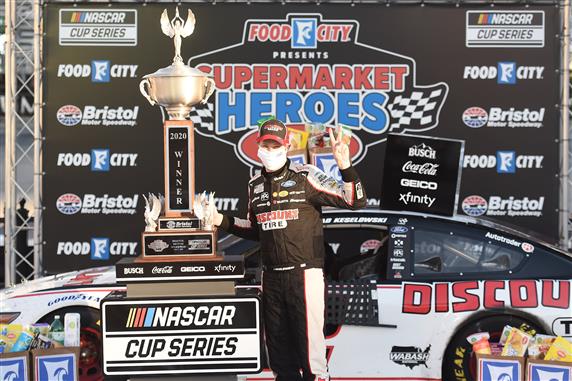 At this point, Brad Keselowski and his team may as well purchase a few lottery tickets. Given their recent luck, they’d likely hit the jackpot.

Keselowski found himself in the right place at the right time to take advantage of Chase Elliott’s late-race misfortune for the second time in three races, going on to win ahead of Clint Bowyer after Logano and Elliott made contact while racing for the win with three laps to go.

Here's a look at what happened between @joeylogano and @chaseelliott with three laps to go at @BMSupdates. pic.twitter.com/aADnCUwFk4

Bowyer drove under Logano and Elliott to finish second while Jimmie Johnson came in third. Kyle Busch and Erik Jones rounded out the top five.

Keselowski won last Sunday’s Coca-Cola 600 after Elliott pitted in the closing laps rather than staying on the track.

“I could see Joey and Chase getting really racy there, I didn’t know what was going to happen, I just kept my eye open, hoping something good might happen, and it did,” Keselowski said. “This was a ‘never give up’ effort, and that’s what we’re becoming as a team.”

With three laps to go in Sunday’s Thank You Supermarket Heroes 500 at Bristol Motor Speedway, Logano and Elliott were locked in a fierce battle for the lead. Bouncing off of one another, both saw their chances of a win crumble when Elliott’s car washed up the track in turn 4, ending hopes of victory. Logano finished 21st, one ahead of Elliott, and both engaged in a conversation on pit road after the race while wearing protective facemasks.

The late dramatics were hardly the first foray toward the front for either Logano or Elliott. With a sweep of the first two stages, Elliott claimed his fifth overall stage win of the season. With 29 laps to go, Logano and Elliott were among a cluster of drivers with a chance to win along with Denny Hamlin, who had to that point turned away charges at the lead by Elliott, Johnson while also overtaking Kyle Busch, who led three times for 100 laps.

A crazy sequence of events at @BMSupdates! @dennyhamlin goes from leading to spinning in a matter of moments. pic.twitter.com/DXUpJagx15

Hamlin led the most laps Sunday, pacing the field for 131 while Keselowski actually led 115.

The caution flag waved 17 times, none of which were more impactful on multiple cars than an eight-car incident on lap 231 that brought out the red flag.

When Ricky Stenhouse Jr., appeared to check up to avoid hitting Matt Kenseth, he was hit from behind by Johnson, triggering a melee on the backstretch that stopped the race for more than 11 minutes. Other drivers involved were Alex Bowman, Tyler Reddick, Cole Custer, Kurt Busch, Ryan Preece, and Michael McDowell.

Ryan Blaney, who showed early promise by running within the top five saw his afternoon end prematurely when he got loose in the marbles coming off of turn two and got into the outside wall, coming down the track and colliding with Ty Dillon.

Take a look at the crash involving @Blaney and @tydillon during Stage 2 at @BMSupdates. pic.twitter.com/Xc6kU0du9w

“I was way high and that’s obviously not where I wanted to be, but I didn’t think I was that high getting in there,” Blaney explained. “It might have just been trying to get too much and got in the marbles and spun out.  I thought we were gonna be okay and then we got destroyed about six seconds later, so that’s just Bristol and a part of Bristol.

“I probably shouldn’t have been pushing that hard, but trying to get back to the lead.  I thought we found some speed up there, just a mistake on my part.”

A pair of rookies finished well at Bristol after facing their own obstacles. Christopher Bell, who suffered an uncontrolled tire penalty on lap 435, finished ninth. Meanwhile, John Hunter Nemechek recovered from a broken spark plug that saw him restart 17th with 10 laps remaining to finish 13th.

The Cup Series heads to Atlanta Motor Speedway next weekend for the Folds of Honor QuikTrip 500 on Sunday, June 7. Race coverage begins at 2 p.m. ET on FOX.

Ugh, Brad. But that as they say is racing!