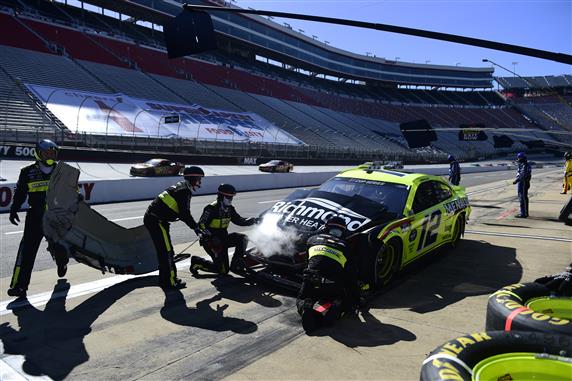 Bristol Motor Speedway apparently did not get the memo about being a “self-cleaning racetrack” during Sunday afternoon’s (May 31) Supermarket Heroes 500.

A lap 200 spin by second-place runner Ryan Blaney off turn 2’s outside wall sparked a number of crashes in stage two. Ty Dillon was also eliminated in a wreck he just couldn’t avoid once Blaney got loose in front of him.

“I was way high and that’s obviously not where I wanted to be, but I didn’t think I was that high getting in there,” Blaney said. “It might have just been trying to get too much and got in the marbles and spun out.”

The crash continued a frustrating stretch for the Team Penske driver at Thunder Valley. In the last five Bristol Cup races, he’s led 439 laps but failed to win, collecting only one top-five finish compared to two DNFs.

“I thought we were gonna be OK and then we got destroyed about six seconds later,” he said. “So that’s just Bristol.  I probably shouldn’t have been pushing that hard.”

Less than 30 laps later, several cars were caught up in a much more damaging incident.

On the race’s 228th lap, Ricky Stenhouse Jr., appearing to check up to avoid Matt Kenseth as he raced down the backstretch, was tapped by Jimmie Johnson’s No. 48. Stenhouse spun up into the middle of the track and oncoming drivers had absolutely nowhere to go.

In all, the incident collected eight cars, bringing out the red flag. Among those caught in the melee were Stenhouse, Johnson, Tyler Reddick, Alex Bowman, Kurt Busch, Cole Custer, Ryan Preece and Matt DiBenedetto.

Jimmie Johnson gets into Ricky Stenhouse Jr. and triggers a huge crash at Bristol. pic.twitter.com/Mq6X7Svb9Z

The wreck ended the day for Stenhouse, Custer, Reddick and Bowman.

“We just got crashed,” Stenhouse said. “Two weeks in a row, I feel like, we had one of the best cars I’ve had at that given race track. We were just racing hard. The No. 42 (Kenseth) had to check up and the No. 48 (Johnson) just ran into our left rear and spun us. But, it was a bummer.

“I felt like we had a really good shot at racing them for the win. He about got us last week. He got us this week. But, it’s just part of it. It’s short-track racing.”

Stenhouse had been in contention most of the day on the heels of a top-five finish Thursday night in Charlotte. Instead, he left with his second DNF in the last five races.