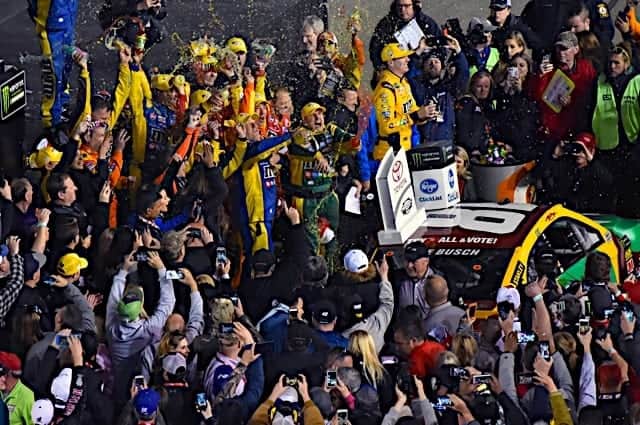 Hey Boy Blue, can’t you hear all the noise?
It’s for you, all the town’s waiting there. – Jeff Lynne

It seems like ancient history now, but last week at Charlotte, Chase Elliott finally broke through with his first Cup win of 2020, shortly after edging out Kyle Busch for the Truck Series win at the same track. Some Elliott fans (and there’s a bunch of them) had already begun adopting a doomsday attitude. After the late-race incident at Darlington and the suspect pit call near the end of the World 600, some pessimists were wondering how the scion of Elliott family was going to find a way to wrest defeat from the jaws of victory yet again. Even the young Georgian driver admitted he was waiting for that late-race caution flag again, or to wreck or have his car break as the laps slowly ticked away Thursday night.

Call it the Coyote Complex. Every episode that Wiley Old Coyote seemed on the verge of finally having a nice roadrunner dinner with an assist from his pals at Acme (Acme was apparently the Amazon.com of the ’60s.) But at the fateful moment where that bird was about to become dinner, cue the dropping anvil whistle. The Coyote knowing the hand fate had once again picked him as their whipping boy rolled his eyes upward and grimly accepted his fate. The anvil smashed him flat. Roll the credits. Mr. Peabody.

Truth is, as the winner his very own self admitted after the race, these days it’s tough to win a Cup-level race. Over the course of the season, you are going to watch your favorite driver lose more races than he will win, and if that’s going to have you standing in the front yard during an electrical storm holding two golf clubs over your head, you need to find a new hobby. There’s one notable exception to the “lose more than he’ll win” rule and we’ll get to that.

While they’d never admit to it for fear of showing bias, my guess is NASCAR officials were thrilled Elliott won the race despite all the mainstream press his close calls had earned them in media outlets that routinely ignore the sport. Under NASCAR’s boondoggle of a championship points system, the sport’s most popular driver is all but guaranteed a berth in this year’s championship hunt. That means come fall when the NFL behemoth overshadows all other sports (presuming there is an NFL football season this year), a lot of hardcore stock car racing fans will be tuning into race broadcasts, and if the grandstands are reopened by then, perhaps even buying seats to watch those races live.

One would think that a driver’s popularity would be closely tied to his on-track success. But that’s not always the case. Despite all the races and titles they won, neither Jeff Gordon or Jimmie Johnson has won a Most Popular Driver award. They both have millions of fans, but their respective fans must not vote early and often enough to earn them the honor.

Seven-time champion Richard Petty won the Most Popular Driver award nine times. The second time he did so was in 1964, the first year he won a NASCAR championship. Recall we were talking about every driver losing more races than he wins in a Cup season. In 1967, Petty entered 48 of the 49 Cup races (no driver could have run all 49, as the two qualifying races prior to the Daytona 500 counted as points races and drivers could only run one or the other). Of those 49 races, Petty won 27 of them, a record I am certain will never be approached, much less broken. And in 1967, Cale Yarborough was voted most popular driver.

Looking at the list of Most Popular Drivers, there are certain names that pop up as frequently as onion grass on a springtime lawn. But how often does the MPD title coincide with a championship? Not as often as you’d expect. The MPD award was first handed out in 1953.

In 1960, Rex White won the NASCAR championship and most popular driver award. The popularity award wasn’t related to the sweet-looking ride White drove that year. Those 1960 Chevys looked like half looted Mardi Gras floats back then.

Bobby Allison was both champion and the most popular driver in 1983.

So if I’m counting correctly, in the 67-year history of NASCAR’s Most Popular driver award, only seven times has that honor gone to the eventual Cup champion. Only five drivers have managed that trick.

Of course, some drivers skewed those numbers to a large degree. I believe the official name of the Most Popular Driver award is the Bill Elliott Trophy, an honor NASCAR conveyed back when the elder Elliott retired (for the first time). Elliott won every MPD award from 1984 to 2000 with the exception of 1989 and 1990, when Darrell Waltrip was named most popular. In 2001, Elliott withdrew his name from consideration for the award in hopes the honor would go to Dale Earnhardt, who had died in that year’s Daytona 500 — which in fact it did. Elliott reclaimed the honor in 2002 for the final time.

Chase Elliott has won the last two MPD awards, and I’ll wager that he’ll do so again this year and for as long as he chooses to continue driving. Thus, since 1991 only two surnames have appeared on the Most Popular Driver award.

Many folks I’ve told the senior Earnhardt only won that one MPD award are quite surprised. The man was in fact the face of the sport for a couple decades and won seven titles. If you based the MPD award on how many folks you saw strolling the streets and sidewalks of rural America in “Intimidator” t-shirts and ball-caps it would have been no contest. Hell, more fans probably got No. 3-related tattoos on their body than some drivers sold t-shirts. But also in that era you’d see an occasional t-shirt that read, “I Don’t Care Who Wins As Long As It’s Not That Black Number 3 Car.” Earnhardt and his “take no prisoners/rattle their cage” mindset made him an extremely polarizing driver. It never seemed to me that Earnhardt craved the MPD award. He noted one evening in Bristol when he had a little run-in with Terry Labonte and was booed loud, log and profanely, “Hell, if they ain’t cheering they damn well better be booing.”

One could make an analogy to a current Cup driver who (up until this season) won so routinely he made it look easy. That driver also draws a mainly hostile reaction in driver intros most weeks. Except at Vegas. That’s where he’s from and people are afraid if they boo him, he’ll get fired and move back there.

I look at the MPD award as a waste of time and total BS. Who cares?
But the entire article was a good set up for the punchline in the last paragraph. Ha ha ha. Good one!

It seems to me that the Rookie Of The Year award has lost its luster too.

Agree with you on the RotY award but this year is shaping up to be an exception (or at least more interesting than the norm).

just as jr,, chase is most popular driver cause of his name. elder elliott had a huge fanbase, just as the elder earnhardt. be interesting to see if chase can win a cup (oops, i mean premier) series championship.

i can remember that bristol race when sr said those words. seems like yesterday.

“people are afraid if they boo him, he’ll get fired and move back there.” Classic, Matt! As far as the “Dale the Greater” tee shirt, the best Tee I have seen is “I Hate Warm Beer, Cold Women, and Darrell Waltrip”.

Hey, Rich – is that a take-off on Bill Elliott’s Coors commercial: “I love hot women, cold beer and fast cars – but not necessarily in that order.”

And just a note on Bill’s MPD awards. His fan base may not have been as wide as Dale Sr.’s, but it was deeper. His fans were committed to voting, even in the day when it took more effort than it does today, with paper ballots and 1-900 phone voting.

I don’t know if the tee shirt idea came form that ad, but I would guess so. A friend of mine has had it for a very long time. He also actively supported the brands that advertised on NASCAR drivers and cars.

I’m with Bill B. The MPD is a waste of time. Once upon a time, maybe it made sense and as Jo mentioned, it took effort to do it before the internet.

Rich, that sentiment on the t-shirt made me smile.

FYI:
Bill Elliott won both the Championship and the Most Popular Driver in 1988.

@eddo: Correct! Matt must have had a “senior moment” when he missed that one.