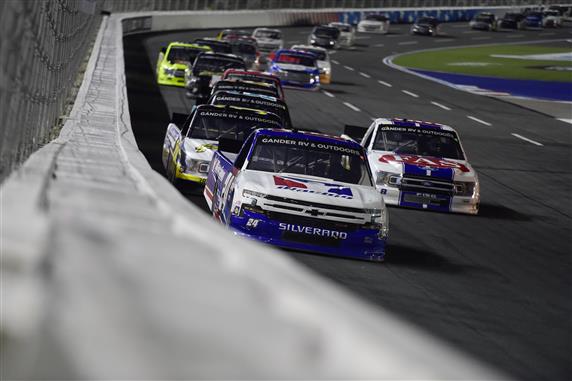 The Gander RV & Outdoors Truck Series will have a 40-truck field for the second race in a row in the Vet Tix/Camping World 200 at Atlanta Motor Speedway on Saturday, June 6.

Forty-seven trucks were on the entry list for Atlanta, but NASCAR capped the field at 40. David Ragan, who was scheduled to run in a second DGR-Crosley truck, will not make the race due to the truck’s lack of owner points. Missing the race too were Tim Veins, Norm Benning, Trey Hutchins III, Bryant Barnhill, Dawson Cram and Parker Kligerman.

Chase Elliott is back in the Truck Series, trying to win back-to-back races. Elliott won last week at Charlotte Motor Speedway and claimed the bounty on Kyle Busch. Busch is also back this week, as he will try to start another winning streak in the Truck Series.

Ross Chastain will again race the No. 42 Niece Motorsports truck, while Ryan Truex will replace Garrett Smithley in the No. 40 for Niece.

Gray Gaulding will pilot the No. 33 truck for Reaume Brothers Racing. Jesse Iwuji drove the truck last week and caused a wreck as he was being lapped by Brennan Poole and Stewart Friesen.

Another 40+ Trucks for ATL, Elliott and KyBusch in the field again @NASCARONFOX pic.twitter.com/11tECK00jG

The Truck race at Atlanta will start at 1 p.m. ET on FOX Sports 1.