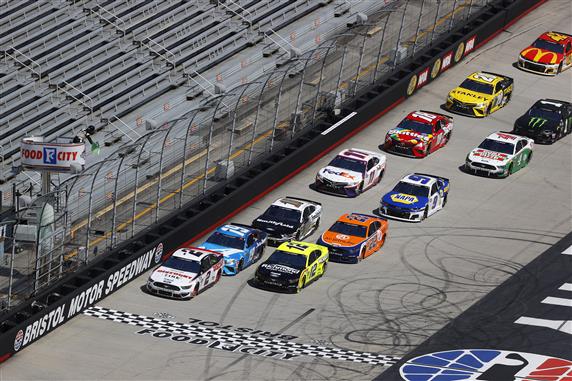 Because the world is still amidst the COVID-19 pandemic, fans aren’t allowed to attend NASCAR races through at least June. That’s unfortunate because the grandstands would have gone bonkers on Sunday (May 31) at Bristol Motor Speedway.

Not only was Most Popular Driver Chase Elliott in contention for another victory, but he also got into an altercation with another one of NASCAR’s villains. But, that didn’t warrant a caution, while scraping the wall early in the race did (more on that in a bit).

Thunder Valley lived up to its name, in NASCAR’s first true short track of the season. Time to dig in with this week’s Stat Sheet.

While all eyes have been on Hendrick Motorsports and the Chevrolets through the first quarter of the NASCAR season, it’s Team Penske that is getting the job done in the win column.

Through the opening four races of the season, Joey Logano won two races (arguably stealing each). At Las Vegas Motor Speedway, the No. 22 stayed out while many frontrunners pitted with an overtime finish remaining. At Phoenix Raceway, a rash of late-race cautions likely saved Logano, as Kevin Harvick was the best on the long run.

Chalk up two victories for Logano. But what about the rest of the team?

Brad Keselowski silenced people in last week’s Coca-Cola 600, winning similarly to Logano did at Vegas, as Elliott pitted with only a green-white-checkered finish remaining. Fast forward one week, and ironically, it was Logano and Elliott duking it out for the victory, ultimately putting each other in the wall. Who snuck through for the win? The No. 2 car. Keselowski.

32! Thinking our next stop should be Vegas ? pic.twitter.com/a7MyWuSk9B

Through nine races, Penske might be the team to beat. The old adage is, to finish first, you must first finish. Both Logano and Keselowski have been excellent at finishing races this season, as they’ve won 44.4% of races run in 2020.

Stats from today's race at @BMSupdates: @keselowski scores his second victory of 2020, third of his career at Bristol.

Through nine races this year, @Team_Penske leads the way with four wins. #NASCAR

While NASCAR had two competition cautions in the opening 60 laps of the race and two stage brakes on laps 125 and 250, the sanctioning body threw 13 traditional cautions on Sunday. With the addition of the other four, it was 17 for the day, the most at Bristol since 2006.

Now, some of these deemed cautions probably shouldn’t have been labeled such. On lap 238, Ryan Preece slapped the wall, enough so, NASCAR threw the yellow flag. On lap 268, Chris Buescher pounded the wall. Sure, call it a caution, debris likely scattered. But on lap 328, Austin Dillon blew a right-front tire and avoided all oncoming traffic and the wall, but it was still a caution. The No. 3 never touched the wall!

For years, NASCAR has been quick to throw the caution flag. Give them credit, it’s gotten better over the past year or so, but then some bogus caution flags are thrown, when, coming to two laps to go, Elliott and Logano all but wreck each other and the green flag is still flying.

Post-race, runner-up Clint Bowyer said he was surprised NASCAR didn’t throw it, but labeled it was the right call. Whether it was the right call or not, today’s total number of cautions probably should have been 18. Or, if you take three away from 17 and had the one at the end, 15. You decide.

How in the hell was Elliott/Logano not a caution and some of the other "cautions" in this race cautions? So confused. #NASCAR

Regardless, 12 drivers failed to finish the event, the most at Bristol since August 2004.

Daniel Suarez knew 2020 was going to be a challenge, driving for Gaunt Brothers Racing. After all, his first three years in the Cup Series were with two of the sport’s Golaiths: Joe Gibbs Racing and Stewart-Haas Racing.

The season started off with Suarez sidelined in the Great American Race, failing to qualify into the Daytona 500 after crashing out in his Duel race. His season ultimately began at Las Vegas, where the No. 96 car finished 30th. Auto Club Speedway? 30th.

Until Sunday, his best finish of the season came at Phoenix, where he placed 21st. Once NASCAR returned from its 10-week hiatus, Suarez had a quartet of finishes in the mid- to low-20s. But at Bristol, he piloted the No. 96 Toyota to its best career finish on a non-superspeedway track (18th) after being multiple laps down earlier in the race.

The team never gave up. We worked hard and overcame obstacles for a Top 20 result. Thank you for all your support amigos! ??#SuarezNation #DanielsAmigos #DanielsAmigos pic.twitter.com/zdxgJAjg5B

Granted, to a degree Bristol levels out the playing field. When the series heads to Atlanta Motor Speedway next weekend, it’s likely Suarez, again, places in the 20s, if not worse. But for now, he claims the accomplishment of giving Gaunt Brothers its best run on a track outside of Daytona or Talladega Superspeedway.