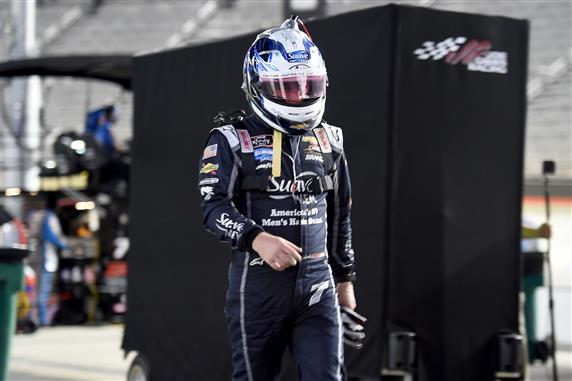 It seemed like Justin Allgaier had Monday night’s NASCAR Xfinity Series race well in hand. That is, until a late-race restart resulted in contact between him and JR Motorsports teammate Noah Gragson.

The bump sent Allgaier’s No. 7 into the wall and to pit road as Gragson held the lead on the following restart and won the race, his second victory of the season.

Justin Allgaier goes around after contact with Noah Gragson racing for the lead in Bristol! pic.twitter.com/qbV91sTgxo

One late-race restart led to another, both teammates on the front row as the field headed back to the green flag. Allgaier and Gragson restarted first and second, respectively, and Allgaier jumped out to a sizable lead, gapping the rest of the field.

Gragson cut the deficit down and closed in on Allgaier’s back bumper, pulling alongside the No. 7 with five laps to go. Side-by-side into turn 1, Gragson’s car came up in the bottom lane and slammed into Allgaier, sending the series veteran up the racetrack and into a spin once his car slid out of the groove.

Allgaier’s car came to rest against the inside wall, the driver limping the damaged machine to pit road. The 11-time winner in the series climbed out of his car and returned to his motorhome, finishing 18th.

The incident was reminiscent of the NASCAR Gander RV & Outdoors Truck Series’ race at Canadian Tire Motorsports Park in 2018, also involving Gragson. Trailing Kyle Busch Motorsports teammate Todd Gilliland on the final lap, Gragson dive-bombed his truck into the last corner and made contact with Gilliland, spinning both of them out. Justin Haley dodged the sliding trucks and squeaked through to score the win.

“Yeah, I really apologize to Justin and the [No.] 7 team,” Gragson said in his post-race interview. “That’s not how I want to race, but I saw the position open up – he kind of slipped off the bottom the lap before and then I tried to get to the bottom and I just got too loose. All of us top five guys, really everybody in the field, this track’s like ice out there right now. We were slipping and sliding, but what a heck of a night for this No. 9 team.

“This car was fast,” Gragson added. “I’m worn out… it’s Bristol, baby! This is incredible… a once in a lifetime opportunity. I sucked here, I was terrible here in trucks, in Xfinity last year and then my crew chief believed in me and he wanted me to come back and run with them – [crew chief] Dave Elenz is the man.”

“There’s a lot bigger stuff going on in this world,” Allgaier told the Performance Racing Network after the race. “My heart is heavy… I’ve prayed a lot, with the death of George Floyd and the unrest. A lot has to change in our society.”

Allgaier: "There's a lot bigger stuff going on in this world. My heart is heavy…I've prayed a lot, with the death of George Floyd and the unrest. A lot has to change in our society."

He says he'll rebound and get them next week in Atlanta.

Allgaier will indeed be back on track next weekend at Atlanta Motor Speedway. The Xfinity Series field will take the green flag shortly after 4:30 p.m. on Saturday, June 6.