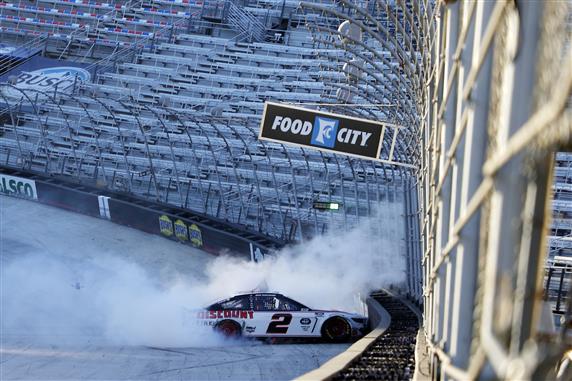 Luck has certainly been on Brad Keselowski’s side lately.  After winning the Coca-Cola 600 a week ago, Keselowski drew the pole and its clean air advantage early on, leading 62 laps in stage one. But he also had a fast car, sticking in the top handful for the first half.  Team Penske showed strength from the drop of the green, so it shouldn’t come as any surprise that Keselowski retook the lead just before the halfway point of stage two. The handling dropped off a bit on long runs, though, and that hurt the No. 2 later in the race.

So what worked? A couple of late cautions and fresh tires when the competition opted for track position. After the final restart with six laps to go, Keselowski was able to get himself positioned to take advantage of any mistake by teammate Joey Logano and Chase Elliott in front of him. When they let aggression get the best of them, Keselowski sailed on by, all the way to the checkered flag, while Clint Bowyer and Jimmie Johnson made it through behind him.

There were certainly some unexpected names in the top 15, and some of them had to overcome damage and mechanical issues to get there. Kurt Busch overcame damage from an early crash.  Bubba Wallace raced his way into the top 10.  And for the first time in 2020, Christopher Bell was the top rookie.  Bell, who has one Bristol win in the Xfinity Series, has struggled at the start of his rookie campaign and tied his career-best finish from the Coca-Cola 600, finishing ninth at Bristol.

While Bell was the top rookie for the first time this year, fellow first-year driver John Hunter Nemechek shone, running in the top 10 for much of the day. He finished 13th after a lengthy pit stop for a spark plug wire dropped him back in the field. For Front Row Motorsports, four top-16 finishes in five races is a very successful stretch, and for it to come from a first-year driver with no practice for any of them is doubly impressive.

The finish sees Nemechek in 21st in driver points, ahead of both Bell and fellow rookie Cole Custer in points and rookie standings, behind only Tyler Reddick for rookie honors. Here’s hoping the current format of little to no practice and qualifying continues, because it’s really agreeing with some smaller teams and bringing parity in a way that works.

Last Thursday’s winner Elliott has not had a problem with speed. He could easily have three or four more wins this year, and he showed it early on, taking the lead on lap 63 and winning the first stage. Elliott won stage two as well and was looking to make it a clean sweep, leading a total of 88 laps. But a tangle with Logano as the pair battled for the lead with four laps to go left Elliott in 22nd at the checkers, and his feast-or-famine season continues.

Active Bristol win leader Kyle Busch was stalking the top five in typical Busch fashion, but a speeding penalty on the second competition caution hampered his effort. He was able to work his way into the top 20 by the end of stage one and from there back into the top five. Busch went on to lead 100 laps before settling in in the top five for the last quarter of the race. He made a run at the lead, but the cautions didn’t fall into place for Busch, and his car tailed off just enough to keep him fourth at the checkers.

Fall Bristol winner Denny Hamlin showed his speed in the early going along with teammate Busch, but overheating was a worry for the No. 11 team late in the first stage of the race. The team got that solved in stage two, and Hamlin marched forward, moving into the top five. He marched all the way to the top spot late in the day, leading a total of 131 laps, the most of any driver. But with just 11 laps to go, battling for the win with Logano, Hamlin got into Logano and spun, relegating the No. 11 to 17th, not an indicator of his day as a whole.

The first short track of the year, completely green, with no track time before the race? It made for an exciting, unpredictable race because it led to overdriving and impatience (not that short tracks don’t do that anyway). It wasn’t complete chaos, and the best teams, as always, made the best of it.

But what fans got was quintessential Bristol. NASCAR made a great call not to throw the caution after the leaders took their cars over the ragged edge, and the result was a memorable, fun finish.  Nobody got taken out; no fights broke out. The top-10 finishers were a mix of names you would expect to see there and some you might not.  It was good.  And a little good distraction right now? It means something.

In many ways, the format NASCAR found itself forced into during the COVID-19 pandemic has been a major improvement. The lack of practice and qualifying has proven not only to not hurt the racing but to actually make it better. Teams without a lot of great equipment are suddenly more equal because everyone only has what they start the race with to work with.  It’s proven to be an equalizer of the best kind.

And without practice, throwing competition cautions early in the race is important. They might not be glamorous, but they’re for the safety of the drivers.  Or at least they should be.

NASCAR had it right in the first race at Darlington: freeze the field before the caution, which gave teams no advantage for staying on track as some did Sunday at Bristol. That should be happening – in fact, stops should be mandatory – along with those laps not counting, which was not part of the Darlington format.

In essence, give teams a chance to give their cars a thorough once-over, check tire wear and make adjustments with no penalty for taking the time to do so, without taking away any actual racing.

NASCAR probably won’t do that, just like we’ll probably see a return to the same old, same old of more practice than teams need at his level leading to less parity, but it should be considered.  The safer the drivers and the better the race, the better off everyone involved is.

How… much does chemistry really matter?

As much as on paper, it should be about making the cars go fast so that the driver can drive them fast, what happens in between is not nearly as simple. The relationships between drivers and crew chiefs and teams are a big part of the picture. Cars weren’t the only reason that Johnson and Chad Knaus or Keselowski and Paul Wolfe were so successful together for so long, and they’re not the only reason that the wins tailed off, either. Both drivers have new crew chiefs this year, Johnson with Cliff Daniels, who came on at midseason last year after a disastrous start with Kevin Meendering, and Keselowski with Jeremy Bullins. Both are having a strong start to the season, with any issues not because of communication or frustration spilling over.

On the other side of the coin, there’s Martin Truex Jr. He’s got some okay finishes with James Small, but he’s struggled in comparison to the last couple of years with Cole Pearn.  In all three cases, the equipment is a constant.  All three drivers are with the same organizations, and while smaller changes are common on race teams, the major difference has been the crew chief.  So, yes, chemistry matters.

Guess what video will be the lead into Sunday`s pre-event crap show…and referred to ad nauseum all week!

I’m all for them continuing to race this way even after the covid 19 crisis passes. No qualifying and practice has actually turned the races into something worth watching again.

It wasn’t classic Bristol – that’s long gone but it was fun to watch. Probably because I no longer have a favorite driver, I can watch and not care how it turns out although I would prefer that it not be KyBu, KuBu, Logano or Hamlin who wins. As far as new drivers, I am keeping an eye on Tyler Reddick and John Hunter Nemechek. They haven’t been racing in Cup long enough to become part of the spoiled brat crowd like Logano, Elliott and Hamlin. Actually you can add Johnson into that group as far as I’m concerned.