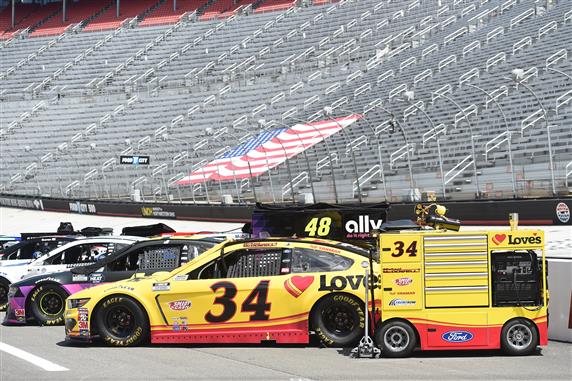 I might have to change the name of this column to The Nemechek House if rookie John Hunter Nemechek keeps up his current streak. Since racing resumed, the Front Row Motorsports driver has been the best in class four times in a five-race span.

But perhaps this shouldn’t come as that much of a surprise. After all, this is the driver who wheeled his family-owned truck to six wins. Austin Dillon, Ty Dillon and Ryan Newman have all raced a NEMCO Motorsports truck but none managed to win in it. The only other driver to manage the feat was Ron Fellows, and he did so when JHN was only two years old.

In Sunday’s Supermarket Heroes 500 at Bristol, Nemechek put on another demonstration of his ability, coming in 13th, one position ahead of his teammate Michael McDowell. At certain tracks, the driver can make more of a difference and is less reliant on the car. Those are the ones, like Darlington and Bristol, where Nemechek seems to stand out.

McDowell landed right behind Nemechek in 14th position at Bristol but that has become rather customary of late, as both appear to comprise the most capable underdog team. However, Daniel Suarez deserves a mention here for his 18th-place finish. The Gaunt Brothers Racing team missed the season opener at Daytona but has been rather solid since, and Suarez deserves a lot of that credit.

Timmy Hill also found himself in the top 20 at the checkered flag, coming home 19th on the concrete half-mile. Hill had a top-10 finish in the Bristol Xfinity race last August, so he clearly has figured out something that helps him get around the high banks.

In the Xfinity Series race at Bristol, Brandon Brown finished seventh, a career best for the Virginia native. Brown continues to contend despite not having any major team affiliation. Also enjoying a strong finish were both Jeremy Clements in eighth and Josh Williams, who came in ninth.

The NASCAR Gander Outdoors Truck Series finally returned to action last week in Charlotte as well. However, none of the underdog players had much to cheer about after the race. Derek Kraus was the highest such finisher in 16th. Sometimes it just isn’t your day, and it wasn’t anyone’s last Tuesday.

It’s finally time to go back to where we left off so to speak. This weekend’s races at Atlanta Motor Speedway were supposed to take place in March and were the first to be postponed when the Coronavirus outbreak began. For the Cup Series, it’s hard to overlook second-generation racer Nemechek, but there’s another underdog who I’ll be watching on Sunday: Brennan Poole. Poole drives for rarely-competitive Premium Motorsports, but has never finished outside the top 15 in anything he’s driven at Atlanta. He came in 24th at Bristol and could be in the running for a similar result this week.

The Xfinity Series will be the second half of a doubleheader on Saturday. Keep your eyes on Chad Finchum. Finchum has not finished lower than 24th this season, and I fully expect him to beat his career-best finish of 14th in the near future. The Carl Long-owned team has been getting much better recently and Finchum could reap the benefits of that improvement.

As for the Truck Series, it might be time for Tate Fogleman to stand out. Fogleman is driving the No. 02 truck that Tyler Dippel finished 11th with last year at Atlanta. Also, Fogleman was 17th at Charlotte in just his sixth career start, and this could be another team that will keep getting better as the year goes on.

19th place finish on the lead lap after 500 grueling laps at Bristol! So proud of our @MBMMotorsports team! Each week I see the improvement & we are just going to continue to make steps forward! Time to go home & cook a nice steak on my @PitBossGrills! pic.twitter.com/uB2chorwsg

P25 for @tbr_racing . We gave up a bunch of laps early, the #7 needed some rubber in the track before it showed signs of life! Lol. On to Atlanta ? Hope everyone is staying safe tonight ? @ Bristol Motor Speedway https://t.co/sjPf03xuKG

Bubba Wallace finished 10th… RPM used to be featured in the column and still should be considering its a single car team..