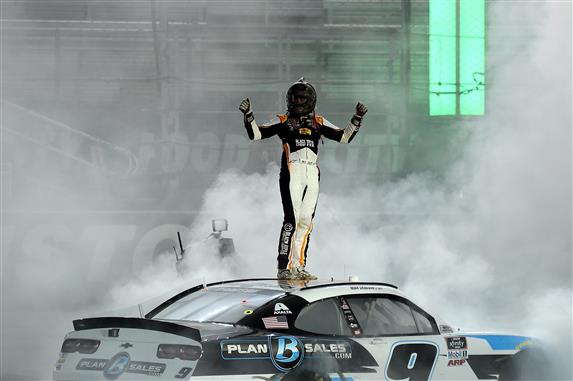 Once again, it’s Bristol baby. After the NASCAR Cup Series had their own thrill show at the end of yesterday’s Supermarket Heroes 500 at Bristol Motor Speedway, with Brad Keselowski stealing the win away on the final restart, the thrill show returned to kick off the month of June with the running of the Cheddar’s 300 Presented by Alsco.

Like the last two races on the Xfinity Series’ calendar, practice and qualifying were left absent from the schedule. To not have either at a track like Bristol brings forth a much larger obstacle for the field to overcome. Thankfully for Noah Gragson, these factors proved to be the least of his concerns.

We miss you at the track, NASCAR fans. @NoahGragson climbs the fence to celebrate his Bristol win. pic.twitter.com/jxiwotS2ue

Gragson took home his second career win, also his second of the 2020 season. Gragson won the first stage, and his No. 9 Chevrolet Camaro was out in front for 55 total laps throughout the race. However, his JR Motorsports teammate Justin Allgaier assumed control for much longer, leading 156 laps and winning stage two. Allgaier looked to end his recent misfortunes at Bristol with a win, but with four laps to go, Gragson slipped up underneath Allgaier’s No. 7 Chevrolet Camaro in turns 1 and 2. Allgaier did all he could to save it, but his car would soon spin and crash into the inside backstretch wall.

Justin Allgaier goes around after contact with Noah Gragson racing for the lead in Bristol! pic.twitter.com/qbV91sTgxo

Gragson shook off the guilt, and was then able to fend off Chase Briscoe on the overtime restart for the win.

Briscoe, Brandon Jones, Harrison Burton, and Myatt Snider completed the top five. By finishing in the top four positions, Gragson, Briscoe, Jones and Burton are all eligible to compete for the $100,000 Xfinity Series Dash 4 Cash prize at Atlanta Motor Speedway.

Lots of smashing and crashing, big names falling out of the race, smaller names rising to the occasion and close-quarter racing for the win all summarize Bristol just being Bristol. Two consecutive days, two great products of racing. The half-mile Tennessee short track proved yet again why it is one of the more popular ones on the calendar amongst fans. Even though their presence may have been missing inside the gates, what we’ve seen here tonight and yesterday only makes the anticipation that much greater for fans when the September race weekend comes around.

Austin Cindric and Ross Chastain were two names that seemed likely to be threats for the win. The two finished second and fourth respectively last week at Charlotte Motor Speedway. However, just six laps into the race, the two were battling for a top-10 position when Chastain’s No. 10 Chevrolet Camaro lost control underneath Cindric’s No. 22 Ford Mustang coming through turns 3 and 4, sending both cars around and taking Michael Annett with them. Chastain limped home to finish 28th, while Cindric and Annett’s days were over. They will each look forward to regaining lost momentum when the series heads to Atlanta Motor Speedway.

It’s the same old song and dance for Allgaier at BMS. For the third consecutive race at the track, Allgaier was stung by late-race misfortune. In both 2019 races, Allgaier led over 130 laps before suffering late-race troubles which ended his bids for victory. Tonight it looked as if fate would change for him at last. But after contact from Gragson with four laps to go, Allgaier instead has to settle for an 18th-place finish and a dejected walk out of the speedway as his teammate celebrated his victory on the frontstretch.

Any driver making their series debut has goals of having a clean race and coming home with a respectable finish. Unfortunately for Patrick Emerling, those ambitions were taken away in a hard crash on lap 141. Emerling, a 2017 winner at BMS on the NASCAR Whelen Modified Tour, was running on the lead lap in 21st before getting turned by Matt Mills down the back straightaway in rather questionable fashion, nosing his No. 02 Chevrolet Camaro into the inside wall and suffering heavy damage. He may have finished 29th, and he may not have gotten as much seat time as desired, but the end result was no indicator of how smooth the Orchard Park, N.Y. driver was running beforehand.

Several drivers took advantage of other drivers falling victim to Bristol’s rough nature, and came away with some solid finishes. Rookie Snider scored his first career top-five finish in fifth. Brandon Brown clicked off his second-straight top-10 finish in seventh. Jeremy Clements rides on a wave of good luck to finish eighth. And Josh Williams scored his second career top-10 finish and first on a non-superspeedway track, finishing ninth.

Aside from Emerling, the other series debutant in the race was Carson Ware, who was able to cleanly bring his No. 07 Chevrolet Camaro home to a 22nd-place finish, 14 laps down.

“I really apologize to Justin Allgaier, that’s not how I want to race. I tried to get to the bottom and I just got too loose… this track’s like ice out there right now. I’m worn out!” – Noah Gragson

“The team did a great job getting us track position we needed… I’m more mad at myself for making a mistake and getting off the bottom, but yeah, we got wrecked.” – Justin Allgaier

Up Next: The Xfinity Series will traverse down to the 1.5-mile Atlanta Motor Speedway in Hampton, Ga. for the running of the EchoPark 250 on Saturday, June 6. Green flag is scheduled for 4:30 p.m. ET and will be televised on FOX Sports 1.