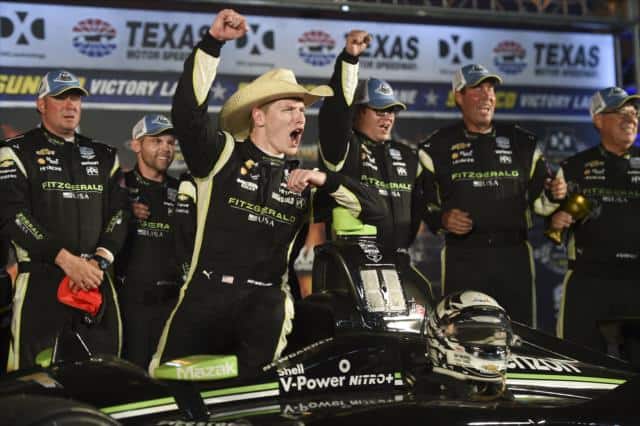 It’s finally time for the 2020 NTT IndyCar Series season to get underway, starting with the Genesys 300 at Texas Motor Speedway on Saturday, June 6 at 8 p.m. ET on NBC.

There are 26 cars entered for the race, meaning all will race, barring any entry list changes.

Team Penske’s Josef Newgarden looks to defend his 2019 Texas victory as well as the championship title in the No. 1 car.

Marcus Ericsson is set to make his first start for Chip Ganassi Racing in the No. 8 Honda after competing for Arrow McLaren SP last year.

Tony Kanaan will compete in the No. 14 Chevrolet of A.J. Foyt Racing in his final IndyCar season.

Conor Daly is making his first start of the season in Carlin’s No. 59 car.

Pato O’Ward and rookie Oliver Askew make their debuts for Arrow in the Nos. 5 and 7 cars, respectively. O’Ward competed part time for Carlin in 2019; both had successful stints in the Indy Lights Series.

Fellow rookies Rinus VeeKay and Alex Palou are set to race their first oval. VeeKay is in the No. 21 car for Ed Carpenter Racing, while Palou will pilot the No. 55 Honda for Dale Coyne Racing with Team Goh.

I always find it weird that legitimate racing drivers and team personnel can’t get in this country, but terrorists and illegal immigrants can.
I don’t like Indy Cars on that Texas track. It is way too dangerous. Bring back Milwaukee or Loudon.