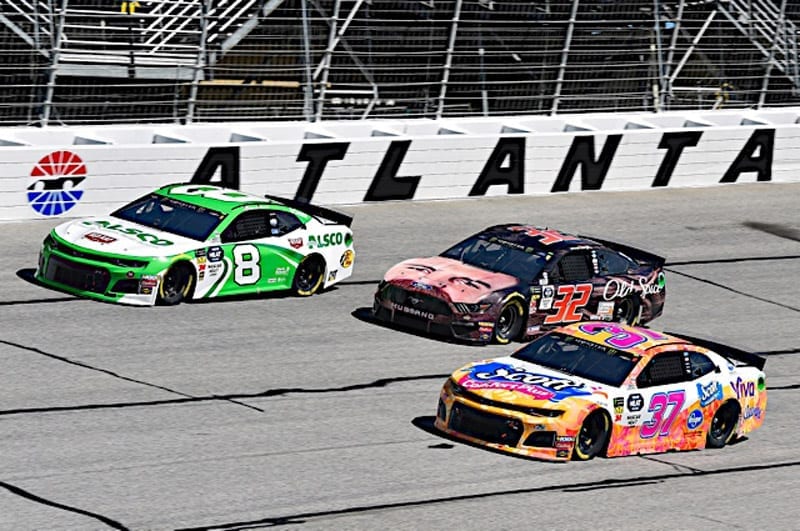 What will NASCAR need to do following July to stay-on-pace to make the playoffs work?

On Thursday, June 4, NASCAR revealed its current schedule through the end of July and the first weekend in August.

These are not the only dates NASCAR is looking at potentially running that month.

Eldora’s Roger Slack on the truck race that is scheduled for July 30 (nascar has yet said whether it will be postponed or run as scheduled): ⁦@NASCARONFOX⁩ pic.twitter.com/mOeQ4SXI6f

NASCAR has made it clear its main goal this year following its return from COVID-19 would be to keep the playoff schedule intact. With that in mind, here is the breakdown for the three national touring series with this block of dates being announced:

The NASCAR Cup Series was originally scheduled to have held 22 races by Aug. 2, which was going to be its final off-week. Aug. 2 will now be the date of the 20th race on the schedule, meaning the series will need to make up two additional dates this year. The obvious answer to this, of course, is the Michigan International Speedway and Dover International Speedway spring dates that were postponed and have not been rescheduled yet. Having those two races on doubleheader weekends in August would be keep Cup right on schedule.

The NASCAR Xfinity Series was originally scheduled to have held its 20th race of the season on Aug. 1. It will now have ran 17 races by that date. No make-up date has been announced for Mid-Ohio Sports Car Course, and both it and Road America in August would be hard to run this year without fans. The NXS playoffs are scheduled to start after the Sept. 11 race at Richmond Raceway, which would give NXS six weeks to make up three races, either through doubleheader weekends or by mid-week races.

The NASCAR Gander Outdoor Truck Series was originally scheduled to have ran its 15th race of the season on July 30 at Eldora Speedway. It will now have run either 10 or 11 races by that date, depending on if Eldora is run. The Truck playoffs are planned to start on Aug. 17 at WWT Raceway at Gateway, the 17th race on the original calendar and a race that is also in danger as a standalone date on the calendar.

It’s hard to imagine Trucks could run five to six races in 15 days. Thankfully, if Trucks were to either scrap, move or be willing to make Gateway and Canadian Tire Motorsport Park non-playoff races, and run the Michigan date as scheduled on Aug. 8, that would give the series five weeks run five to six races on the schedule, which would be more than doable as long as NASCAR would be open to running a doubleheader in that time frame. It would require some changes to the first round of the playoffs, but that really isn’t the worst thing in the world considering the circumstances of coronavirus.

The return of Nashville… Superspeedway?

Turns out the Dover summer/fall race is being moved to Nashville. Surprisingly, it will not be the legendary Fairgrounds, a track that has long been rumored to be rejoining at least one of the three national touring series in the future.

Instead, the racetrack will actually be Nashville Superspeedway, a track that held its final race in 2011 in the NASCAR Xfinity Series. This mile-and-a-third oval has a unique shape and will be just the third track on the current Cup schedule with an entirely concrete surface, joining Dover and Bristol Motor Speedway.

There really wasn’t much excitement at the track, comparatively speaking, during its 11 years on the NXS and Truck circuits. There have been plenty in the industry showing their displeasure at the move and crying for the Fairgrounds. The reality is that this is not in place of the Fairgrounds; if that race becomes a reality, Nashville is a big enough market to have a race weekend at two different tracks. No, this is in place of a race at Dover, which has not been very exciting in recent years. At least Nashville provides some variety on the schedule and a new market NASCAR can stake a claim in without having to wait on the city and the Fairgrounds.

What will be the fallout from Bristol?

The two NASCAR races from Bristol this past week, Cup on Sunday and NXS on Monday, had two major late-race incidents.

In Cup, Chase Elliott divebombed Joey Logano into turn 3 and couldn’t keep the car in line, resulting in both cars getting into the wall. Neither playoff-bound driver won the race. It led to a brief confrontation between the two on pit road afterward.

On Monday, Noah Gragson pulled a somewhat similar move on Justin Allgaier. The key differences are that it was a bit more blatant, it brought out a caution, both drivers are teammates, and Gragson was able to hang on and win the race.

For both incidents, it’s just really dumb to make a move like that outside of the final lap. Even if second ends up the leader like happened with Gragson, there’s still a great chance that they cause a caution and have to survive another restart.

In Elliott-Logano, it’s funny how Logano reacts when people race him in the same aggressive style that he uses. A bunch of people legitimately thought the two would start trading blows, but it was never really in the cards; Logano doesn’t start fights, and Elliott caused it, so he wasn’t going to start something there.

Gragson-Allgaier is much more muddied. Some have argued Gragson shouldn’t have been that aggressive with a teammate who has not won a race and guaranteed themselves a playoff position yet. The reality is that, with so few well-funded teams on the NXS grid, if Allgaier cannot make it into a 12-car field because of this wreck, he really doesn’t deserve to be in the playoffs.

No, the bigger thing is that because of this wreck, JR Motorsports now only has one car eligible for the Dash 4 Cash bonus this weekend. Nobody can be blamed for moving somebody out of the way on the last lap at a short track like Bristol, it’s the name of the game. But to do it to a teammate prior to the last lap and knocking them out of the chance to win $100,000? That’s a lot of money to potentially flush down the drain.

Who can prevail at Atlanta Motor Speedway?

This is a fun weekend every year. The idea of doing a Truck and an NXS race on the same day at the same track is fairly rare outside of Atlanta (in a normal world, of course) every year, and it’s a great value for race fans.

Atlanta itself is great. The track can still produce fast enough speeds to encourage passing, but the old pavement chews tires and with it being June and in Georgia, it’s going to be even worse with how hot the track is going to be both Saturday and Sunday.

After Kyle Busch (probably) wins the Truck race, NXS will hold its first Dash 4 Cash race of the season. The rules are simple: whomever finishes highest between Gragson, Brandon Jones, Harrison Burton and Chase Briscoe will win $100,000. The top four finishers of this race will then be eligible for the prize next week at Homestead. Gragson will have the upper hand after winning the pole via modified draw, but it would be really tough to count out Briscoe with just how good the points leader has been this season.

Sunday’s Cup race is one of the longest of the year, and with how bad it’s going to be under that Georgia summer sun, whoever ends up winning this 500-mile race is really going to deserve it. Brad Keselowski will be looking to make it three Sunday wins in a row, and Keselowski has had a lot of recent success at Atlanta. It would not be surprising at all if the 2012 champion can pull off the hat trick.

Yawn…Yawn. Clye sucked, I swear he though the 22 was a bottle of mom’s milk the way he was trying to get at it. Sorry, bad driving. Logano was not wrong in voicing his displeasure.