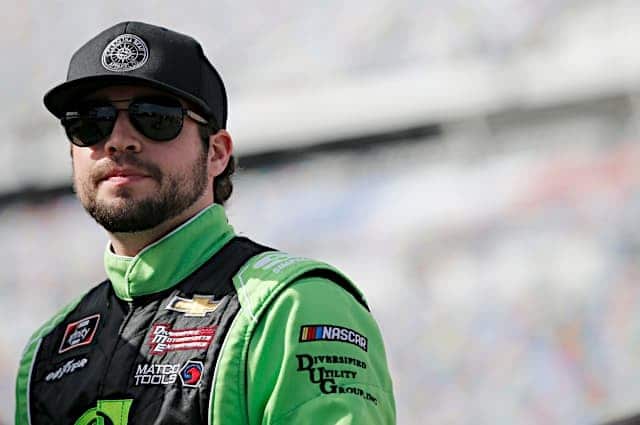 Prior to the 2020 NASCAR season opening weekend at Daytona International Speedway, Jesse Little had never turned a lap in the NASCAR Xfinity Series. But that didn’t change his mindset.

Little, 23, has been on the grind to make it to Xfinity for years. He recalls racing at Hickory Motor Speedway in late models before making the commitment to climb up the national touring ladder. In 2012, he ran seven races in the K&N Pro Series East division, scoring two top-five finishes. In 2013, he ran the full season for Team Little Racing, earning a best finish of third at Langley Speedway. Come 2014, the North Carolina native scored his first K&N victory at New Hampshire Motor Speedway, passing Nick Drake on the final lap. He finished sixth in the championship standings.

In 2015, Little dipped his toes into the Gander Outdoors & RV Truck Series for his family team. Between 2015 and 2019, he earned a best finish of sixth at Iowa Speedway in 31 starts, almost always outrunning his equipment. However, he’d never competed in more than nine races in one series during the same season.

Fast forward to 2020: Little is in the midst of his first full-time season at the national touring level for JD Motorsports. From the outside looking in, it’s a perfect fit, as both sides are known for overachieving.

When the opportunity was there for Little to run for JDM, it was a no-brainer. Take the deal.

“At the end of summer, early fall [2019], I just began to figure out what exactly I would like to do. I was open for anything,” Little recently recalled to Frontstretch.

“At the end of September, beginning of October, Johnny [Davis, team owner of JD Motorsports] and I began to get really serious about it. He was in a position where it made sense for him, and it 100% made sense for me. An Xfinity program like that, where they’ve proven themselves before, and I can really prove myself at a team like that.”

Prior to racing for JDM, Little admits he didn’t have much of a relationship with Davis. But from their first meeting together, he could tell Davis was old-school, admitting he “respects the hell out of that.”

Though Little’s name has been thrown around the garage –⁠ even getting two Cup Series starts in 2018 for Premium Motorsports and Gaunt Brothers Racing –⁠ he’s had to fight and claw for every opportunity. Quite simply, he wouldn’t want it any other way. Because of that, he feels he has a lot to prove and was ready for the opportunity to run full-time in Xfinity.

“I think my maturity and the way that I approach races suits me well for a position like that,” Little said. “What I like about the program with Johnny and the potential there is, we understand where, how and who we’re racing with each weekend, and the ability to deviate from that is completely in our hands. That’s why I feel like I’m ready: I know my ability is there driver-wise. My mental focus is there for the strenuous season that I’ve never experienced.

“I’m still fairly young, but I’ve been doing it long enough and staying relevant long enough that I feel comfortable saying that I’m ready to be competitive at this level.”

JDM is a team with something to prove, working on a limited budget. But Little believes the opportunity is there for him to take the team to the next level.

“The potential is there and I was really drawn to that,” Little added. “The way they race: They’re hardcore, old-school, and that’s kind of how I did it [in the past]. Everyone pulls their own weight, and you race smart, which is the way I grew up doing it. Don’t take any chances.

“I really appreciate that type of philosophy that Johnny bestowed. It was a good fit, and once we started hammering out the details I knew this was going to be great for me. I couldn’t have asked for anything better. The team, the experience, the guys I have around me and the guys that transitioning to the driver side that have come through there, it couldn’t be a better mold for me to follow with Landon [Cassill], Ryan Preece and of course Ross Chastain. It was a win-win for both.”

Over the years, JDM has become a place where drivers outrun the equipment, propelling them to their next opportunity. Cassill ran the majority of the races for the team between 2013 and 2015 before jumping to Front Row Motorsports at the Cup level. In 2016, Preece ran the full season, recording just one top-10 finish. The next year, he ran four races with Joe Gibbs Racing, winning at Iowa Speedway. In 15 starts for JGR in 2018, he earned another victory before moving to Cup with JTG-Daugherty Racing last season. Then there’s Chastain, who was a mainstay for the team between 2015 and 2018, though he ran three events for Chip Ganassi Racing in 2018, winning once. Now, he’s competing for Kaulig Racing, but a top prospect for Cup next season.

Little says there’s no reason he couldn’t follow the path of JDM’s past drivers.

“I don’t want people to think it was a bust or that I’m someone to sleep on,” Little said. “I want them to say, ‘Damn, that kid can be the next Ross, Preece or Landon.’ That’s how I’m approaching it.”

In his rookie season, Little has a ton of experience around him. While he’s piloting the No. 4 car, BJ McLeod is the primary driver of the No. 6 car after David Starr was let go during the COVID-19 pandemic. McLeod is coming off an 11th-place finish at Bristol Motor Speedway, tying a career-best result. Jeffrey Earnhardt has 162 starts in the top three divisions, earning a third-place finish last year at Charlotte Motor Speedway for Joe Gibbs Racing. Don’t forget, the team owner has been around NASCAR for nearly 40 years.

Ultimately, Little has, and will continue, to pick the brains of his JDM teammates.

“I plan on wearing them out,” Little said. “It’s actually awesome for me because each one of them brings something different and unique when it comes to leadership qualities or experience that I’m going to take advantage of and wear them out. Hopefully it will only help all of our programs more and get us closer to knocking on the doors of the guys in front of us.”

Through his first seven Xfinity races, Little has an average finish of 22.7, with a best outing of 14th at Las Vegas Motor Speedway.