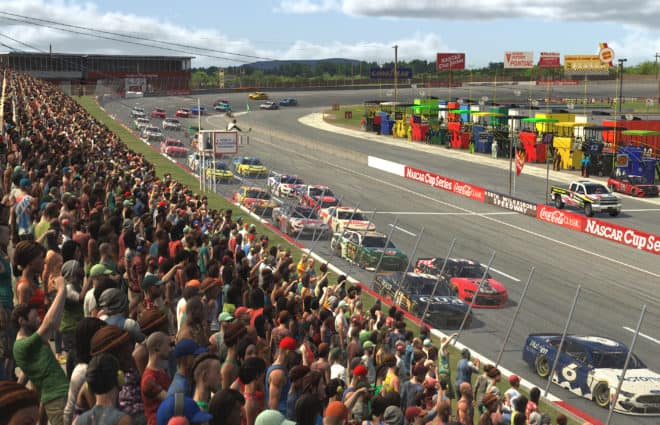 Fire on Fridays: 7 Tracks With Ownership Capable of Cup Dates

Pandora’s box has been opened!

NASCAR announced earlier this week it’s moving one of the NASCAR Cup Series dates from Dover International Speedway to Nashville Superspeedway in 2021. With Nashville’s resurgence after having been abandoned since 2011, it brings to light many other tracks which people have claimed could never host a Cup race.

Many have expressed a desire to see a schedule shakeup in 2021 featuring some new tracks. But I have a hard time believing NASCAR will work with many new track ownership groups, and I expect Cup to not get away entirely from the track companies it has dealt with for the past several decades: SMI, DMI and MattCo Inc. Additionally, NASCAR now owns International Speedway Corporation, and Penske Entertainment Group now owns Indianapolis Motor Speedway, so expect NASCAR to continue relationships with those tracks.

Based on this, here are seven tracks that could be added to Cup by one of those five companies, and one track from another method. I’m not saying any of these will happen; in fact, some shouldn’t. But given that NASCAR just revived Nashville, which had been dead for nine years, truly anything is possible.

This seems like the most logical choice and one that could actually work. South Boston is owned by MattCo, which also owns Pocono Raceway. Pocono is trying out a doubleheader this year to try to save it from losing one of its races. It won’t go over well, so when it doesn’t work, MattCo should move one of the dates to SoBo.

SoBo hosted the Cup Series from 1960-71, the NASCAR Xfinity Series from its inception to 2000 and the Gander RV & Outdoors Truck Series from 2001-03. It continues to be one of the premier weekly short track venues in the country.

Here’s where people usually chime in with, “South Boston doesn’t have the amenities to support Cup.” Neither did Bristol Motor Speedway, Martinsville Speedway or Richmond Raceway until owners put money into them and built them up. Sure, they’ll have to add SAFER barriers, renovate the suites and press box and add additional grandstands. But Nashville is about to have to make many of the same upgrades (it already has SAFER barriers, but it has just been sitting there for nine years and needs maintenance).

One of NASCAR’s biggest problems of the past two decades was it got too big for its britches. A return to SoBo would be a throwback to the series’ roots. Plus, fans have been begging for more short tracks for years, but there hasn’t been one added to the schedule since 1971 (no, Phoenix Raceway is not a short track). If NASCAR wants to try out midweek races again next year, I can’t imagine a better track. It’s just under three hours from Charlotte, and it would likely sell out its 10,000 seats (plus whatever additional seating is added), just like Nashville will likely do with its 25,000-plus.

When NASCAR added Nashville, it opened the floodgate for tracks like this, and SoBo has the ownership to make it happen. At the very least Xfinity or Trucks should race there instead of Pocono.

SMI has put tons of effort recently into getting a Cup race at Nashville Fairgrounds Speedway, a track it doesn’t even own. And every attempt seems to be met with pushback, be it the government, local citizens, etc. Racing there seems to be a pipe dream at this point, and some would also cite a return to North Wilkesboro as one as well. But SMI actually owns North Wilkesboro, so it’s free to do almost whatever it wants with it. The Nashville move makes this one seem much more possible.

A return to Wilkes County, N.C., seems much more feasible than going to the Fairgrounds. The only thing really holding it back is money, but would it cost as much of an astronomical price of the recent renovations to Phoenix and Richmond that did very little to the actual track (granted, both of those tracks are owned by ISC, not SMI)? Plus, the property is just sitting there not earning SMI one cent. What good is that doing the company except for maybe some tax breaks?

North Wilkesboro has had a bit of a revival this year, with Dale Earnhardt Jr. and a team cleaning up the track for iRacing to scan it. If this recent boost doesn’t lead to the track’s resurrection, it will never happen.

Bringing this track back would also give fans a strongly desired new short track. The track was selling out its 60,000 seats when Cup  left. NASCAR would love a crowd like that these days. NASCAR would gain back a lot of favor with fans by moving one of the Vegas or Texas Motor Speedway dates to one of its original tracks.

Are you noticing a common short track theme yet? It’s almost like the Cup Series hasn’t added a short track since 1971. Oh, wait.

Iowa is a fun track that has produced some great racing in Xfinity and Trucks. The biggest problem the track has is that the attendance has been terrible, which is why I put it lower than SoBo and North Wilkesboro. But it might provide the kind of entertainment to get Cup TV ratings up, which is more important than attendance. Plus, a Cup race is always going to draw more of a crowd than Xfinity or Trucks, and the track only has a 30,000-person capacity.

Iowa is owned by NASCAR, and now that NASCAR owns ISC, I imagine a swap between that and an ISC-owned track would be easier. I don’t see Michigan International Speedway keeping two dates, so one should move to Iowa.

NASCAR has been entertaining the idea of having a street course for a few years now, and Roger Penske’s group has put on an IndyCar doubleheader at the Belle Isle Park street course in Detroit for several years. With NASCAR once again having a relationship with Penske as a track owner in addition to a team owner, the pair could collaborate to put on a street race.

Since Penske has experience organizing a street course in Detroit, doing a street course there would make sense. Plus, working with Penske on a Detroit course could also give NASCAR a fair swap if it finally gives up on Indianapolis. Wouldn’t a street race in Motor City be awesome?

The Detroit race is pure speculation, but there have actually been rumblings that NASCAR could try out a street course in Chicago. That could be a good alternative if NASCAR pulls the plug on Chicagoland Speedway, which it now owns. It’d also be smart to try to enlist Penske’s people for that course as well.

don't expect it. Think they would prefer a street course setup in Chicago.

I hate street course racing, as there’s very little passing. But NASCAR and some fans seem to want it, and it would be fun to see how they would look doing it at least once.

In addition to more short tracks, fans also plea for more road courses. Xfinity races at Road America and Mid-Ohio Sports Car Course, but those tracks aren’t owned by any of Cup’s current track owners, so it’s hard to imagine a switch to them. However, NASCAR owns Road Atlanta and Sebring through IMSA, so it wouldn’t be as difficult to swap around dates with current ISC tracks.

The odds of either of these happening seem slim, especially for Road Atlanta, as the city of Atlanta already has one track with a Cup date. But if you had asked me last week what the odds were of Nashville hosting a 2021 Cup date, I would’ve also said they were slim. A race at either track has a lot of potential.

The last track on this list is the least likely to get a Cup date, as it is the only one that NASCAR or one of its current partners doesn’t own. And as long as there is a Cup race at IMS, the odds for this are significantly lower.

But the city of Indianapolis consistently ranks in the top five in NASCAR’s highest TV ratings. If there’s any area outside of the Southeast that should get a second Cup venue, this is it. Or NASCAR could just give the IMS date to LOR since the former does not produce great racing or high attendance.

LOR, formerly known as Indianapolis Raceway Park, was a mainstay on the Xfinity and Truck schedules from both series’ inception until 2011, when once again, NASCAR got too big and moved Xfinity to IMS. We just witnessed one former Xfinity and Truck track rise from the ashes of 2011 to host a Cup race, something it had never done previously. Why couldn’t lightning strike twice?

NHRA currently owns LOR, and maybe it could work out a NASCAR/NHRA doubleheader that would be beneficial to both parties. For example, NASCAR could take a bigger cut of the TV money than it does at most tracks, and in exchange, NHRA would get a higher attendance for the weekend and more national exposure than it regularly gets. Both parties would benefit, but the fans would be the biggest winners, getting another great short track on the schedule.

Michael Massie is a writer for Frontstretch. Massie, a Richmond, Va. native, has been a NASCAR superfan since childhood, when he frequented races at Richmond International Raceway. Massie is a lover of short track racing and travels around to the ones in his region. Outside of motorsports, the Virginia Tech grad can be seen cheering on his beloved Hokies.
@m_massie22
Previous NASCAR 101: Cup’s Best & Worst Since Its Return
Next 4 Burning Questions: Road to the Playoffs