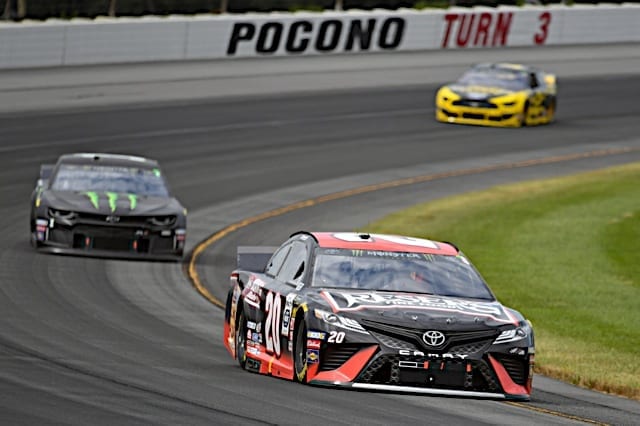 NASCAR released its third portion of the revised schedule on Thursday, June 4, with the rundown revealed through Aug. 2.

Pocono will host its originally scheduled race weekend, but as previously announced, fans will not be in attendance.

Kentucky will host an Xfinity doubleheader. The additional Xfinity Series race date is the race realigned from New Hampshire. The Xfinity Series will race on Thursday and Friday, July 9-10. One of these races is the realigned race from New Hampshire. The Truck Series and Cup Series will then race on Saturday and Sunday, respectively. The track also announced its races will be without spectators in the stands.

Texas will host a doubleheader on Saturday, July 18 with the Truck and Xfinity series. The former is a makeup from the postponed June race that was slated to coincide with the IndyCar season opener. The Cup Series will then race on Sunday, July 19.

Five races will take place over the course of three days at Kansas. On Thursday, July 23, the Cup Series will race in a 400-mile race. The track will serve as the replacement track for Chicagoland Speedway’s ARCA and Truck Series races. The Truck Series and ARCA will race on July 24. To cap off the race weekend, the Xfinity and Truck series will race on July 25. This Xfinity Series race is one of the two realigned races from Iowa Speedway.

Finally, New Hampshire will only host the Cup Series on Sunday, Aug. 2. At this time, the track has stated it is unclear whether fans will be allowed to attend the races.

NBC will start its broadcast of NASCAR with the race weekend at the Brickyard. It will then begin its remaining coverage at Texas as the All-Star Race will be the last broadcast by FOX. All Truck Series races will continue to be broadcast on Fox Sports 1.

Here at Barrett-Jackson we introduce a new category for auction. We present Competition Cautions. We start with one Competition Caution…We have one…do I hear two?… We have two…do I hear three?… Come on folks, it’s a great money maker. Be the first to three! It’s coming. Don’t miss out! Wait for it!

Uugh, The crap portion of the schedule. Not a good track among them.

Duane Troutman
Reply to  Bill B

Bill you need to research a little history. Pocono back in the day was a great track. 50 lead changes a race, two or three a lap. I should know I witnessed them in person. The track is the same shape and blacktop and still in Pennsylvania. The only thing that changed is the cars. They changed into the aero dependent monsters we have now. The cars that can’t race without clean air and then for good measure Nascar slows the cars down. So lay blame for boring racing were it belongs.

I’m not sure I’ll be able to sleep until they reveal the format of the All-Star Race.

Agree with Bill B. At least there’s a few weeks I can plan on doing something else…