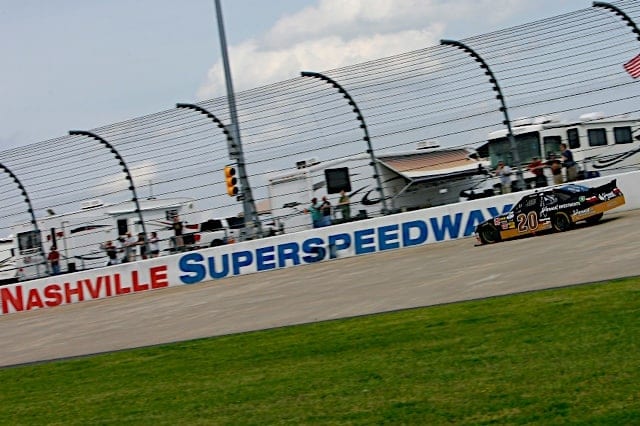 The date was July 23, 2011. Carl Edwards came off of turn 4 for what many assumed would be the final NASCAR-sanctioned event at Nashville Superspeedway. He earned the victory, the 34th win of his Xfinity Series career.

The previous year, in 2010, Nashville was up against Kentucky Speedway for a NASCAR Cup Series event, and in 2011 Kentucky hosted its first Cup event. Following that, Dover Motorsports Inc. decided that it would not renew its sanctions, and the Nashville track lost its dates.

Barricades were set up and security monitored the property, keeping outsiders out. Nissan occupied the track with brand new cars that were awaiting delivery to locations all across the United States.

From Edwards’ win forward, the track has sat abandoned and off the grid. Many at the track were telling outsiders NASCAR would never return to the track. Most recently, Frontstretch was told that very information by officials that occupied the racetrack.

But things changed on June 3, when Nashville’s return was announced. And on the Cup circuit, no less.

Tennessee has been on a rise of late, landing the NFL Draft last year and hosting the Cup awards banquet at the conclusion of last season. Adding NASCAR at Nashville, though not downtown, adds another reason for out-of-staters to come to the surrounding Nashville area and spend money. The GOP has also looked to Nashville for the 2020 Republican National Convention; with the rise in popularity of Nashville, NASCAR and Dover picked the right time to invest in the surrounding area, it’s what everyone else is doing.

Ultimately, the big winner here? Wilson County as a whole. The track won’t only bring fans to the area but will also put the spotlight on Wilson as a destination. Panattoni will enjoy the spotlight its properties near the track will gain and the possibilities of a high-dollar company bringing its business to the area. The announcement corrects previous reports of the entire property being sold to Panattoni, which was one of the big reasons that many believed NASCAR would never return: lack of clarification.

The announcement of Nashville Superspeedway joining the NASCAR Cup Series means that the 2021 Cup schedule could be right around the corner. Memphis International Raceway told Autoweek that it wants back on the Xfinity and Truck series schedule, and the announcement of Nashville could raise the odds of that happening. Some are looking at Iowa Speedway and World Wide Technology Raceway at Gateway to be added to the Cup schedule.

One thing is clear: Nashville may not be the last out-of-the-blue moment of the 2021 schedule release.