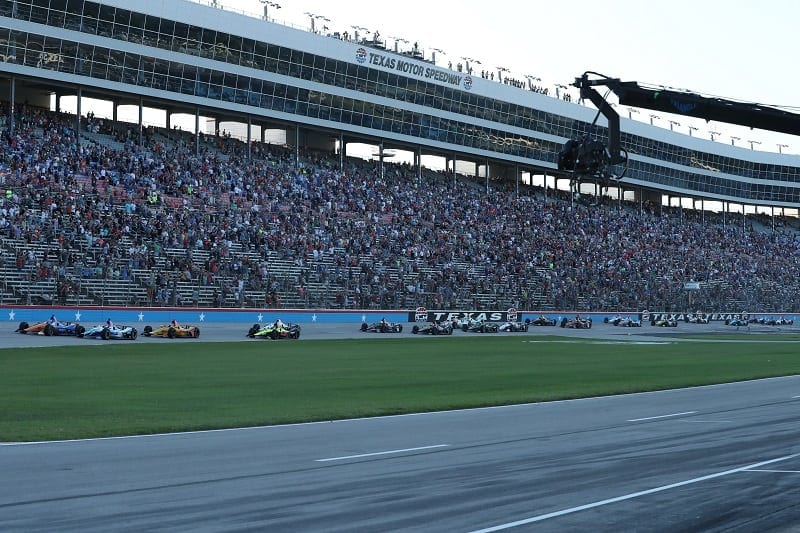 The IndyCar field prepares for the green flag at the 2019 Genesys 300. (Photo Credit: Chris Jones/Courtesy of IndyCar.)

The 2020 Genesys 300 has incredibly high stakes for the NTT IndyCar Series. Not only is the Texas Motor Speedway event the 2020 IndyCar season opener, it’s the first race with the series’ new aeroscreen, and the only race in June. If a team or driver can’t compete here, they’re putting themselves at a swift disadvantage.

But Texas is known for being one of the most intense IndyCar tracks, and there’s no reason to think this year will be any different. This track chews up tires at an alarming rate and has been known to take out just as many cars. Plus, the heat can be downright oppressive. How do all of these variables add up? Look closer at this weekend’s race in our 2020 Genesys 300 preview.

How to watch: The race airs on NBC at 8:00 p.m. ET on Saturday, June 6. Post-race coverage will air on NBCSN at 10:00 p.m. ET. Fans can also stream live timing and scoring through INDYCAR Race Control.

What happened in 2019: Josef Newgarden won the 2019 Genesys 300 on the way to his second Astor Cup. The podium was completed by Alexander Rossi and Graham Rahal. Ryan Hunter-Reay led 90 of 248 laps to finish in the top 5 for the third consecutive race.

What to watch for in 2020: There’s no shortage of storylines to follow during the 2020 Genesys 300 with all of the new elements that have been added to IndyCar this season. One of the biggest challenges for every team will be the addition of the aeroscreen; due to current events, some drivers have yet to test the screen at all. That means their only chance to adjust to it will be in the limited practice time before Saturday’s race.

The event has been shortened from 248 laps to 200 laps. Also new for this year, teams are expected to observe a 35 laps per tire stint limit, as recommended by Firestone. When IndyCar implemented a similar limit in 2017 with the use of competition cautions, it didn’t go over well with teams, so fans should keep an eye on this and see how much it impacts the strategy – and the outcome – in 2020.

The NTT INDYCAR SERIES is back and under the lights at @TXMotorSpeedway this Saturday, June 6 on @NBC at 8PM ET. Tune in to catch the action. #INDYCAR // #Genesys300 pic.twitter.com/sc0K8KpiXd

There are also six former Texas Motor Speedway winners among the field: Ed Carpenter, Scott Dixon, Tony Kanaan, Josef Newgarden, Graham Rahal and Will Power. Of that group, only Dixon has won at Texas more than once (in 2015 and 2018). But the playing field may be incredibly level in the 2020 Genesys 300, because every driver will be dealing with almost three additional months out of the car, the new technology and the new rules implemented due to current events.