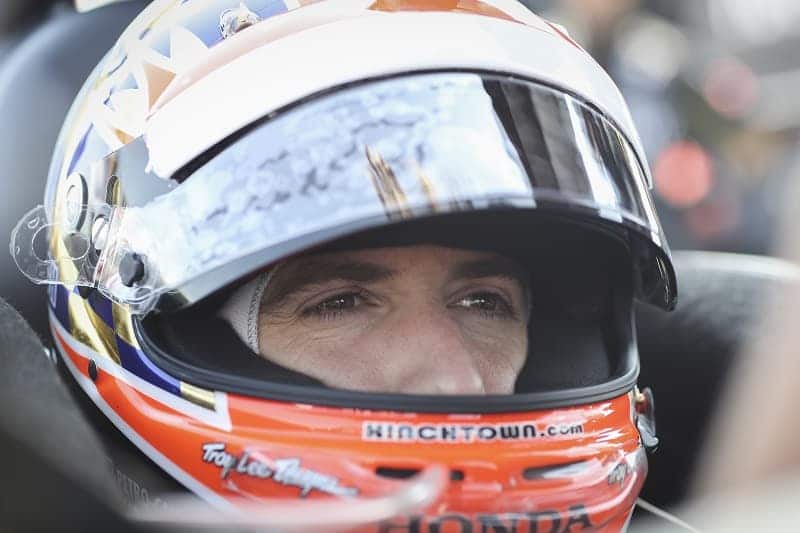 The 2020 Genesys 300 is a major NTT IndyCar Series race for James Hinchcliffe, who is sponsored by Genesys and will carry them on his car at Texas Motor Speedway—but that’s only one reason why.

Saturday is also Hinchcliffe’s first race on a three-race contract he signed with Andretti Autosport since being dropped by Arrow McLaren SP in the offseason. It’s the first time he’s driven for Andretti since 2014, and the first time he hasn’t raced a full season since 2015.

Texas is also the place where in 2016, Hinchcliffe and Graham Rahal had the closest finish in track history with just eight thousandths of a second between them. So to say that a strong performance in the 2020 Genesys 300 would be great for the Canadian fan favorite is probably an understatement.

Hinchcliffe spoke with Frontstretch ahead of the race to discuss returning to IndyCar competition, what concerns him the most about the event’s condensed one-day schedule, and his real feelings about the way things ended with his former team and in the 2016 race.

Frontstretch: IndyCar fans have speculated on what this weekend will be like for the drivers with the extended offseason and then the shortened schedule. Is there anything that concerns you going into the race?

James Hinchcliffe: Certainly there’s a lot of changes with a new team, and I’ve been out of the car a little bit longer than everybody else. While we’re all “unraced” since September, pretty much every other driver was in the car throughout the winter and as recently as the open test at COTA [Circuit of the Americas], where for me the last time I sat in an Indy car was at Laguna Seca [in the 2019 IndyCar season finale].

The biggest concern for me is just getting up to speed. We’ve got a very narrow window in practice to do that. There’s a lot to accomplish in just an hour and a half with two sets of tires, while all trying to learn a new way of doing things, new procedures and protocols, working with a new engineer. It’s a lot to take on in one go in a short period, but luckily it’s a team that I have worked with before. A lot of the people I know, and I know that they’re going to support me in the best way possible and prepare me in the best way possible. As much of a challenge as it’s going to be, I’m just excited to get the chance to do it.

FS: Speaking of your team change, your exit from Arrow McLaren SP was the most shocking story of the NTT IndyCar Series offseason. Now that the dust has settled on that, how do you look back at the situation there?

JH: The issue was just the timing of it. By that point of the year, there aren’t a lot of rides available. But luckily we had an incredible partner in Genesys step up to the plate and an incredibly welcoming group at Andretti Autosport to bring me back into the fold. It’s a team I’ve worked with in the past, and so I’m very excited to the opportunity to get back there.

If I’m honest, it was always kind of a career goal to get back. We never wanted to leave in the first place. It was a sponsor issue that took us out of the team back in 2014, and Michael and I always joked about making it work again and getting the band back together one day. When a door closes, a window opens, and this was a hell of a window to open for us.

FS: Texas was the site of one of your most incredible finishes in 2016. You missed out on your first career win there by the narrowest margin in track history. In retrospect, do you look at that race any differently?

JH: It didn’t take me four years to appreciate how good of a race it was. That was an incredible bout there with Graham and Tony [Kanaan] and Simon [Pagenaud] and everybody involved. I’ve watched that race back 100 times, as you can imagine, that sort of last 10 laps there.

There are a lot of races in my life that I lose sleep over because I could have done something different and maybe altered the results. Every time I’ve watched that one back, I look and say there was absolutely nothing I could have done differently. We by far were the most dominant car. If that race was one lap longer or one lap shorter, we would have won. If we hadn’t had one of the plethora of yellows at the end, we would have won.

But at the end of the day, the way things unfolded—and I won’t get into all the mechanics of it without the video in front [of me]—there’s quite literally nothing from my seat I could have done differently to have altered the outcome of that. It’s a tough one to swallow in some ways, but I don’t lose any sleep over it, because I know that I had done everything that I could.

FS: You have a three-race deal with Andretti Autosport. Is there any chance that you could be able to make additional events in the 2020 IndyCar season?

JH: I think with the economy in the position that it’s in, going around and asking for money doesn’t make me the most popular person in the room. But that said, it’s a very unique situation. It’s not like what happened in 2008. There are certain industries and certain sectors that are booming right now; it’s not quite as blanketed a loss for everyone.

So for sure, there’s some reason to be optimistic. There might be some opportunity there to explore with some of these industries and some of these companies that are actually finding themselves in the catbird seat with what’s going on.