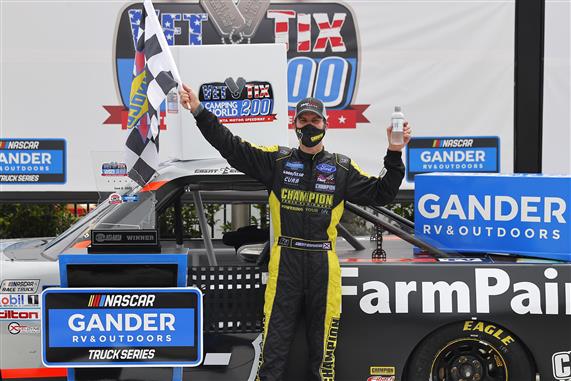 The NASCAR Gander RV & Outdoors Truck Series’ second race back after the season halted in the wake of the coronavirus pandemic was also just the second race won by a series regular. Enfinger won the 2020 opener at Daytona in dramatic fashion, but that was followed by Kyle Busch‘s victory at Las Vegas and Chase Elliott‘s triumph at Charlotte.

Atlanta was scheduled to be the Truck Series’ third race of the season on March 14. That weekend was the first to be put on hold due to the pandemic, hence the Vet Tix Camping World 200 happening almost three months later.

After a pair of early cautions involving the No. 28 of Bryan Dauzat, Busch fell back on the restart before regaining the lead. Busch won the opening stage, the remainder of which was relatively uneventful aside from a fox running across the track.

With Busch mired in the field after stage-ending pit stops, Elliott grabbed the top spot in the Vet Tix Camping World 200 as the No. 51 grew bigger in his mirror. The two battled for a number of laps, including Busch making a daring dive on the backstretch to grab the lead, but their duel was ended by an Austin Wayne Self spin at the exit of turn 4 with two trucks narrowly missing the immobile No. 22.

Busch led the field back to green and won the second stage, but again lost the top spot on pit road.

Enfinger saw the lead for the first time on the restart, but held it for just five laps as Ross Chastain‘s No. 42 flashed by. He led for 17 laps before Busch climbed back to the front, and Chastain was the first to come to pit road in the final cycle of green-flag pit stops.

Busch came in several laps later, on the heels of his first big issue in the race—the slow truck of Jordan Anderson, coming down the track after scraping the wall. The obstacle caused Busch to go high, but the No. 51 tagged both the wall and Anderson’s truck. The No. 51 immediately came down pit road for his scheduled stop, but was clearly off the pace when he returned to the track—and was hit with a penalty for speeding on pit road.

Serving his punishment, Busch sped again on pit road and the race was fully out of his hands at that point. The bevy of issues for the day’s dominant truck allowed Austin Hill to take the lead.

Hill hadn’t seen the lead before but had run well all day after starting in fourth. The Georgia native led the ensuing 36 laps, seemingly on his way to grabbing his fifth series win and first in his home state. At one point, he was ahead of second-place Chastain by more than six seconds and third-place Elliott by more than nine.

Those plans went out the window when Elliott, who ran the high line all race, lost it on the backstretch and spun, saving his truck but bringing out the caution flag.

With the entire field pitting, Hill retained the lead with Todd Gilliland starting on the outside of the No. 16 in second. Gilliland spun his tires on the restart, allowing Hill to stay in front, but Enfinger closed in and pulled alongside the Hattori Racing truck.

Enfinger and Hill raced side-by-side for about a lap, clearing Hill in the middle of the final lap’s first two turns. Hill and Eckes stayed right behind the No. 98 on the backstretch, but neither were able to get a run and Enfinger held the lead all the way to the checkered flag.

“First of all…this race was won at the shop,” Enfinger said after the race. “We didn’t have the best truck on the long run, but we had the best truck on the short run, I feel like…Just an incredible turn of events there on the restart, able to nail the gears right there, something that we’ve been intermittent with. But we had the drive built into the truck; we had the short run speed and that’s what it came down to at the end.

“That was fun,” he said of taking the lead on the last restart. “Duke and Rhonda Thorson kept everything going, kept everybody employed with a paycheck going through this pandemic, to hopefully put ourselves in a good position when we went back racing.”

“All day on the restarts it took our truck about five to seven laps to get going,” Hill said in his post-race interview. “There at the end, on that white flag lap going into turn 1 beside the 98, I drove in there deeper than I had all day – it got on the splitter a little bit, when it did it I just got tight and I had to lift a little bit.

“I’ll take the blame on that one for not getting the win,” Hill added. “We had a dominating truck there at the end. We were just as good as the 51 and stuff before he had his issues…we’re gonna be good at Homestead.”

The Gander RV & Outdoors Truck Series will indeed return at Homestead-Miami Speedway next weekend. The as yet untitled 201-mile race will get underway shortly after 12:30 p.m. on Saturday, June 13; Hill is the defending winner.