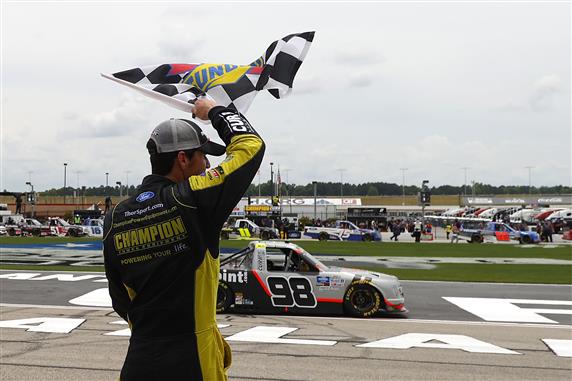 In a Nutshell: Grant Enfinger scored his second victory in four races when he took the checkered flag 0.215 seconds ahead of Austin Hill Saturday afternoon (June 6) at Atlanta Motor Speedway. A lap 129 caution for Chase Elliott spinning erased a more than four-second lead Hill had built over the field and set up the overtime finish. Enfinger got a strong restart, which set up the pass and the win.

Rookie Christian Eckes, who sat on the pole, ended up third, followed by Todd Gilliland. Rookie Zane Smith rounded out the top five with his third straight top 10.

When post-race inspection finished, Enfinger’s victory was confirmed, but Johnny Sauter’s 17th-place run was disqualified. The No. 13 Ford was found in violation of Section 20.16.2.f of the 2020 NASCAR Rule Book with unapproved modifications to its tires.

NASCAR did not specify exactly what the issue was with the tire.

Truck director Brad Moran says they impound tires during the race said the Sauter team had an issue with one of the tires.

The disqualification dropped Sauter to a 40th-place finish. He also lost six spots in the point standings and is now eighth. He will not face further penalties.

No further penalties for Sauter, just the DQ. The tire failed the “dunk tank” test that checks for modifications. They chose one team from each manufacturer to take the tires. Took them from last stage.

In addition to Sauter’s issue, Eckes’ No. 18 Toyota and Timmy Hill’s No. 56 Chevrolet were each found with one loose lugnut.

After drawing the pole for Atlanta, Eckes led the field to the green flag alongside Tyler Ankrum. Despite both drivers making their first laps on the mile-and-a-half oval when the green flag flew, the pair made a clean start.

Eckes held onto the top spot for 11 laps before giving it up to Kyle Busch. Eckes took it back on the restart on lap 16 before once again relinquishing it to Busch. And though he never sniffed the lead again, the driver of the No. 18 Toyota raced inside the top five and top 10 for much of the day before settling in for a third-place finish.

“We were really fast on short runs,” Eckes said after the race. “I felt like we could run with the best of them for about three or four laps, and then for whatever reason, we just weren’t good past that. Finally, this is a result we can build on – the 22nd, 23rd and 14th place finishes to start the year definitely hurt, but we finally got it turned around a little bit, and we can build on it. Hopefully, be two spots better at Homestead.”

For the No. 18 team, it’s a much-needed turnaround for a 2020 season that hadn’t started off well at all. A 22nd-place finish in the season-opener at Daytona International Speedway led to a 23rd-place run at Las Vegas Motor Speedway before the series took its hiatus in the wake of the COVID-19 pandemic. A 14th-place run at Charlotte Motor Speedway was a step in the right direction for Eckes but not the kind the team was looking for.

“We kind of had a ‘coming to Jesus’ moment in the conference room this past week just trying to figure out what we could do better,” Eckes explained. “I feel like we’ve done that and we can finally start trending some finishes together. It will be big for momentum, and that’s definitely what this sport it all about. To finish third means a lot, and it’s definitely a lot harder with a 40-car field now. Third would probably be fifth or sixth in a normal race. I’m really happy to finish here and just looking forward to the next race.”

The career-best run matches a pair of third-place finishes at Las Vegas and Homestead-Miami Speedway last season. He currently sits sixth in the driver standings after four races this season.

.@KyleBusch's streak of 11 consecutive top-two finishes is over.

A lot of y’all have been asking about the bounty money and what I decided to do with it, so here’s where we landed: @KevinHarvick 50k – Feed the Children Covid 19 response. @marcuslemonis and @CampingWorld 50k – 25k to the Res Cross AND 25k to @KyleBusch Foundation.

Finally a good result for the @safelite @KBMteam. P3 at the end. Fought hard, lots of positives. Still some improvement to be done but closer. Ready for Homestead!

Up and down day. Scored some stage points, got a speeding penalty which hurt our strategy battled hard back to the front had a outside lane restart and salvaged a 5th place finish. Happy to end on a good note! Thanks @GMSRacingLLC @Lapazproducts @TeamChevy #VetTixCampingWorld200

We were on the struggle bus today. Felt like we just missed it on the balance and never got it to what we needed. I have no idea how we finished 11th but we’ll take it and move on to homestead. Proud of everyone @DGR_Crosley

Ended p26. Got up to 13th and just made a wrong adjustment on pit road. We’ll rebound stronger for homestead with our notes. Gotta thank my guys for working hard along side eachother and only wanting to improve our program.

Points Update: Austin Hill maintains his spot atop the standings by a 21-point margin over Zane Smith, who moved up one position. Grant Enfinger’s victory propelled him up four spots to third. Brett Moffitt and Ben Rhodes round out the top five. Christian Eckes moves up two spots to sixth, followed by Sheldon Creed. Johnny Sauter’s disqualification dropped him six positions to eighth. Derek Kraus and Todd Gilliland, both up three spots this week, round out the top 10.

My @Hattori_Racing guys are the best there is. They gave me a winning @ToyotaRacing Tundra and I wasn’t able to close it out on the GWC. Our time is coming we just gotta keep diggin. Bring on @HomesteadMiami #teamtoyota

Dang P4! Solid race put together by the whole team. Super proud of everyone. Restarted frontrow on a GWC couldn’t get it done. Thank you @ManningtonUSA @FordPerformance @Team_FRM can’t wait to get to @HomesteadMiami

Tough day… TV never said but we had a RF tire go down at the end after earlier contact with another truck. Tore the radiator surge tank off and was dumping all the water out. Ready to put today behind us and move on to the next one.

Up Next: The Truck Series heads to Homestead-Miami Speedway next Saturday evening, June 13, for the Baptist Health 200. Coverage begins at 7:30 p.m. ET on FOX Sports 1; the race can also be heard on your local MRN affiliate or SiriusXM NASCAR Channel 90.