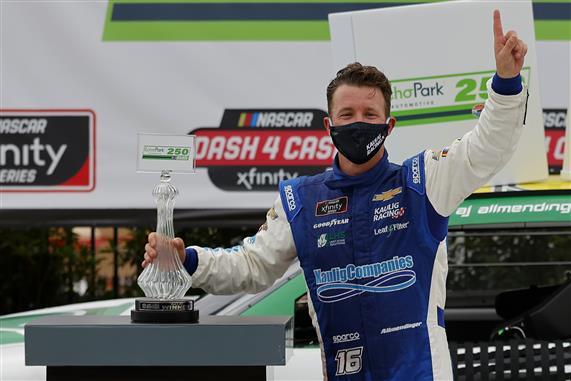 It took from the blooming of his NASCAR career in 2006 to June 2013 for AJ Allmendinger to pick up his first NASCAR win, winning on the road course of Road America in Wisconsin. But it would take from then until Saturday afternoon (June 6) at Atlanta Motor Speedway, for him to finally triumph on an oval track in NASCAR.

The victory is Allmendinger’s fourth in 18 career NASCAR Xfinity Series starts. He led the final 37 laps of the race and held off Noah Gragson by 1.8 seconds at the line to accomplish the Atlanta win. Prior to Saturday, Allmendinger had competed in only one Xfinity Series race since last September, which was on Monday at Bristol Motor Speedway.

At Atlanta on Saturday, he flew relatively low under the radar for the first two-thirds of the race. But after Vinnie Miller’s spin brought out a late caution, Allmendinger found himself in the lead for the restart on lap 127, a lead he would never relinquish. Gragson would shrink the on-track deficit a few times as Allmendinger encountered lapped traffic, but it would ultimately not be enough to take the victory away from the 38-year-old Californian.

Gragson’s second place was enough to scored him $100,000, as he was the highest finishing Dash 4 Cash competitor. Justin Haley came back from two pit road penalties to take third, while Daniel Hemric and Harrison Burton completed the rest of the top-five finishers. Allmendinger, Gragson, Haley and Hemric will be the four eligible drivers to compete for the Dash 4 Cash prize at Homstead-Miami Speedway on June 13.

A much-jubilated Allmendinger exited his No. 16 Chevrolet Camaro smiling wide. Allmendinger was let go from JTG-Daugherty Racing after the 2018 NASCAR Cup Series season, where he picked up one win for the team at Watkins Glen International in 2014. Since 2019, Allmendinger has made Kaulig Racing his home, albeit on a part-time basis. After two disqualifications in post-race tech, he made up for those misfortunes by winning at the Charlotte Motor Speedway ROVAL last September. By winning again today, Allmendinger is happy to be on the upswing of things again.

Even though Gragson wasn’t able to claim the checkers, his runner-up finish was more than enough to win him the first $100,000 Dash 4 Cash prize of the season. Team that up with his win at Bristol Motor Speedway on Monday (June 1), as well as his eligibility to compete for another $100,000 prize next weekend, Gragson is standing strong in the Xfinity Series garage.

Haley made it two cars on the podium for Kaulig, finishing third in his No. 11 Chevrolet Camaro. But it never came easy. Haley was nabbed for two pit road penalties, one for his crew members going over the wall too soon and another for speeding. Fortunately, these errors happened early in the race, where drivers have plenty of recovery time. And Haley did just so and was able to solidify a great team effort for Kaulig overall.

Fresh tires is the name of the game at AMS. Pitting at the right time for said tires is what elevates the opportunity to win for you. But Austin Cindric and his Team Penske crew would find out the hard way on balancing this equation.

Cindric’s No. 22 Ford Mustang was fast from the drop of the green flag. Under the race’s first caution period, Cindric was called into pit road on lap 18 to take a new set of tires while most of the field stayed out. This proved to be the biggest mistake his team would make. Cindric still won both stages, but he was ultimately no match for those around him who saved their tires for late in the going. Getting nabbed for speeding on his final pit stop also didn’t help his situation either. Cindric would settle for only a 16th-place finish at the checkers.

One Georgia native in the field would not get the homecoming treatment he would expect. After starting seventh, Ryan Sieg, a native out of Tucker, Ga., would be seen trailing smoke from his family-owned No. 39 Chevrolet Camaro only a handful of laps into the race. Sieg would go behind the wall by lap six for repairs. He would then return to the track 36 laps down, but after continuing to suffer engine woes even further, he would pull off the track for good on lap 89. Sieg ended his homecoming race in a disappointing 35th place.

Ever since the Xfinity Series has come back from the 75-day break from the COVID-19 pandemic, Riley Herbst has been on a slump. Herbst crashed out and finished 32nd in the season opener at Daytona International Speedway but rebounded to collect three straight top-10s. In the four races since, his best result has only been 12th.

On lap 69 on Saturday, Herbst was running by himself in eighth before breaking free and spinning off of turn 2, slightly backing into the wall with the rear end. So far, Herbst has been the worst-performing full-time Joe Gibbs Racing driver. If Herbst wants to shake off these recent sluggish performances, he’ll need to elevate his game at another track he’s never previously visited before and hopefully stop the bleeding at Homestead.

Anthony Alfredo continues to capitalize on good opportunities, despite his NXS career being so young. The driver nicknamed “Fast Pasta” delivered his second top-10 finish in his first three career starts. Alfredo fell a lap down earlier in the day, but thanks to earning the free pass under a caution period, Alfredo steadily worked his way up the grid on the final restart, ending his day in 10th.

Saturday was all about the No. 15 for young Colby Howard. The 19-year-old driver from Simpsonville, S.C., picked up his first career top-15 finish by finishing 15th. He did so while driving the No. 15 Chevrolet Camaro for longtime owner Johnny Davis. It was a career-best day with a few odd coincidences sprinkled over it.

“Oh my God, I won on an oval. You like that? Wooo!” -AJ Allmendinger

“I ate AJ’s bait there at the end … He started saving his tires, and I thought he burned his tires up. Just got beat by his experience. He’s a phenomenal driver and a great competitor in the series. It was a lot of fun racing with him.” -Noah Gragson

The Xinifty Series will continue it’s 1.5-mile oval swing, heading down to Homestead-Miami Speedway in South Florida for a doubleheader weekend. The first race of the weekend, the 2020CENSUS.GOV 300, will take place on Saturday, June 13. Scheduled green flag time will be 3:30 p.m EST, and it will be televised on FOX. The second part of the doubleheader will be the following day at noon and will air on FOX Sports 1.

Congratulations to A.J. and thanks to Kaulig Racing for giving him this part-time ride. He always is fun to watch and is a great driver. I wish someone would get him a full-time ride…he deserves it. J.T.G Daugherty has done nothing with his replacement. Keep winning A.J.!!