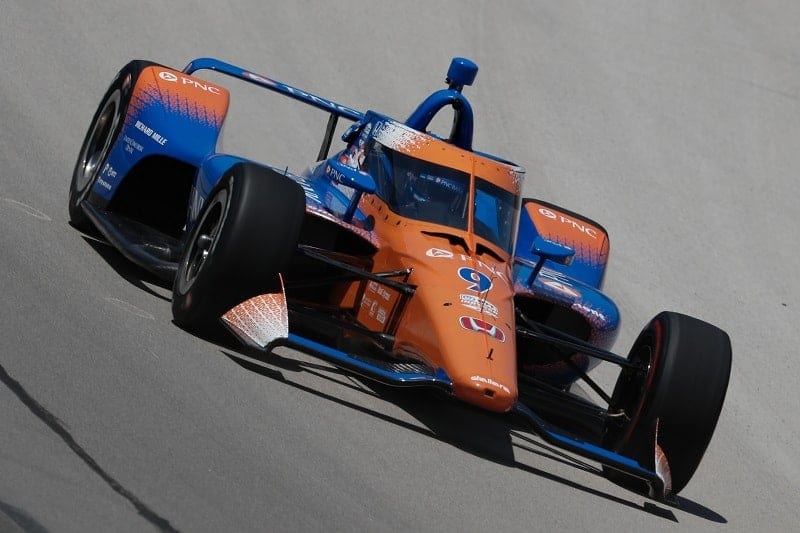 Scott Dixon on track during the 2020 Genesys 300. (Photo Credit: Joe Skibinski/Courtesy of IndyCar.)

The 2020 Genesys 300 proved that the NTT IndyCar Series hasn’t missed a beat. Despite the series starting almost three months later, Saturday’s (June 6) event at Texas Motor Speedway was full of the excitement, adrenaline, and WTF moments that fans have come to expect.

While Scott Dixon easily drove to his third Texas victory, the merciless oval at Texas also saw several cars wreck, a few tires vibrate, and someone who didn’t even make it to the starting grid. Plus, a few surprising names ended up in the top 10. It was definitely a season opener to remember!

1. Scott Dixon has the patience of a saint

Scott Dixon is a five-time NTT IndyCar Series champion for a reason, and his incredible drive in the 2020 Genesys 300 showcased it. The man they call “The Iceman” is always cool under pressure, and it was Dixon’s patience that helped him secure the victory at Texas.

Dixon and his longtime strategist Mike Hull kept their cool when the No. 9 PNC Bank Chip Ganassi Racing Honda saw an eight-second lead dwindle down to almost nothing because of lapped traffic. Dixon found himself stuck for long periods behind both Will Power and Alexander Rossi; the latter was two laps down at that point. But he stayed patient, and let the situations resolve themselves.

Conversely, when his much younger and less experienced teammate Felix Rosenqvist was picking up speed to rival Dixon’s, he wasn’t patient and ended up in pieces. With time running out, the Swedish driver lost control of the No. 10 NTT Data CGR Honda while trying to pass James Hinchcliffe and turned what could have been a win into a 20th place finish instead.

You can’t get too angry at Rosenqvist, who had his first career IndyCar victory in his sights, but the difference in their stories shows why Scott Dixon is top of the class.

Five-time @IndyCar champ @scottdixon9 was all ?? in Texas! His season-opening win gives him at least one victory in 18 straight seasons. #INDYCAR #Genesys300 pic.twitter.com/wsJhTAWDom

IndyCar fans have all heard the phrase “Penske Perfect” to describe Team Penske. On Saturday night, they were anything but perfect, with all three of their cars having various technical issues. But even with those problems, Team Penske drivers still made up two-thirds of the 2020 Genesys 300 podium.

That speaks to the incredible talent of the drivers on this team. For Josef Newgarden to finish third despite struggling with a tire vibration for multiple stints is nothing short of a minor miracle. At one point during the race, it seemed like he was vibrating more than a massage chair while half the field drove around him, and yet he still emerged with a strong result to start his season.

Likewise, Simon Pagenaud battled his own vibration issues to finish as the runner-up. Especially on a track where tire vibrations have ruined races (and destroyed cars) with regularity, both Newgarden and Pagenaud deserve a hat tip for holding it together and still beating most of their competition.

.@Josefnewgarden talks about a podium finish for the No. 1 @xpel Chevy team at @TXMotorSpeedway and what it takes to defend the @IndyCar championship. ?

It was wonderful to see names near the top of the 2020 Genesys 300 leaderboard that IndyCar fans wouldn’t normally see up front. Zach Veach, Conor Daly, and Charlie Kimball (until he crashed at the end of the race) all looked great throughout the event.

Daly was the biggest mover of the entire race, going from 19th to sixth, and tying his previous best with Carlin. Meanwhile, Veach came in fourth and led two laps, while Kimball also ran fast throughout the evening in his debut with AJ Foyt Racing before the last-moment wreck dropped him down to 11th.

Those stats are not just good news for them, but for the entire 2020 IndyCar season overall. Audiences know the usual contenders like Dixon and Newgarden, but the best competition comes out of the most parity. If lesser-known drivers such as Veach, and particularly smaller teams like Carlin and Foyt, can run right up there with Ganassi and Penske, then this season is going to be a blast no matter how shortened it is.