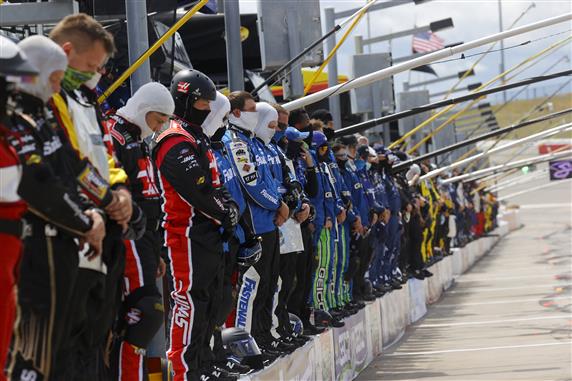 NASCAR made both literal and metaphorical statements regarding racial inequality ahead of Sunday’s (June 7) Folds of Honor QuikTrip 500 at Atlanta Motor Speedway, while driver Bubba Wallace added his voice to the many athletes who are speaking up in light of current events.

Prior to the green flag, NASCAR stopped the entire Cup Series field on the backstretch and observed a moment of silence. The league then played a video featuring statements from several drivers while NASCAR President Steve Phelps also made remarks addressing the need for change.

The display followed the league’s June 1 statement on social media declaring that their “commitment to promoting equality and inclusion continues and will never waver” and came as almost two weeks have passed since the death of George Floyd in Minneapolis.

Phelps wasn’t the only person with something to say before the Folds of Honor QuikTrip 500. Wallace — the only African-American driver in the Cup Series — also drew attention for wearing a Black Lives Matter T-shirt on the starting grid. It was emblazoned with the phrase “I Can’t Breathe,” referring to Floyd’s last words before he passed.

Wallace has been speaking openly on current events, telling ESPN’s Marty Smith earlier in the day that NASCAR drivers were “starting to dive into the tough questions” about social justice and racial equality.

Prior to today's @NASCAR race, @BubbaWallace wore a #BlackLivesMatter shirt with the words, "I Can't Breathe." pic.twitter.com/YFqRjCDKdg

The race also featured a lap 113 tribute to the military.

After the main telecast started, it should have been eight minutes before the drivers got in their cars to show how long eight minutes takes.

All together bow to the gods of political correctness. Screw that. Glad I didn’t watch.

And yet again, Bubba was not allowed to win…..

Oh the things I can say THAT WOULD BE true about this virtue signaling bullshit! “Bubba” the half white guy being the pandered go to guy…NASCAR “racial expert” in residence. The attention he craves and gets, not because of his driving…

The whole thing is just nuts, and planned.