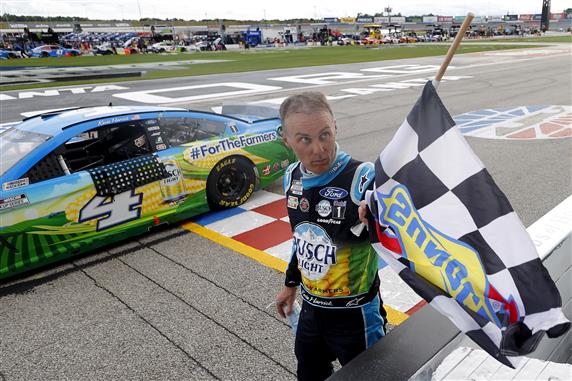 Atlanta Motor Speedway is known for its abrasive asphalt, allowing NASCAR drivers to run all over the racetrack. This weekend, there was a ton of side-by-side competition with multiple grooves being used across the sport’s Cup, Xfinity and Gander & RV Outdoors Truck Series.

It’s a track where tire conservation is key, giving an edge to drivers with experience. And when the checkered flag flew at the end of each race, it was a veteran standing in victory lane, soaking up the stats.

OK, maybe not countless. But riddle me this one: In seven trips to the Peach State with Stewart-Haas Racing, the 2014 Cup champion has led 1,111 laps. Break that down per race, and you’ve got 158.7. Nuts! Combined, every other driver in the field has led more than 100 laps in a single race at AMS just once: Kyle Larson, 2019.

It took 10 races, but @MartinTruex_Jr's third-place finish is his first top-five effort of the 2020 season.

Harvick has this distinct line he runs at AMS, which FOX labels as “Harvicking.” It’s a standout approach compared to other drivers, leading the No. 4 to great success on this track. Though he’s led all those laps, Sunday (June 7) was just Harvick’s second win in those seven starts with SHR and third overall. But this place remains very special to him, dating back to reaching victory lane in his third Cup start overall in 2001.

“This is just a racetrack that I’ve taken a liking to,” Harvick said after the race. “You always come back and have those memories… I love to win here.”

The victory is Harvick’s second of the season, making him the fourth repeat winner through the first 10 races of 2020.

Since AJ Allmendinger transitioned to the stock car world in the mid-2000s, he’s always been a frontrunner at road courses due to his open-wheel background. Winning on an oval, though, has always eluded him.

After being replaced at JTG Daugherty Racing following the 2018 NASCAR Cup season, Allmendinger found himself in a part-time role in the sport’s Xfinity Series for Kaulig Racing. In 2019, he competed in five events, scoring a win at the Charlotte Motor Speedway ROVAL. He was also disqualified from top-five runs at both Watkins Glen International and Daytona International Speedway.

2020 started off rough for the California native who failed to qualify for the season opener at Daytona. His first race of the season didn’t come until last Monday (June 1) where he finished 10th at Bristol Motor Speedway.

This weekend at Atlanta, he returned to the No. 16 Chevrolet for Kaulig, beginning Atlanta’s 250-miler from 30th. Throughout the race, he methodically made his way through the field, finding himself third after the final pit stop. Then, the top two drivers in the running order — and three of the top five (Chase Briscoe, Austin Cindric and Justin Allgaier) were all busted for speeding on pit road. New leader: No. 16.

Allmendinger went on to pace the final 37 laps up front en route to his first NASCAR victory on an oval. Of his 402 national touring series starts, 374 have come at ovals. In 28 starts on road courses, he has four victories.

"OH MY GOD I WON ON AN OVAL" @AJDinger screams lol.

For Allmendinger, his love of racing is back following a 2018 season where his passion was lost.

“I just didn’t like racing anymore,” he told media following the win. “I felt miserable every week.”

Now, the ‘Dinger’s put that misery to rest.

On May 11, NASCAR announced the field size for the Xfinity and Gander RV & Outdoors Truck series races temporarily would be expanded to a maximum of 40 vehicles each. That was because no qualifying would be held for the foreseeable future and the sport didn’t want to discourage race team attendance.

In the two Truck races since the COVID-19 shutdown was lifted, teams have shown out — and shown up, producing an entire 40-truck field. Heck, seven trucks actually didn’t qualify for two straight races, at Charlotte Motor Speedway and Atlanta, because 47 were on the preliminary entry list. It’s the first time in series history there have been that many trucks in the field for consecutive weeks.

Over the 26-year history of this Truck Series, having a full 40-truck starting grid is a bit of a rarity. Of course, NASCAR has limited the fields to 36, then 32 trucks per race beginning in 2015.

Saturday’s event (June 6) was just the seventh time in series history the trucks have had 40 teams in the field. Sure, some backmarkers took away spots from the likes of Erik Jones (Charlotte) and David Ragan (Atlanta), both of whom had their part-time efforts excluded due to their position in owner points.

Between Charlotte and today, it's the first time ever the Truck Series had 40 trucks start in consecutive races.

It's only the seventh time 40 trucks have started a single race, period.

Prior to the race at Charlotte on May 26, the last time the truck field was 40 deep was November 8, 1998. That was a race won by Jack Sprague in Sin City during a time of relative health for the series.

After a couple of lean years, it looks like the garage is plenty full in the Truck Series once more.