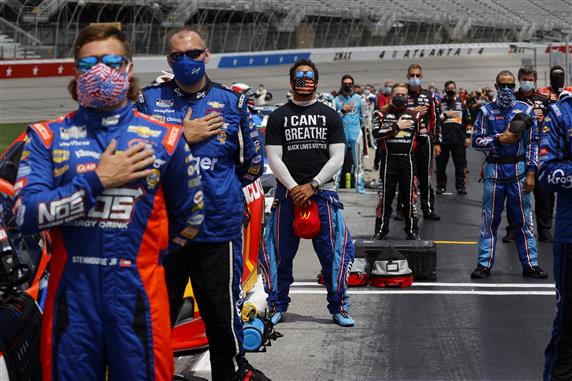 Who… should you be talking about after the Folds of Honor QuikTrip 500?

Kevin Harvick won his first NASCAR Cup Series race at Atlanta Motor Speedway in 2001. The triumph came just weeks after being called into the Cup Series a year ahead of schedule following the death of Dale Earnhardt, and he won it by beating Hall of Fame driver Jeff Gordon to the line in thrilling fashion. Sunday (June 7), almost 20 years later, Harvick scored his 51st Cup victory in less thrilling fashion in the 2020 Folds of Honor QuikTrip 500. But it was a solid performance nonetheless, leading 151 laps in the process and pulling away during the race’s final stage.

Harvick pulled a fitting tribute afterward, pulling off a polish victory lap while putting three fingers out the window in honor of Earnhardt. Somewhere in between that first victory and this one, Harvick has cemented his own Hall of Fame career.

Meanwhile, this year’s rookie class continues to put on a good battle for the top spot each week.  Sunday, it was Tyler Reddick who impressed. He ran inside the top 10 early, had some struggles midrace but turned it around late to finish 16th. Reddick has been solid from the start and remains a steady hand after his promotion at Richard Childress Racing.

Christopher Bell and Cole Custer are slowly heating up behind Reddick, reforming their three-man battle for the NASCAR Xfinity Series title. There’s also a rookie surprise; Front Row Motorsports’ John Hunter Nemechek has been playing spoiler. Reddick leads the Rookie of the Year battle currently, with Nemechek second ahead of Custer and Bell.

Sometimes it’s about more than racing, and this weekend, NASCAR and the drivers acknowledged that with a moving moment before the start. The cars came to a stop on the frontstretch for “30 seconds of listening” on the pace laps after NASCAR President Steve Phelps addressed the #BlackLivesMatter protests gripping the country.

Phelps said “we must do better as a sport,” moving forward from NASCAR’s complicated history surrounding race. Many drivers, from the smallest of teams to the biggest, created a moving video, also pledging not to stay silent. Can NASCAR be a leader in this time of change? Maybe there’s a time for everything.

A moment of silence and a message from NASCAR President Steve Phelps and drivers. pic.twitter.com/jy1U48qeLX

NASCAR STANDS UP FOR RACIAL INEQUALITY AT ATLANTA

Where… were the other key players at the end of the QuikTrip 500?

Pole sitter Chase Elliott had a top-10 car on Sunday, which was par for the course in a Chevrolet camp down a cylinder on speed. None of the three Chevys inside the top 10 managed a top-five result. Elliott led the first 26 laps and scored points in each of the first two stages, but wasn’t a threat for the win on this day.  He finished eighth and sits third in driver points with one victory on the year.

Defending Atlanta race winner Brad Keselowski was coming off wins at Charlotte and Bristol. He led twice Sunday for a total of five laps but, like Elliott, didn’t have a car quite strong enough to contend for the win.  He wound up ninth.

Active Atlanta win leader Jimmie Johnson had an eventful day before the race but didn’t really have more than a top-10 car in it.  However, he finished seventh, the best among the Hendrick Motorsports camp and, more importantly, continues to look like his old self. Johnson’s digging hard for every position he can get, resurrecting that bulldog mentality he has when he can really race the field.

Defending Cup champ Kyle Busch had the field covered, at least with the exception of Harvick. Busch finished runner-up on Sunday, still winless for 2020 but a clear step forward in a difficult season. He led seven laps on the day and battled hard for spots all afternoon, including that runner-up finish he wrested away from teammate Martin Truex Jr. as the laps wound down. At this point, no wins means little because Busch will be in the title hunt when all is said and done.

When… was the QuikTrip 500 moment of truth?

There’s a reason Atlanta isn’t usually on the summer docket: it’s really hot. The heat doesn’t affect the cars as much as it once did, but it does affect the drivers. Bubba Wallace was taken to the infield care center for feeling faint after climbing from his car, dizziness which persisted through his television interview.  Ryan Newman also had to sit down on pit road after the race while others were asking for water and ice as well.

There is a very fine line here. Races should be long and difficult, a test for driver stamina. However, it’s also a reminder that racing is dangerous because it’s so hard.

The next stretch of races will be a real test, though. There’s a Wednesday event this week at Martinsville Speedway, Homestead-Miami Speedway next Sunday and Talladega a week later. Who can take the heat will play a role in how these races turn out.

So… about Martinsville Wednesday night. For the first time in its more than 70 years in NASCAR, the track will host the Cup Series under the lights. If Bristol Motor Speedway and Richmond Raceway are any indication, the intensity will only ramp up as the sun sets and nighttime racing takes center stage.

Who to watch? Do not count out nine-time Martinsville winner Johnson. He’s been fast since NASCAR’s COVID-19 return and is perhaps hungrier for a win more than anyone else in the field. He’s also gotten close a couple times this year (Darlington Raceway, Charlotte Motor Speedway). Johnson’s disadvantage will be his starting position; the best he can do via the current lineup rules is 13th. Starting near the front is a huge advantage at Martinsville.

Among the drivers who do have a shot at the front for the start Wednesday is five-time Martinsville winner Denny Hamlin, a driver who already has two wins this year.  He’s almost as good at the paperclip as Johnson is. Come to think of it, a Hamlin-Johnson duel at the finish would be something to watch.

How… fast have the years flown?

Speaking of Johnson, Sunday was his last race at Atlanta, a track where he won five times. Before Sunday, the track had grandstands named for two seven-time Cup champions, Richard Petty and Dale Earnhardt. Now, there are three, as Johnson will be immortalized along with the two men he shares the title record with.  He also gave the command to start engines, a fitting honor to a great career. As the season moves on, there will be more lasts, and more tributes for Johnson, who is certainly deserving.

The downside is, of course, that many of those moments won’t be shared with the fans. A few military members will be in attendance next week at Homestead, but Johnson isn’t getting the sendoff he deserves with many questions still hanging over the 2020 season.

He won’t go out without fanfare; however, it’s been a bit anticlimactic so far. Maybe that’s fitting for Johnson, who went much of his career without always getting the credit he should have.

Number 7: Why is Gase in the event. He lost 16 laps in 300 green flag laps at about 35 seconds per lap. It’s the same every event. Get rid of the drivers who are rolling road blocks. It’s going to be a joke at Martinsville.

NA$CAR likes rules. Here’s 2 new ones. Any car that loses a lap due to a penalty can’t get a free pass. Only one free pass per car per event.

I have always believed that all lives matter. Did anybody go to the streets to protest when 2 black men beat to death a 88 year old veteran in Seattle.I guess his life did not matter. Apparently the 331 white people who were killed by police last year didn’t matter, however the 212 black people killed by police did matter.Our country is in very serious trouble if we don’t all believe that all lives are precious no matter the color of a persons skin color.

Donovan Bennett gives an explanation about why All Lives Matter upsets some people.