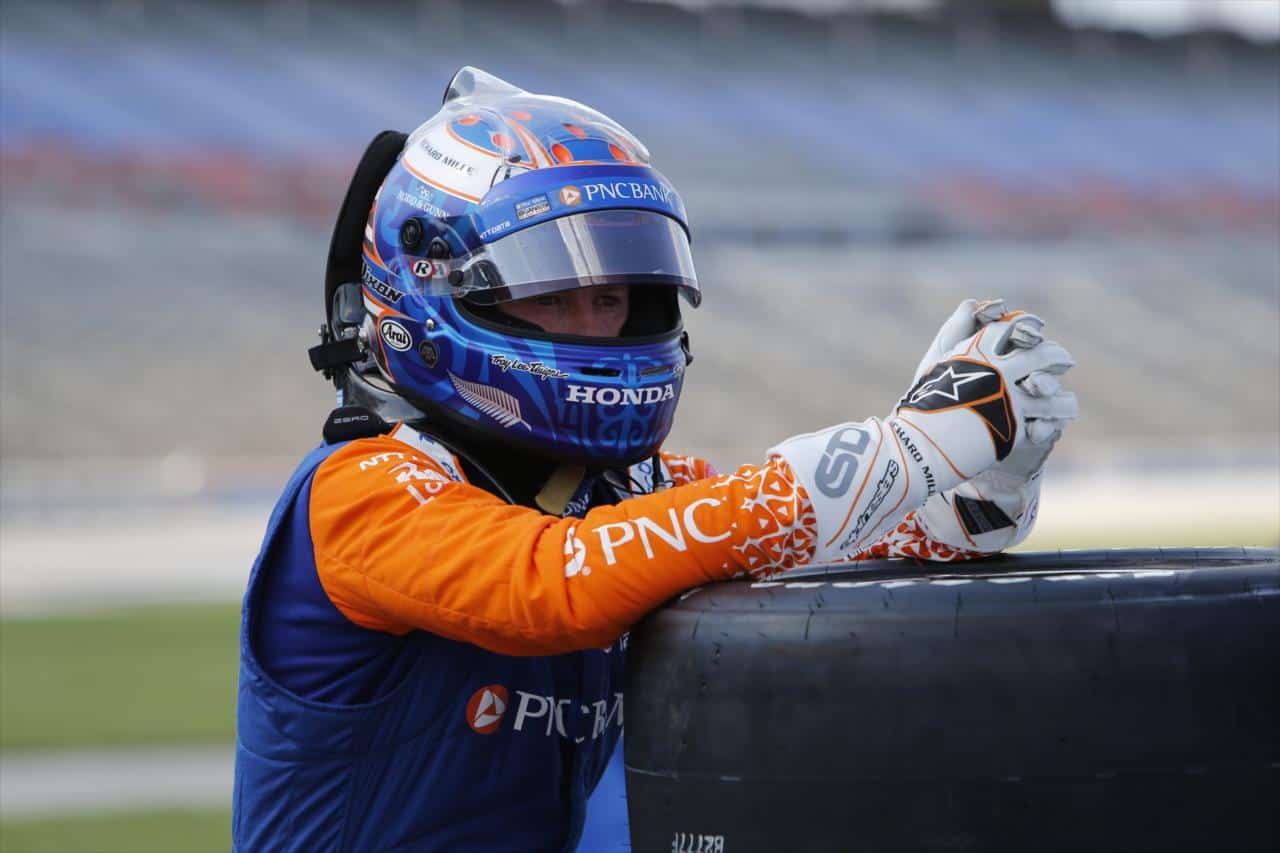 Scott Dixon was the unquestioned star of the NTT IndyCar Series’ long-awaited return on Saturday (June 6), as the five-time champion easily won the Genesys 300 at Texas Motor Speedway. The victory was Dixon’s third at the track, the most of any active driver in the series, and gave him his 18th consecutive season with at least one win.

It was also the start to a 2020 IndyCar season that is unprecedented in many ways. After clinching his latest Texas victory, Dixon spoke to Frontstretch about not only his dominant evening on the track, but his latest line in the history books and the value of experience while IndyCar is going through so many changes.

Brittany Frederick, Frontstretch: The No. 9 PNC Bank Chip Ganassi Racing Honda was dominant almost all night at Texas, with you leading 157 of the 200 laps. What was the drive like from your perspective? Did it feel as commanding as it looked?

Scott Dixon: The whole day was good. The car rolled off really well. We’d been working extremely hard on just trying to fix some of the issues we had last year. We had some new people, plus a ton coming back over from the GT program; he engineering depth and everything got a lot stronger, so development was good through the winter.

The DIL, the simulator with Honda that we’ve been using for the last three weeks in preparation for Texas, has been really good. Lots of things we didn’t think we would try or have the time to try on track, we were able to kind of do [with the simulator]. Gave us some ideas; we were able to sort of verify them once we got here.

The PNC Bank No. 9 was strong all night. We had a couple little issues in the pit stop there; I don’t know if I went long. We had a bit of a bobble and I went from first back to third. The car had some really good speed. It was just nice to drive in traffic—never really had to push too hard, just trying to make sure we could stay ahead of the rest of them.

Not often you get a car like that. Just very thankful to have that. The team gave me an amazing car. It was a fun night for us on the No. 9. It’s great to be back in the car after such a long break [and] to do it like that.

Frontstretch: Winning the Genesys 300 was also significant in your personal record book, being your third victory at Texas and putting you that much closer to being number two on the all-time wins list. What does it mean to Scott Dixon to realize all these statistics?

Dixon: It feels amazing, don’t get me wrong. I think we’re all in this business to win. With how tough the competition is, they come around a lot fewer than they used to. When you can pull it off, especially just how dominant the car was tonight, it’s always nice.

For me, to even be kind of listed with those names is amazing. It doesn’t ever really sink in, to be honest. I feel very lucky and privileged to do what I do, to get to race with the best in the world. To still have A.J. [Foyt] and Mario [Andretti] come to the track, I think that’s the coolest thing. And the Unsers; a lot of legends of the sport. I just feel lucky and very privileged to be with this team, able to come here and try to win races.

Five-time @IndyCar champ @scottdixon9 was all ?? in Texas! His season-opening win gives him at least one victory in 18 straight seasons. #INDYCAR #Genesys300 pic.twitter.com/wsJhTAWDom

Frontstretch: IndyCar is changing drastically right now, whether it’s current events, the technology, or the new ownership. You’re one of the series’ most experienced drivers; do you think that provides an edge during the 2020 IndyCar season as teams try to adapt?

Dixon: I think experience is good most of the time. It can also set you in your ways a little bit too much as well. If something changes[and] it’s not what you’re expecting, I think that can be a bit detrimental as well.

Knowing the process of the race, the tires—even though those things can’t change a lot, you kind of have, all of us do, a pretty big memory bank of things that do and don’t work. This year for us it’s been a little bit different, with a change-up on the 9 car with the engineering side. That’s been a little bit of a process.

But I think experience tonight definitely helped. You saw some people early on make some mistakes pretty quickly that maybe if they’d done a few more races before we got to Texas, that wouldn’t have happened.

The 2020 IndyCar season continues on Saturday, June 4 with the GMR Grand Prix at Indianapolis Motor Speedway. The race airs at 12:15 p.m. ET on NBC.