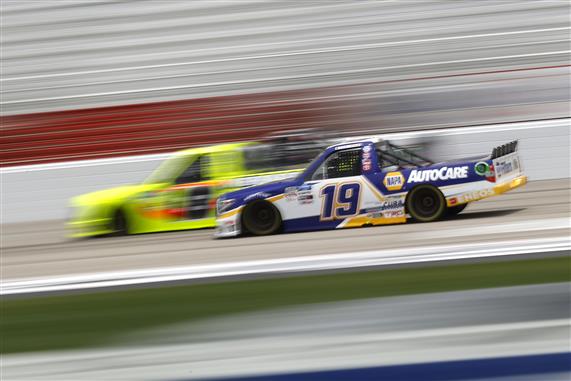 Atlanta Motor Speedway proved to be a tough (and hot) track for the NASCAR Cup Series underdogs, as only one was able to finish inside the top 20. Christopher Bell, driving the No. 95 Toyota for Leavine Family Racing, ended up 18th. Bell had a run-in with Erik Jones just before the end of stage two while racing four-wide. Jones’s tire went flat and he had to pit, which put him a lap down. The No. 20 Joe Gibbs Racing pilot was understandably upset after the contact.

On the plus side, Bell has had a few strong results so far — all coming after NASCAR’s return to competition in May. He earned ninth-place finishes at both the Coca-Cola 600 at Charlotte Motor Speedway and the Supermarket Heroes 500 at Bristol Motor Speedway. Additionally, Bell gained 13 positions to end up 11th in the Toyota 500 at Darlington Raceway.

However, Atlanta’s old asphalt surface (and high temperatures) appeared to be too much for the ‘dogs to overcome.

Quite a few others settled for the low-mid 20s; Bubba Wallace was the furthest of these in 21st. Wallace was running as high as 15th at one point during the race, but fell back just outside 20th by the end.

After Wallace exited the car after the race, he sat on the ground and told FOX he stood up too fast, got dizzy and fainted. He was taken to the infield care center where he was treated and released. Later Sunday night Wallace posted on his Twitter account, “I’m good.” Josh Bilicki, who drove the No. 27 car of Rick Ware Racing, was also treated and released from the care center (see tweet below).

Something unusual happened between two underdog teammates during the race: Both Front Row Motorsports cars spun off turn 4 and across the frontstretch. John Hunter Nemechek got turned around on lap 96, then on lap 203 he made slight contact with Michael McDowell‘s left-rear. McDowell then spun and slid across the grass in the same spot as Nemechek.

The Xfinity and Gander RV & Outdoors Truck series long shots fared much better than the Cup teams. In Xfinity, Brandon Brown once again took the top spot of all the underdogs, coming home 12th. Many were right around the same range as Brown; six of the next eight, in fact. Jeremy Clements, Brett Moffitt and Colby Howard finished 13th-15th behind Brown. Howard’s 15th place was a career best for the young driver of the No. 15 car of JD Motorsports.

Further back in 18th was Bayley Currey in the No. 74 car of Mike Harmon Racing, which tied his career-best finish. Ronnie Bassett Jr.’s No. 36 car was 19th, and Jesse Little completed the top 20 drivers.

In Trucks, Front Row Motorsports’s No. 38 driver Todd Gilliland snagged fourth in overtime for his second top 10 of the year. Derek Kraus also nabbed his and McAnally Hilgemann Racing’s second top 10 of the season with a seventh-place finish. The next closest ‘dog was Brennan Poole back in 17th.

Cup again has a busy week as they head to Martinsville Speedway Wednesday (June 10) before going to Homestead-Miami Speedway on Sunday. As long as Wallace is fully recovered and hydrated, he should have another strong day at Martinsville. He finished 17th and 13th in both events there last year.

Speaking of busy, Xfinity drivers have a doubleheader coming up at Homestead. Wherever they finish Saturday determines where they will start on Sunday, only the first through 15th spots will be inverted.

Jesse Little should be one to watch this weekend; he and his truck finished ninth at Homestead in 2018.

It will be interesting to see if Clay Greenfield will continue to compete in the Truck Series. Could he grab a top 20 Saturday night?

Started getting a bit overheated with about 50 to go. Figured a trip to the infield care center was the best option. Glad I did! Feel great now. Now for the real race. 800+ miles back home to WI ? https://t.co/ItNoptPV6j

Another solid run for @ColbyHoward16, scoring a career-best finish of 15th for @JDMotorsports01.

Add spun into an inside wall/LR crush panels ripped out of it. It’s been a tough four races for her https://t.co/ARaV1lD6dO

Tough day… TV never said but we had a RF tire go down at the end after earlier contact with another truck. Tore the radiator surge tank off and was dumping all the water out. Ready to put today behind us and move on to the next one.

My @JDMotorsports01 guys gave me a super fast @tufcoflooring Chevy earlier on & we struggled being crazy loose rest of the day. p20

Bound to have strong finishes. Owe it to all y’all pic.twitter.com/1cuM2B630j