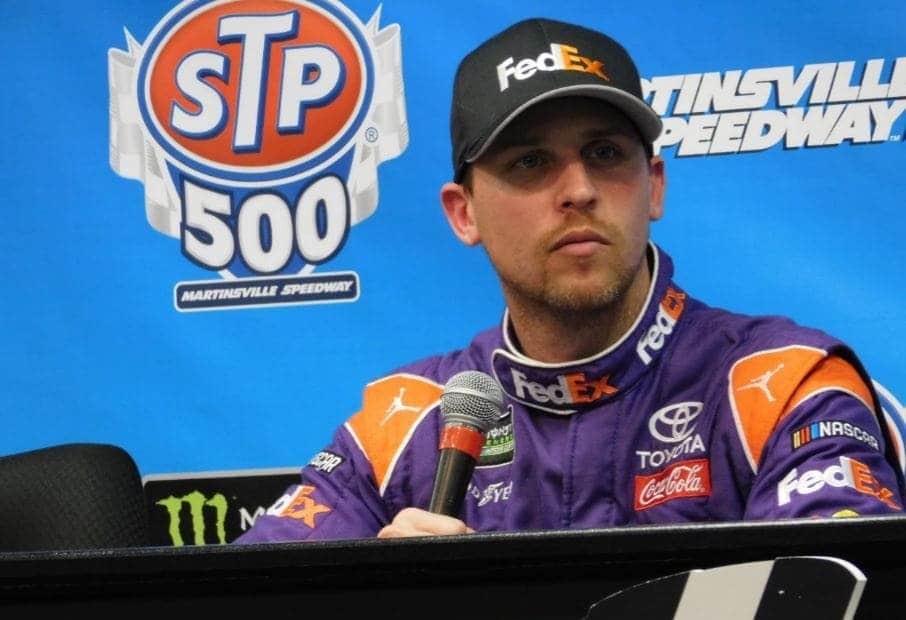 Everyone loves some good short track racing and no one is more excited than NASCAR Cup Series drivers as they head to Virginia this Wednesday (June 10) for the Blue-Emu Maximum Pain Relief 500.

Additional prestige surrounds the event as it is the first complete one to be run under the lights at Martinsville Speedway, the only circuit to have hosted a Cup race every year since NASCAR’s inception in 1949. Get those NASCAR DraftKings lineups ready for a primetime showdown!

Once again this week, the starting lineup is based upon a random-tiered draw. That means Team Penske’s Ryan Blaney will start alongside Stewart-Haas Racing’s Aric Almirola on the front row. Practice and qualifying have been axed, meaning every competitor will start on a blind racetrack which could prove to be difficult for Cup rookies. Note that Christopher Bell, Cole Custer, John Hunter Nemechek, Brennan Poole, David Starr and Tyler Reddick have never made a Cup start at the facility. However, Quin Houff may face the biggest challenge of all, since he has never made a start of any kind at the .533-mile paperclip.

For this week’s contest, 500 circuits are in store. You will certainly want to look for drivers who will stay up front and lead a lot of laps. While it may look like an unassuming little short track, Martinsville can be one of the trickiest places NASCAR visits all year, so drivers with experience and proven results may be a good way to go.

Before we move on, it is a good time to look at last week’s results. Although normal columnist Joy Tomlinson is out this week, let’s take a look at her results from Atlanta Motor Speedway last weekend.

Kevin Harvick was a clear choice here as he dominated and won the event. However, a difficult, penalty-filled day for Erik Jones and mundane runs by Michael McDowell and Bell stagnated a great result.

He might be the second-most expensive driver this week, but a Hamlin pick may be well worth the investment. The native of Chesterfield, Va. just might have the hometown advantage, too.

As mentioned earlier, Hamlin fits the bill with both experience and proven results. Although he has not won at Martinsville since 2015, Hamlin’s five wins at the paperclip are second-most in the field.

And though he had an unlucky draw for his starting position, it puts Hamlin in prime position to gobble up some valuable DraftKings points. He will roll off the grid in 12th, the worst spot he could start in via his points position. But in his last five Martinsville starts, Hamlin has equaled or finished better than the 12th position, meaning it’s likely he will collect some good position differential points as he moves forward.

Also, the Joe Gibbs Racing driver is one of four campaigners with two wins this season. It wouldn’t be out of the question if Hamlin became the first driver to get three victories in 2020 and lead some points-paying laps in the process, too. The veteran is perhaps the hottest pick this week.

In the 10 races at Martinsville since March 2015, Truex has only finished outside of the top 10 twice. Even better, Truex is the defending winner of the fall event and subsequently has the best average finish of any driver in the last four races at the track (4.0).

Although he starts fifth, Truex is reliable and consistent. Look for him to start up front and stay there; he led 464 laps in winning last fall.

That’s the thing that has been holding Truex back in 2020: his uncharacteristic lack of wins. But while Truex and his new crew chief James Small might still be attempting to gel, five top 10s in six starts since the resumption of racing after the COVID-19 hiatus shows the duo is well on their way.

Don’t forget about Truex’s complex relationship with short tracks. Once dogged by tracks under a mile, Truex has become a force to be reckoned with on the small ovals in the last couple of years. Unlike some of his teammates, the New Jersey native has stayed away from volcanic short track tempers, too (Joey Logano being the lone exception).

Blaney might be a wild card this week, but the de facto pole sitter is in prime position to get some extra points. Unfortunately, if Blaney does not win, he will lose points due to position differential loss. However, by starting first, the Team Penske driver is in the best position to snag some bonus points for leading laps.

Blaney’s statistical history at Martinsville is complex, but it is keen to keep in mind that he still only has limited starts on the Virginia circuit. Since joining Penske, Blaney has proved to be less consistent than his teammates but has still found his way to the front. While he has not led that many laps (145) at the track, he still has one of the best average finishing positions in the field at 12.9. Two straight top-five finishes here have helped bump the number up.

It may be a gamble to play him this week, but Wednesday is a rare instance where Blaney could actually be a “value” pick. Use him.

The second Ryan on the list this week, Newman’s role as a take-no-prisoners driver might best suit him at Martinsville. Although the sensible veteran has had a mediocre return since his injury in the season opening Daytona 500, Newman’s price of $6,800 this week makes him very marketable.

The Roush Fenway Racing veteran has not necessarily been the most flashy competitor, but he has been rock solid here, consistency that you need for 500 laps. Although his one infamous win at Martinsville, which may have been gifted, came over seven years ago, Newman has scored some very respectable results in moderate equipment.

Position differential points may come into play as Rocket Man starts a modest 16th this Wednesday. Look for him to plough forward throughout the night.

On the surface, Almirola’s numbers might scare you away, but there are several factors tilting in his favor this week. Number one: he is super cheap. I was a bit taken aback by Almirola’s $6,400 price tag and maybe the oddsmakers got scared off by his four career top 10s in 22 starts, a figure of just over 18%.

After his breakout season in 2018, Almirola has been stagnant since then as well, more of a top-15 competitor than a threat to win. However, it is important to realize that much of his tabulated statistics came before his current tenure at Stewart-Haas Racing.

A closer look reveals Almirola has been an underrated short track racer. Two races ago, at Bristol Motor Speedway, Almirola ran up front throughout the event. There is no reason why he couldn’t do the same at Martinsville. He will roll off the grid from second place for the third straight time, and on Wednesday, I expect him to stay there.

Like Almirola, I was somewhat surprised to see Buescher listed this cheap, but the price certainly could pay off. Buescher’s predecessor in the No. 17 Roush Fenway Ford, Ricky Stenhouse Jr., struggled mightily at Martinsville. A fresh face in that car, though, should make a difference.

Although Buescher’s performance has slipped a bit since the COVID-19 break, his three career top-15 finishes at Martinsville stick out to me. All of them came in subpar equipment.

Jack Roush’s longtime protege, Buescher is back with RFR and still very much in the thick of things when it comes to putting them in the playoffs. Like Hamlin, Buescher also drew the worst starting position in his points tier (24th). That means those extra position differential points are there for the taking. A quiet Buescher is known to pounce on these opportunities.