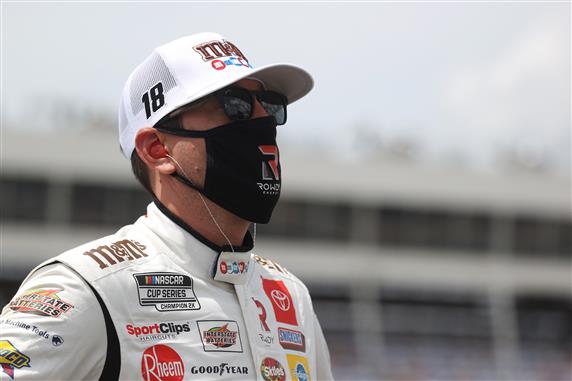 The first NASCAR Cup Series race at Martinsville Speedway was held in 1949, the series’ inaugural season. Red Byron, NASCAR’s first champion, won the event with a face covered in the red clay dust that made up the track’s surface. 71 years later, Martinsville will host its 143rd Cup race on Wednesday, June 10, and for the first time ever, the entirety of the event will be held under the lights around the now-paved half-mile short track. It’s a historic moment that goes well beyond the NASCAR FanDuel rosters you’ll set tonight around racing at this .533-mile facility.

Martinsville is steeped in NASCAR lore. Just a stone’s throw from the track is Stuart, Va., the original home of Wood Brothers Racing, the oldest team in NASCAR. Just a stone’s throw from the other side of the track is South Boston Speedway, where a who’s-who of Mid-Atlantic NASCAR Cup stars stopped at on their way up the ladder over the years. And near that is the town of Danville, Va., where the home and garage of NASCAR Hall of Fame driver Wendell Scott is located at.

In some ways, it’s only fitting that the random draw for this race would decide on a second generation NASCAR driver as the polesitter. Ryan Blaney may be starting on pole, but his polarizing short track history makes him a hard pick in any of these races until he can win one.

Here is my lineup for Wednesday night’s race.

So yes, Busch has not won a race this year so far. He’s due. And while he “only” has two wins at Martinsville, he’s been uber consistent in recent seasons. Since 2012, not only has Busch finished inside the top 15 in every race at Martinsville (sans the 2015 spring race, where Busch was on the mend with injuries), but more importantly, he’s completed every single lap in those 14 starts. The lap completion bonus is huge at 500-lap races like this one; while it’s not smart to bank on a dominator, it is smart to bank on somebody who can complete every lap. And Busch is always money in Virginia short tracks.

Elliott, himself, has had some success at Martinsville, most notably finishing second in this race last year and almost winning in 2017 before tangling with Denny Hamlin in the closing laps.

It’s strange how much of a roller coaster Busch’s stats are at Martinsville. Yeah, he has two wins, but he only has one other finish inside the top five. He has seven top 10s, but that’s with almost 40 starts on his resume at this track.

Still, Busch is a solid option this week because he’s been a solid option every week. Busch’s average finish this season of 11.0 is slightly better than his season best of 11.1, putting him on track for a career year. The 2004 Cup champion isn’t going to dominate, but he should be able to bring home a solid top-10 finish.

Byron’s stats look very middle-of-the-road at Martinsville. However, his lone top-five finish was second in the fall race last year, so the No. 24 team definitely knows a way to get around the paperclip.

Byron needs to turn it around; he’s currently ranked 17th in the championship standings, and his only finish in the single digits this year has been that eighth at Bristol Motor Speedway a couple of weeks ago. Martinsville could be a good place for the young driver to start some momentum heading into the dog days of summer.

Once again, I know that stat line looks bad, but this team may have just a little something on these short tracks. A couple of weeks ago, Hill finished 19th at Bristol on the lead lap, a very impressive finish for a team this small and, more importantly, this cheap.

There’s usually at least one small team that ends up with a great finish at Martinsville, because at Martinsville, it’s all in the chassis. Engines are important at any track, but they’re not that important if the car can’t turn. And making the car as aerodynamic as possible is a waste of time at a track built like two quarter-mile drag strips with turns connecting them. That could play into Hill’s hands if they have a mistake-free day.