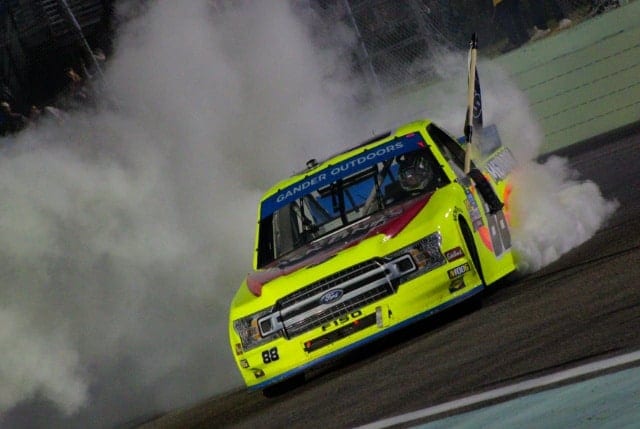 The NASCAR Gander RV & Outdoors Truck Series heads to Homestead-Miami Speedway for their fifth race of 2020.  The 25th Annual Baptist Health 200 will take place on June 13, 2020 at the 1.5-mile oval down in Florida. 40 trucks are entered for 40 spots on the grid, allowing all entries to make the race.

NASCAR Cup Series drivers Kyle Busch and Chase Elliott return for their third consecutive races in the Truck Series. Elliott won the division’s first race back at Charlotte Motor Speedway, and Busch led most of the way at Atlanta but suffered issues late in the race. Busch will drive his self-owned No. 51 while Elliott will drive the No. 24 for GMS Racing.

Part-time Cup Series driver Gray Gaulding also pulls a crossover, making his second truck start of 2020. He finished 34th at Atlanta in the Reaume Brothers No. 33 and returns to that Toyota for Homestead. Meanwhile, the team will also field Bryant Barnhill in their No. 34 entry. Barnhill did not qualify for the races at Charlotte and Atlanta due to the team’s position in owner points.

Driver and owner Ray Ciccarelli will start his first race of 2020, having failed to qualify for Daytona in his self-owned No. 49. The truck was run by Bayley Currey last weekend at Atlanta.

Ciccarelli isn’t the only one making his debut. Timmy Hill turns the reins of Hill Motorsports’ No. 56 over to brother Tyler, making his first start of 2020. Long Motorsports will field Dawson Cram in their No. 55 for his first race of the year. And also making his first start of 2020 at Homestead is Tim Viens, who was scheduled to qualify at Daytona before the Mike Affarano Racing hauler crashed on the way to the track. The No. 03 team itself will make its 2020 debut at Homestead.

Norm Benning will also make the field in his No. 6. He’d been too far back in owner points to qualify since NASCAR’s COVID-19 return.

The 25th Annual Baptist Health 200 will take the green flag shortly after 12:30 p.m. on Saturday, June 13, kicking off a four-race-weekend for NASCAR. Coverage will be provided on FOX Sports 1 and also on SIRIUS XM radio Channel 90. Austin Hill is the defending winner at the track while Matt Crafton returns to the track where he clinched the 2019 series title. Crafton remains the first driver in the sport’s top three series to capture a championship without winning a race.