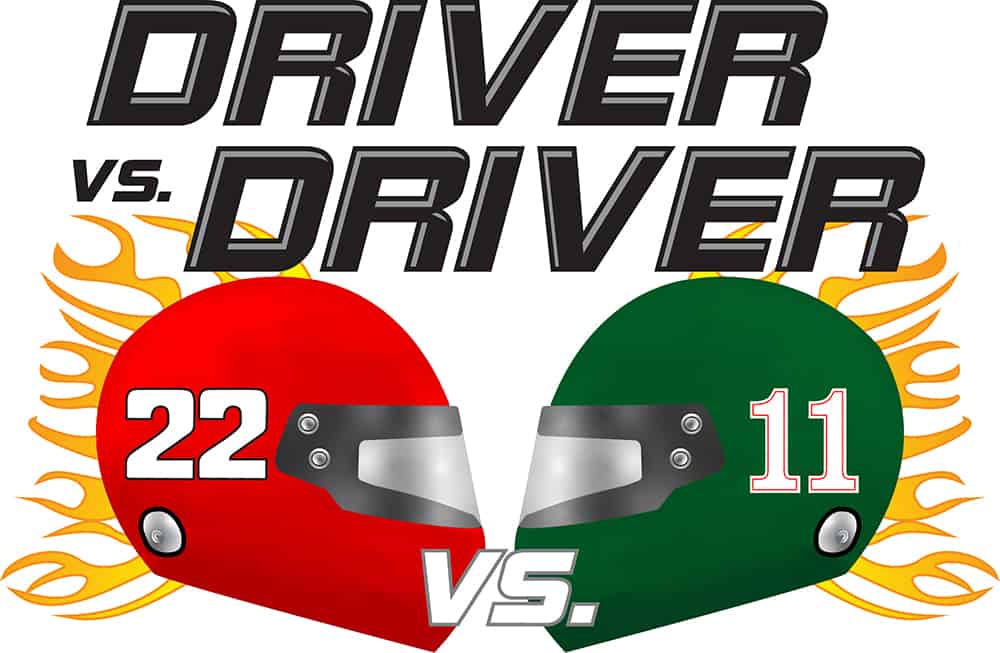 84 NASCAR Cup Series wins. Only three drivers in the history of the series have won more than Darrell Waltrip and Bobby Allison (though Allison will tell you he has 85, a matter he’s disputed with NASCAR for decades.

This month, we look closer at the drivers who have had their names called to be inducted into NASCAR’s Hall of Fame. From the early days through the playoff era, these drivers have been selected among the best ever in the sport. Here, there really are no winners; that’s up to the ages to decide. But there sure are some great conversations about the best of the best.

As if winning over 50 races isn’t impressive enough, both drivers in this week’s battle, each North Carolina natives, won dozens upon dozens of races as car owners, with their reach lasting well into NASCAR’s modern era, though their driving careers also made them pioneers of the sport.

Allison and Waltrip ruled the Cup Series in the early 1980s, but which of these two legends of the sport was better?

“If we’d been able to keep Bobby Allison, we would have won 200 races, and Richard Petty wouldn’t have.”

That’s a quote from Junior Johnson, car owner for all three of Darrell Waltrip’s Cup championships.

Before anything else, it’s important to note that Waltrip should be remembered as a fantastic racecar driver. He talked big and backed it up in his heyday, and it’s a shame that so many people today are only going to remember a senile television announcer. He was the epitome of cool.

That being said, Waltrip was not better than Allison. Which shouldn’t be controversial, because not a lot of people were better than the leader of the Alabama Gang.

Let me be frank: Allison was a pain in the ass. Excellent driver but just couldn’t stop pissing people off. I love the guy, but literally every other owner he talks about in this book is the worst person ever and was actively trying to sabotage him. Once is enough, two is pushing it, three is a trend.

Where was I? Oh, right, Allison as a driver. Allison was a very good and, most importantly, very smart driver. Allison started out winning short track races in a Chevrolet he and brother Eddie Allison built in his backyard. This was huge at the time because Chevrolet wasn’t involved in NASCAR and no big drivers were using it due to how small and under-powered it was.

But Allison correctly guessed that the bowtie could wheel around faster than the heavier Fords and Plymouths of the day, and that was how the Alabama transplant got his foot in the door of big-time stock car racing.

OK, I’m done with cheap shots. Stats-wise, Waltrip has 84 Cup wins. Allison has 85 Cup wins, with the 85th requiring a very long explanation that can be read here.

Imagine working for 13 different companies in a career doing one job. All of these new cars, new coworkers, new owners. Allison, even though he was a pain in the ass who was feuding with most of them, still won throughout it all.

While Waltrip has more championships, there’s a bit of a caveat. Waltrip spent the vast majority of his career actively racing for a championship. Allison didn’t always have that luxury, wasting years driving part time for Roger Penske. In 1970, Allison was arguably the best driver in the field. However, he lost the championship because he had to skip an early season race at Richmond Raceway; he had a deal with his primary team owner that Allison could field a car in races the owner didn’t enter, and the car just wasn’t ready in time for the race. A decent finish at Richmond would have won Allison another championship, but he had to just settle for second in the point standings.

One of the most underappreciated feats in all of racing began in 1971. That season, Allison won the Southern 500 from the pole, leading 329 laps in a dominating performance.

From that race to the penultimate race of the 1972 campaign at Rockingham Speedway, Allison led at least one lap in every single Cup race. Every. Single. Race. A 39-race streak of leading laps is a near-unbreakable record. It’s not impossible, but it’s up there with Richard Petty’s 10-win streak as far as improbabilities.

Oh, and the best part of that streak? For 30 races of it, Allison drove for Junior Johnson. Waltrip never came close to this kind of week-to-week feat for Johnson. Outside of maybe taking provisionals to start the race, but I just wrote no more cheap shots.

Both drivers are hall-of-fame talents. That’s why both are in the Hall today. But there’s a reason why Allison was in the second class and Waltrip had to wait until the third: Allison was just a little bit better and more versatile than the king of short tracks. ~Michael Finley

He was undoubtedly the brashest, scrappiest and most polarizing character from the Ohio Valley.

Best equivalent to the Kyle Busch persona of today, the ostentatious attitude and driving style of Owensboro, Ky.’s Darrell Waltrip irked the grizzled veterans as soon as he became competitive. While he did have bouts with them, the competitive careers of Richard Petty, David Pearson and Cale Yarborough were winding down, but Bobby Allison still strong as ever, and a boisterous kid like Waltrip was the ever-nagging thorn in his side through the remainder of Allison’s career.

As their paths aligned, Waltrip managed to win at least one race every year between 1975 and 1989 and managed to collect a few more victories in the following decade. That boils down to a lot of winning: 84 victories, to be exact. There is a good reason why he sits comfortably on NASCAR’s list of all-time winners, but as fate would have it, he sits tied for the mark with none other than Allison. Even that is debated.

On paper, their statistics continue to mirror each other. Between the two, Allison probably gets the edge on his larger speedway performance while Waltrip gets the nod for short tracks, most notably headlined by his record 12 victories at Bristol Motor Speedway, including seven straight wins between 1981 and 1984. Both drivers have 59 pole positions apiece. While Waltrip has three championships compared to Allison’s one, Allison makes up for it with three Daytona 500 crowns, while Waltrip has one. Allison’s top fives and top 10s are slightly better in just a few less starts, but Waltrip raced well out of his competitiveness while Allison’s career came to an unexpected end due to injury.

Here is the thing. I can sit and crunch numbers all day between the two of them and have a hard time find a true edge between them, but what tips this debate in favor of Waltrip is the actual timing, successes and evolution of his career.

Waltrip is habitually regarded as the man without a generation. Like so many other things associated with him, fabricated unconventionality fabricated his uniqueness,  as well as the impressiveness of his accomplishments.

To give you a sense of the island his career is upon, when Waltrip came into the sport in the mid-1970s, Petty, Pearson, Yarborough and Allison were ruling the sport. They certainly did not want to be bothered by this loudmouth hotshot. Soon after NASCAR moved away from the big-bodied stock cars in the early 1980s, a full new crop of faces including Bill Elliott, Geoff Bodine and Terry Labonte began to set the world on fire. Waltrip was simply caught in between it. Yet he embraced it.

Between the skepticism of veteran owners and the progressiveness of new faces, the island metaphor comes to life as many turned away from him for various reasons. Only Waltrip could have succeeded. He scraped and clawed his way to the top, despite the opposition. DiGard was the team that first allowed the brash Waltrip to thrive in good equipment. If it was not for an untimely spin by another driver at Ontario Motor Speedway in 1979, the team and driver would have been celebrating their first championship, but even before that, trouble was already brewing.

In typical Waltrip fashion, feathers were being ruffled, but this time, it was internal. Waltrip hated DiGard. DiGard had Waltrip locked in a massive 10-year contract. DiGard was not going to let him out. If we do some simple math, a mad driver plus some serious horsepower equals motivation. The legendary Junior Johnson took notice, and Waltrip soon plopped in one of his cars for 1981. Yes, Johnson was so impressed that he bought the contract and it paid off, beginning the best stretch of his career.

The duo won the championship that same year after winning an incredible 12 races that season, beating — you guessed it — Allison for the top spot. The next year they did it again. They won the championship after winning 12 races, and Allison finished second, of course. While they were stymied in 1983 after Allison claimed the season while driving for none other than the DiGard team, in true Waltrip fashion, he rebounded to claim his third championship in five years in 1985.

But during this stretch, there was still controversy, as Johnson was still concerned with Waltrip and secretly planned to fire him and replace him with a clean-cut, polished young man by the name of Dale Earnhardt (note: sarcasm). Waltrip ultimately departed to Rick Hendrick’s team in 1987, which marked a turning point in his career. Hendrick wanted a veteran in his racing stables and Waltrip had certainly earned his stripes. Allison and Waltrip were growing older, and when Allison was involved in what would be a career-ending incident with Jocko Maggiacomo at Pocono Raceway in 1988, Waltrip started to become the elder statesman figure of NASCAR.

After finally winning the Daytona 500 in 1989, opening his own team in 1991 and expanding his family, Waltrip embraced it. The days of a boisterous racecar driver had vanished. The glory days were starting to fade to as 1990s started to roll along. While he showed glimpses of the classic Waltrip while subbing at Dale Earnhardt, Inc. in 1998, the old soul had run its course. Yet he was still not done after his driving days were over. A long and successful television broadcaster career followed. While he may have overstayed his welcome in both careers, the contributions to the sports Waltrip made put him ahead.

On a broad spectrum, Allison had his share of ups and down, bouncing from ride to ride too. But compared to Waltrip, Allison’s career was stable except for that little skirmish in 1979, of course. If you think about it, Waltrip evolved from a cantankerous loudmouth to a polarizing champion to an elder statesman and finally to a polished guy with a suit and tie. Yet the charm that he had never wavered and the drive to succeed never did either.

What puts him ahead, and whether you like him or not, is that NASCAR is lucky to have the character that is Darrell Waltrip.

Sorry, I had to. ~Zach Gillispie

They ain’t tied – Bobby has 85 wins. And I hope I never again hear that “booger” think that Waltrip yelled every week.

Looks like they’re ignoring the Mustang win too, just like DW because it keeps them tied. Imagine DW’s reaction if NA$CAR got the number right.